It happened last month and again this month.

Another Lutter has been found through DNA testing.

At Ancestry.com, my paternal aunt shares one segment of DNA with someone who had ancestors of German origin living in Newark, New Jersey. This person also shares DNA with a Lutter cousin.

I started the research with Lydia Bischoff, the great grandmother of the DNA match. She was born about 1861 in Germany. In 1876 she married Albin Oeler in Newark. Only the names of the fathers were provided on this document filed with the State: Anton and Hugo. Albin died in Newark in 1891. Lydia remarried Oswald Schoener in 1892. Her mother's name on this record appears to be Henrietta. No surname given.

By 1900, Lydia had relocated to Brooklyn, New York.

Lydia had a brother, Edwin Anton Bischoff (1866-1923). (Coincidentally, I photographed Edwin's grave over fifteen years ago at Hollywood Cemetery in Union, New Jersey as I attempted to trace my Bishop line.) 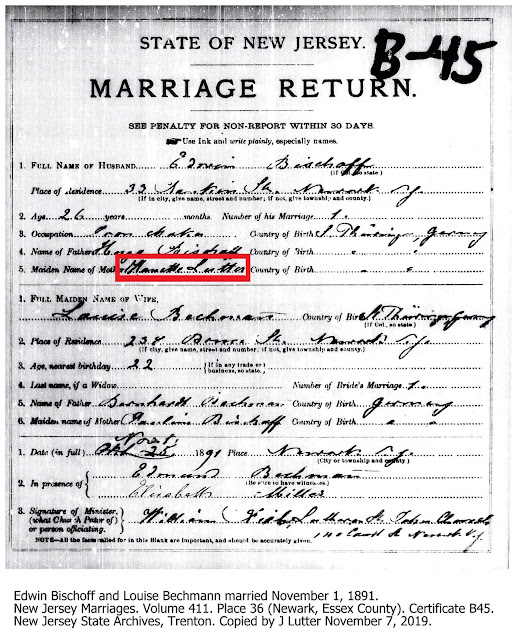 On Edwin's death certificate from 1923, his mother's name is Henrietta Lutter. 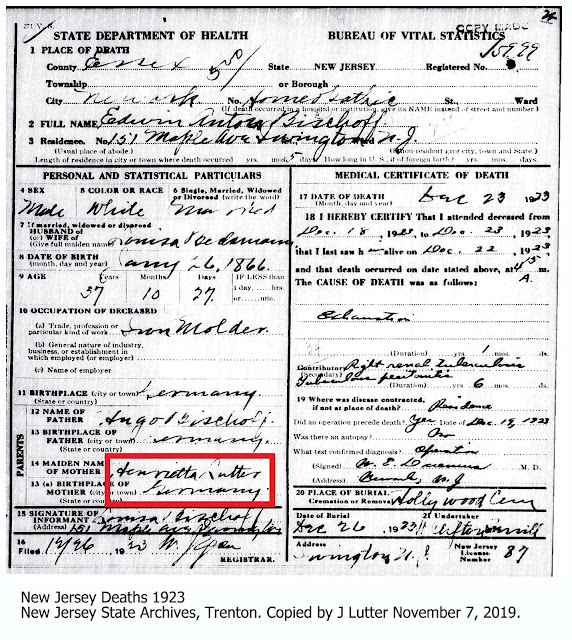 I located Annetta Lutter and Hugo Bischoff in the 1880 census in Newark. Annetta's age was 45, making her year of birth around 1835. I last found them in the 1885 New Jersey state census. Hugo died 1893 and was buried in Woodland Cemetery. I do not know what became of Annetta. Her death certificate could list her parents.

My great great grandfather, Herman Lutter, was born in 1861. Annetta would have been too old to be a sibling. More records are needed to reveal the relationship.