Several people have told me or written to me that they are not understanding this DNA and genealogy.  Here is some of what I have learned since testing my DNA at 23andMe.com.  I continue to learn by reading about genetics and by manipulating the data at 23andMe as well as Gedmatch.  I hope this is understandable without sounding like a biology lecture.


DNA is your genetic material.  Parents pass about half their DNA to each child.  Scientifically tracing a person’s DNA can assist a genealogist in identifying ancestors and descendants of those ancestors.  Submitting your DNA will not produce a family tree.  You still need to continue researching paper records (or digitized images) and visiting cemeteries.  The DNA results that I am presenting from 23andMe are autosomal tests.  This means that the genetic material was inherited from both parents, which in turn was inherited from both of their parents (your grandparents), and so forth.  You likely carry at least a little bit of DNA of all of your ancestors who lived centuries ago.  Some of their descendants, your distant cousins, also carry the same little bit of DNA.  Autosomal DNA testing looks for identical areas of DNA between two people.  When identical pieces are found, the two of you are matched up as genetic cousins.  You then can work together, analyzing your family trees, to discover which ancestor or ancestors you have in common.  Below is the best diagram I have uncovered that illustrates how an individual alive today has DNA comprised of ancestors from a few generations ago. 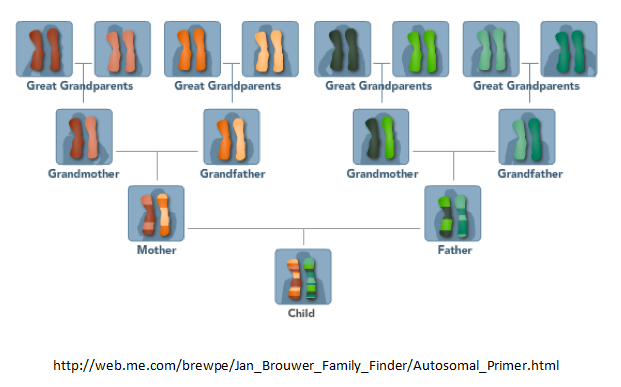 Based on how much DNA you share with another cousin, a prediction can be made on how close a relationship the two of you have. 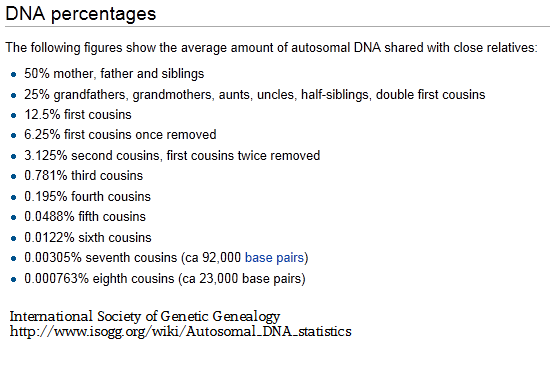 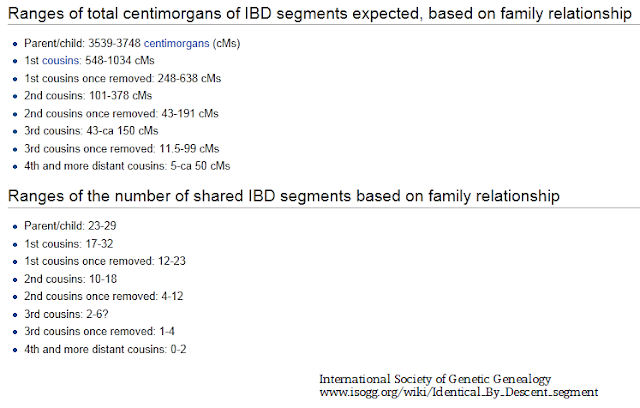 Keeping in mind the above factors, take a look at a typical match of my father.

My father shares 0.10% (that is a tenth of a percent, not ten percent) of his DNA with A. J.  The identical area is on chromosome 15 on one segment covering 7.0 centimorgans (cM).  Using the percentages above, 0.10% puts them between fourth and fifth cousins.  A fourth cousin or more distant would share 5-50 cM.  A third cousin once removed or more distant would share just one segment.  How is A.J. related?  We have no idea.  But that is a typical match for my father.  If they are fourth cousins, they share a pair of great great great grandparents.  To evaluated how possible it could be to identify how A. J. is related, I see how many of my father's 32 great great great grandparents I can identify.  19.  I can name 19 of the 32.  A. J. sees nothing in common with her tree, though she cannot identify all of her 32 either.  That leaves a lot of room for missing the common ancestor.  [I can identify all 16 of my father's great great grandparents.  Four were born in Germany; eight were born in New Jersey; and four were born in New York.  Knowing locations is also very important for noticing links.]
My father’s known third cousin also submitted his DNA.  Here is what their comparison looks like.

They match 0.93%, which is consistent for third cousins.  The cM total is 69.5 and within the 43-150 cM range for third cousins.  The match is on two segments, which is consistent with a third or more distant cousin.  Their DNA comparison is exactly on target for their relationship as supported by documentation.  They share a pair of great great parents.  We do not know, though, if the DNA shown above matches great great grandpa Calvin Cook or great great grandma Mary Neal.
Next compare a typical match for my mother.

A. L. and my mother share 0.34% of their DNA.  This would make them between third and fourth cousins.  They match on four segments, which is consistent with a second cousin once removed through a third cousin once removed.  Yet A. L. is predicted to be a DISTANT cousin.  Why?  Because of the total cM, which is 24.5 and more consistent with a fourth or more distant cousin.  Matching on several tiny segments is indicative of ancestors who intermarried.  A. L. was born in the United States, but wrote us that both sides of his family lived in the same little towns in Latvia and Ukraine for many generations and were Ashkenazi Jewish.  How is A. L. related?  We have no idea.  My mother currently has over 1300 genetic cousins in the system.  1100 of them match on two segments or more.  My father, for comparison, has 670 matches.  27 of them match on two segments; one matches on three segments; and I match him on 24 segments.

I hope that this tutorial helps you better understand my DNA presentations here.  Other than my father’s known third cousin and my mother’s brother, I have not discovered the connections to any of my genetic matches, but I am getting closer every day.  The more ancestors that you have identified, the greater your chances of success.
Posted by Jody Lutter at 12:07 AM