Another useful function of the expanded comparison abilities at 23andMe is comparing people who match both my father and his third cousin.  The most recent common ancestors were born around 1830 in New Jersey, Calvin Cook and Mary Neil.  Calvin's lines were in New Jersey and New York several generations before Calvin, while Mary was likely of recent Irish descent. 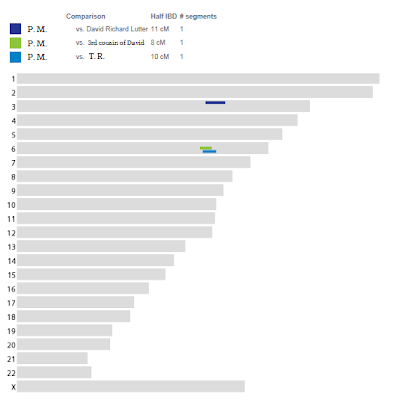 In the above graph, P. M., who lives in Ireland, matches David and David's third cousin, as well as T. R, who is also from Ireland.  T. R. matches both David and the third cousin (not shown).  Mary Neil represents David's only Irish branch.  Thus, P. M. and T. R. likely match David through one of Mary Neil's lines.  The question remains:  which of Mary's ancestors was also an ancestor of P. M. and T. R.?
Posted by Jody Lutter at 12:59 AM