In your research you may get snagged by the Two Wives, Same Name situation.  One wife dies and the husband remarries to a woman of the same first name.  You may not realize that you are dealing with more than one wife or you may mix up records of one for the other.

Let me use Charles Lutter as an example.  Charles, also known as Carl or Karl, was born in the 1860s in a German area of Europe and settled in Newark, Essex County, New Jersey as a child.  To add confusion, there appears to be two contemporaneous men of this name and age in Newark, plus other men in later generations with this same name.  I am still sorting these lines.

Charles had a son named Elwood Lutter (1905-1989).  This is a rather unique name among the Lutters and easier to trace.  I especially remembered this name because many years ago, someone from Salt Lake City called my home, seeking information on Elwood and the Lau family.  (I think my father is one of the few remaining people in Essex County using the surname Lutter.) 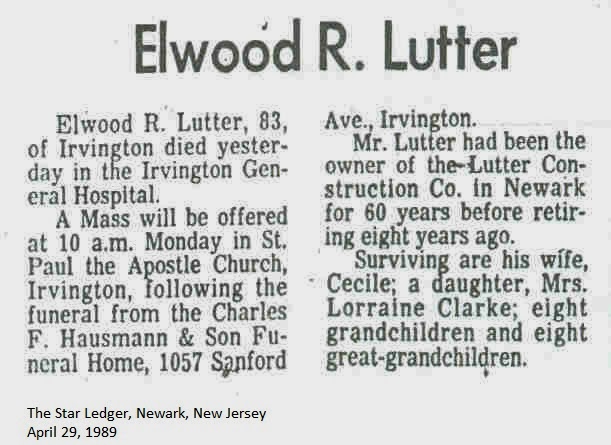 In the past, applications for Social Security numbers were cheap and easy to obtain.  Elwood's application cost $7 and provided me with the names of his parents, Charles K Lutter and Anna Lau. 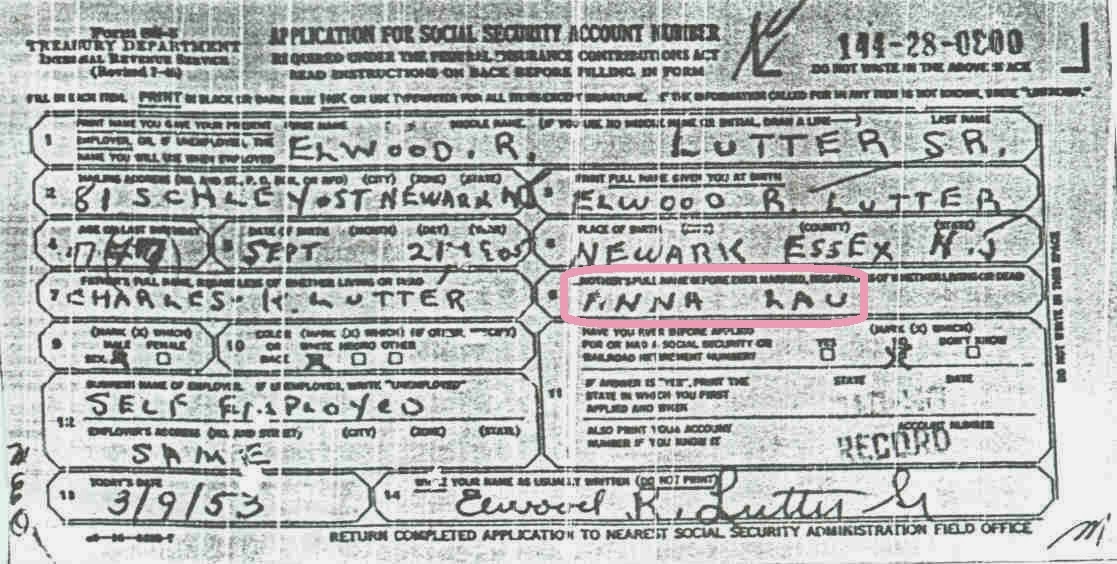 This family is seemingly easy to identify in the federal census from 1900 through 1930 by searching for Elwood or his siblings, Elizabeth, Florence, Charles, and Robert.


The 1920 census is quirky.  First, the family is in no longer in Newark, but rather in Keansburg, which is in Monmouth County, New Jersey.  Also, Anna's birthplace has changed from Germany to New Jersey.  This is accurately carried over to the children's rows- mother born in New Jersey.  In addition, Anna's mother, Minnie or Wilhelmina, is living with them, with a last name of FREY.  Not quite LAU, but this is okay.  I've seen wackier entries in the census.

In the 1930 census, the family is back in Newark, minus the mother-in-law.  Anna's birthplace is still New Jersey.  There is a discrepancy with the marriage information.  Charles is 7 years older than Anna; but he was first married (does not mean to the listed spouse!) at age 20, while Anna was 30 years old at her first marriage.  With these numbers, their first marriages were not to each other.  But I've seen far greater discrepancies that were simple attributable to errors in the census. 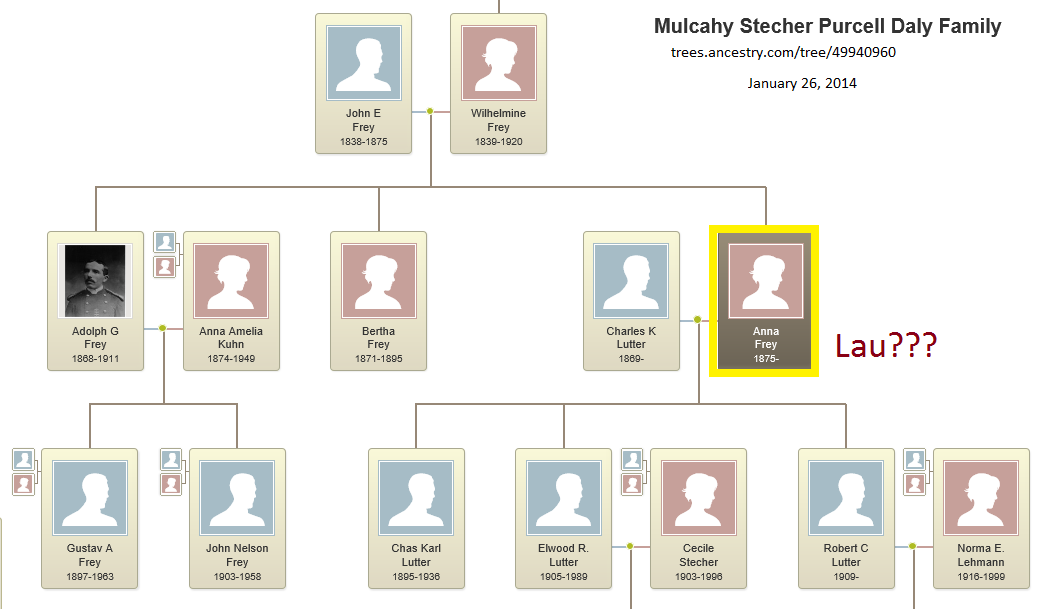 Great to hear from the Frey family.  My question:  Why did Elwood Lutter list his mother as Anna Lau and not Anna Frey?  Answer:  Don't know.

More research required.  I looked for the birth certificates of the five children born to Charles Lutter and wife Anna.  I found four of them.  All listed the mother as Anna Lau, not Frey. 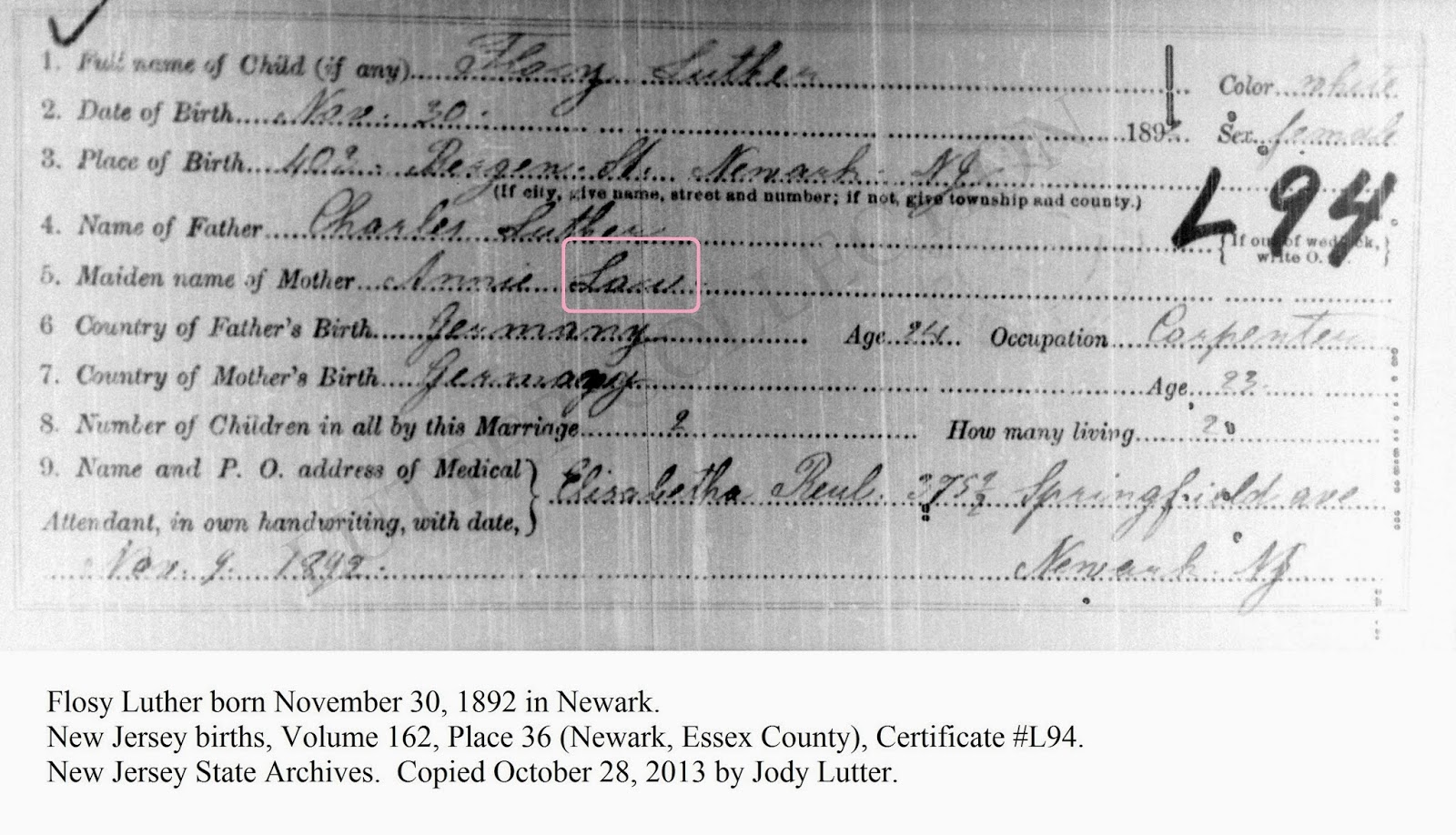 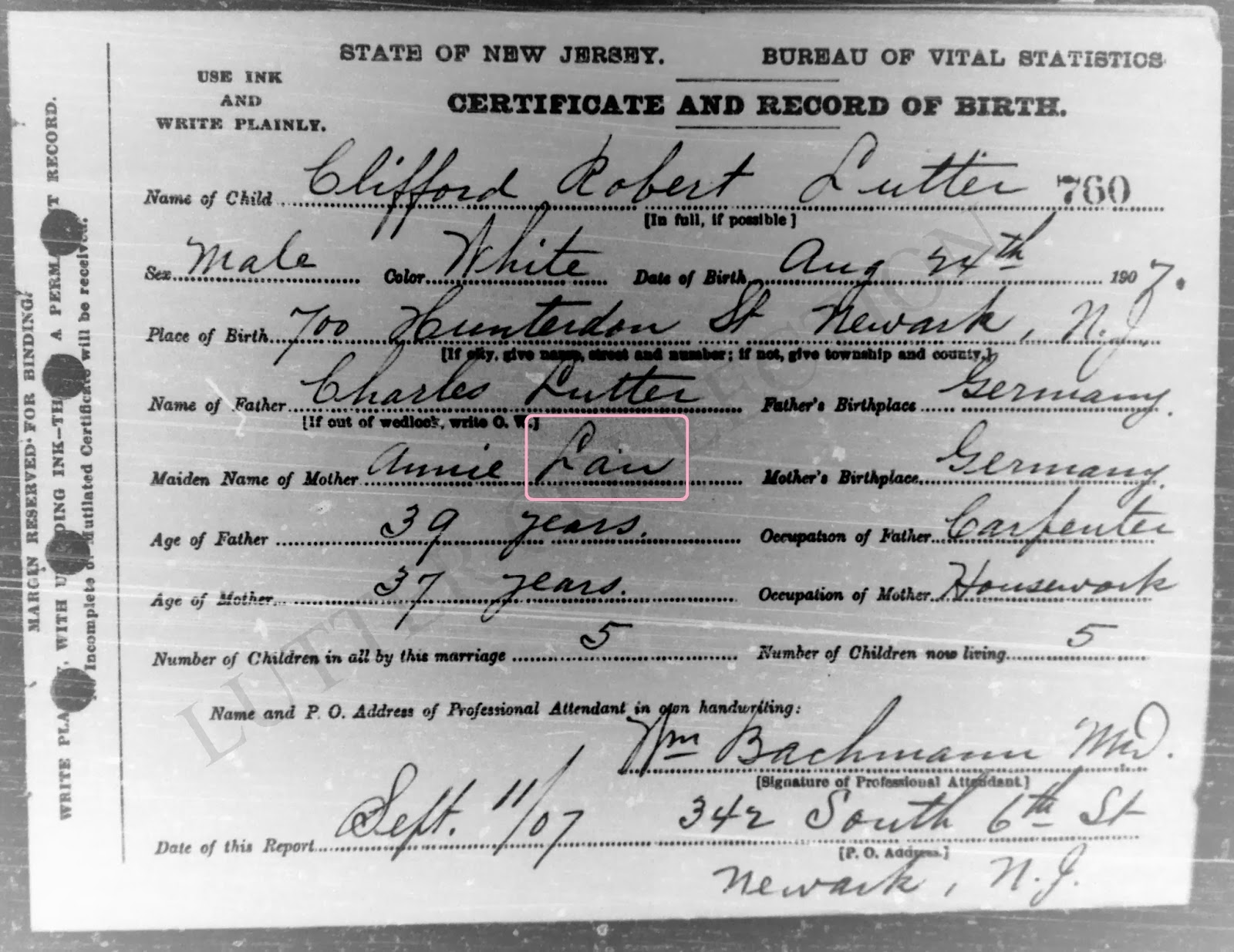 My first thought was that I had mixed up the two men named Charles Lutter.  I thought that the other Charles Lutter had died in 1912 and was buried at Fairmount Cemetery in Newark.

The other possibility was that the first wife died and Charles remarried to another woman also named Anna.  This would have occurred between the 1910 and 1920 census recordings, when Anna's birthplace "changed" from Germany to New Jersey.

These Lutter branches are not lacking in women named Anna.  I had plenty of women to reconsider if Anna Lau/Frey had not lived to see the 1920 census.  In a grave at Woodland Cemetery in Newark, marked only with a blank white stone and one marked stone, I had a good candidate:  Anna Lutter, died 1914.  Only her stone, fallen flat on the ground, remained in this Lutter plot at Woodland Cemetery.

Next I located the 1914 death certificate for this Anna Lutter.  She was indeed Anna Lau.

I have not found a marriage record for Charles Lutter to either wife.  Charles would have married Anna Frey after the death of Anna Lau in 1914 and before the 1920 census.

When someone's wife changes her information, but not her name, from census to census, you may want to consider a remarriage to another woman with the same given name.