Trend is to Release Records, Not Restrict

New York City is seeking to limit public availability of birth and death records to 125 and 75 years after the event, respectively, according to a news action email I received from the New York Genealogical and Biographical Society. 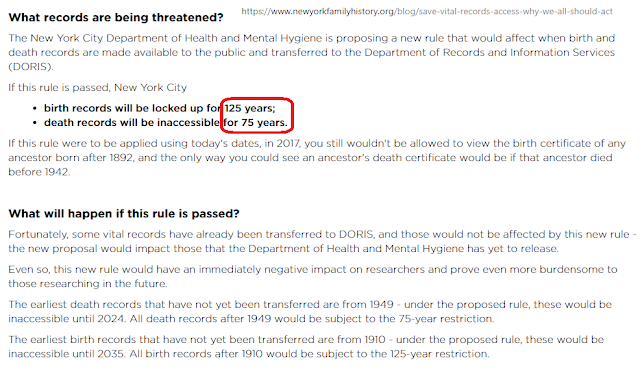 I sprang into action and so can you. I signed the petition to not further limit access.

I also wrote a letter. A form letter is already drafted.  I modified it to suit my needs, which swung much further than the NYG&B Society.

- A free, online, public index of births, marriages, and deaths within one year of the event.

- Digitization of individual certificates of births, marriages, and deaths and digitization of the indexes and older ledger books AND free, online, public access with some restrictions on recent births and marriages.

I don't think this is shocking or unreasonable in today's digital age. People who do not do genealogy are horrified when I describe what I have to go through, in terms of traveling and paying, to obtain a vital record. You have to pay for a vital record in New York. At least in New Jersey I can browse rolls of microfilm (remember the 1960s? I don't because I wasn't born yet) for free, snap a picture with my phone, and then hurl the image six decades ahead into the year 2017. Too bad if you can't visit Trenton.

Back to New York City. The web address keeps changing for the Municipal Archives. Below is a screenshot of what records they will provide. The cost is $15 per record, plus $2 for each additional year or borough searched. The birth records have remained steady at "before 1910" instead of one hundred years. Reclaim the Records plans to file for the release of the birth certificates for the years 1910 through 1917. 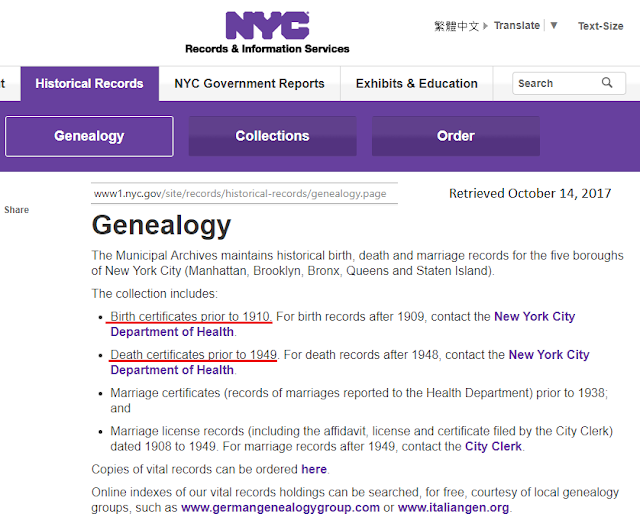 Ironically, Ancestry.com recently released an index of births of New York City for the years 1910 through 1965. Some of the images are of very poor quality, so I recommend looking at the actual images of the index and not merely relying on Ancestry's index of the index.

If you think that this is shocking to release a "recent" index of births, it is not unusual.  Here is California's index of births, marriages, and deaths through 1980 at Ancestry.com. The images link to the index, not the actual certificates.

Pennsylvania released its actual death certificates through 1964. No need to travel to Pennsylvania and sit at a microfilm reader. No need to pay for a certificate, wait months, then find out it's the wrong person and try again. This is fantastic. 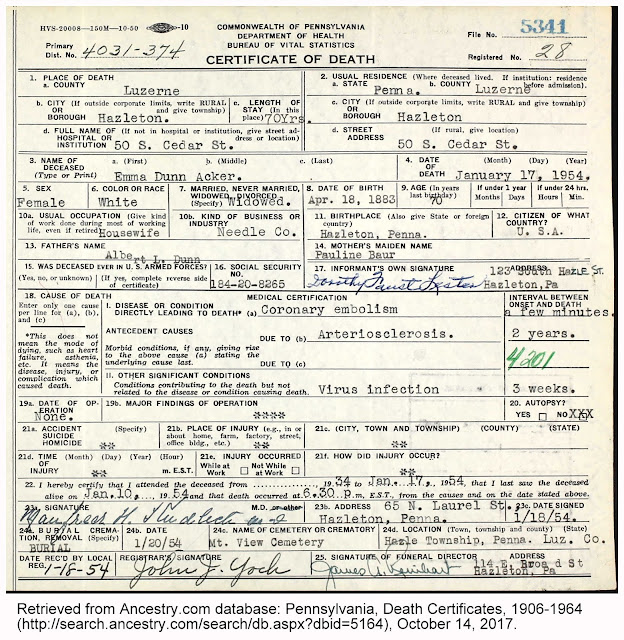 Am I really asking for the moon for New York City (and New York State and New Jersey) to digitize and release its birth, marriage, and death records? I think not. The information is creeping out there through many outlets. Genealogists need legitimate, reliable resources for our work in the form of official government documents. We have online obituaries with loads of information, such as decedent's date of birth, spouse, and the names of living children and grandchildren. Find A Grave is another growing resource whose only requirement for posting is that the person is dead (and not a duplicate memorial).

Maybe there is hope for my home state. Reclaim the Records has secured and released the New Jersey index to marriages from 1901 through 2016. Yes. Through last year.