A great way of collecting a bunch of death dates for a family branch is to locate the family burial plot. I found a notice of the death of Van Rensellear Terry in the New York Times for 6 January 1857 and found out that he was buried at Cypress Hills Cemetery in Brooklyn. An inquiry to the cemetery resulted in the exchange of $30 for a handwritten transcription of the burials in the plot. 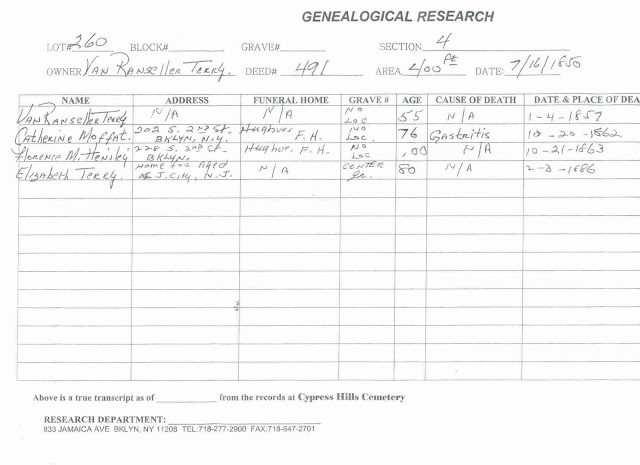 Was the month October or December for Catherine Moffat?  I was not finding the obit.  Was Florence Heniley 100 years old?  I was not finding ancient Florence in any census.
I visited the cemetery and had no qualms questioning the transcription. I paid my money and I needed an accurate account of the occupants of the plot. The date of death for Florence was confirmed to be zero, not 100. That still didn’t help. Babies aren’t zero. They are stillborn, one day, one hour, two weeks, but they are not zero. I visited the plot.

Next to the plot was a huge dugout crater. I didn’t fall in, but photographing became dangerous from certain angles. The hole was way deeper and wider than the mythical six feet under.

Email ThisBlogThis!Share to TwitterShare to FacebookShare to Pinterest
Labels: cemetery