Bessie Cook appears in the 1910 and 1920 censuses with her father, Charles.  I have no other records for her.  I don't know if she married, moved, died, nothing.  Using an estimated birth year of 1906 in New Jersey, I searched for her birth certificate.

I probably found it.  I say probably because the birth certificate that I found is for a baby girl with the last name of Cook, born 4 March 1906 at 231 North 4th Street in Newark, New Jersey.  At some point, she must have been named Bessie, or Elizabeth- we don't know.  For some of the other babies born without a first name, they have an amendment to their birth certificate, giving them a first name.  Not Bessie. 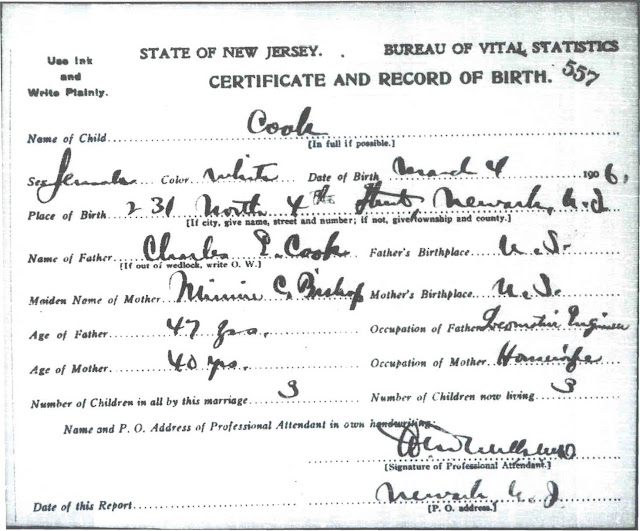 Plugging this exact date of birth into the online Social Security Death Index gives us several possible matches for Bessie or Elizabeth.  Those who died 1997 or earlier in California can be eliminated when the names of the parents are viewed.  Others can be eliminated based on their information as listed in the 1930 census.  That gives us a shorter, but not definite, list of possible Bessie Cooks to choose from.  Or she may still be alive and not listed in the death index yet.  She will be located eventually.
Posted by Jody Lutter at 10:20 AM