A bundle of papers kept by an older relative could be a treasure chest.  I have a few items from past generations.  One is a funeral card for Katherine Powers, died 22 September 1952.  The funeral home was M. J. Corrigan of Jersey City. 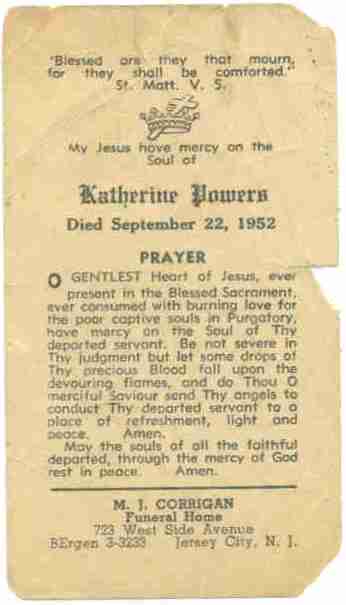 Who is Katherine Powers?  I do not know.  I have asked living family members (usually a good place to start).  Nobody knows.  "Maybe a neighbor," was one reply.  On my next trip to Jersey City, I will have to look for an obituary.  I don't know if Powers was her married name.  None of the Katherine Powers in the 1930 census stand out as a good match.  Why was this funeral card kept, while other important documents did not survive?  I will eventually find out.
Posted by Jody Lutter at 10:01 PM