Until recent times, deaths of young people, including babies, was not uncommon.  It is very easy to miss several children of a marriage if they their short lifespan was in between census years.  I try to collect all members of a family, even those who did not marry and have children.  They reveal naming patterns and can lead you to undiscovered family plots and addresses.  In New Jersey, birth records were not recorded until the late 1800s, and most births did not start to get reported to the state until the early 1900s.  The State of New Jersey has no official online index to search for these births, though familysearch.org does publish some births for New Jersey.

Johanna V. Bossert was one such child.  I did have an entry for her at Woodland Cemetery in Newark, New Jersey, but she was buried in the baby section with no headstone and no other family buried with her.  She had no death notice in the Newark Evening News.  I did not know whose child she was.  I found her death certificate by searching the microfilm reel for 1912 for another Bossert.  (Death certificates in New Jersey are mercifully filed alphabetically starting around 1900.)  Because she was only one year old at death, she was not around to appear in the 1910 census, and gone by the 1920 census.  Now I know that Johanna was an important name in this family, though she remains the only person discovered so far bearing this name. 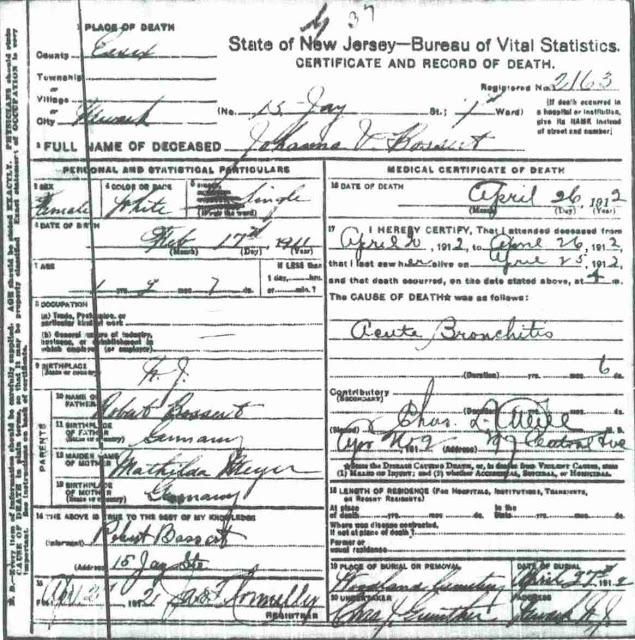