Deed Book for New York County (State of New York)
Liber 362.  Pages 294 and 295.
This is to Certify that I have this twelfth day of February 1835 Let and rented unto John H Duryea the house now occupied by him No 309 Spring Street with the agreement that should the house be burnt down a new one shall be erected with all proper speed and if it shd be partially destroyed it shall be repaired should it be necessary to erect a new building said John H Duryea is not to pay rent while it is building with the appurtenances and the sole and uninterrupted use and occupation thereof for the term of five years to commence the first day of May 1835 at the yearly rent of five hundred & fifty dolls and City taxes payable quarterly.  Thos Van Zandt witness Ledyard Avery.  City and County of New York.  SS.  On the eighteenth day of June 1836 before me came Ledyard Avery proven to my satisfaction to be the individual who is the subscribing witness to the within Lease by the oath of George Cregier who being by me sworn said that he resides in the City of New York and that he knew him to be such person & the said Ledyard Avery being by me sworn said that he was present and saw Thomas Van Zandt to him known to be the individual described in and who executed said Lease sign and execute the same that he subscribed his name as a witness thereto and that he resides in the City of New York.  Wm G Wood, Commissioner of deeds, N.Y.
Recorded the preceding at the request of S. C. Duryea the 30th day of June 1836, at 1/4 past 3 P.M.
Wm H Burn, Rg

Know all Men by these presents that we Sarah M Duryea executrix & Van Rensalear Terry, Executor, of the last Will & Testament of John H Duryea, late of the City of New York, grocer, deceased, for the consideration of the sum of Seven hundred Dollars to us in hand paid by Stephen C Duryea & John Place, both of said City, grocers, the receipt whereof is hereby acknowledged, have bargained sold assigned transferred and set over and by these presents do bargain sell assign transfer & it over unto them, the said Stephen C Duryea & John Place, their executors administrators & assigns.  All that certain agreement or Lease which is hereunto annexed for the house No. 309 Spring Street in said City lately occupied by the said John H Duryea, deceased, which said Lease bears date the twelfth day of February one thousand eight hundred & thirty five & was made & executed by one Thomas Van Zandt to the said John H Duryea for the term of five years from the first day of May 1835 at the yearly rent of Five hundred & fifty dollars & City taxes payable quarterly together with all the right title & interest of the said John H Duryea at the time of his death & if us the said Executrix & Executor as aforesaid since that time of in & to the said leasehold premises & every part & parcel thereof with the appurtenances To Have and To Hold the said assigned premises unto them the said Stephen C Duryea & John Place their executors administrators and assigns as fully to all interests & purposes as we have a right to assign & convey the same from the first day of May last for & during all the rest residue & remainder of the said term of years in & by the said agreement or Lease mentioned & described Subject however to the payment of the City taxes on said house & the annual rent of five hundred & fifty dollars during the remainder of said term to the said Thomas Van Zandt, his heirs or assigns as in & by said Lease is reserved and contained which said rent and taxes are to be paid by them the said Stephen C Duryea & John Place, their executors and administrators & assigns.

In Witness whereof we the said Executrix & Executor have hereunto set our hands & seals the twenty third day of June in the year of our Lord one thousand eight hundred and thirty six.  Sarah M Duryea, Exectr (LS).  Van Rensselaer Terry, Execr (LS).

Sealed & delivered in the presence of the word "Annual" or 2d page being interlined.
Witness John Orser.  State of New York City & County of New York.  SS.
On the 30th day of June AD 1836 personally came before me John Orser, the subscribing witness to the foregoing instrument, to me known, who being by me duly affirmed, did depose and say that he resides in the said City that he knows Sarah M Duryea and Van Rensselaer Terry, the persons described in and who executed the said Instrument that they acknowledged severally in his presence, that they executed the same for the uses and purposes therein mentioned, and that he thereupon became a subscribing witness thereto.  Daniel J Parker, Com of deeds.
Recorded the preceding at the request of S C Duryea the 30th day of June 1836 at 1/4 past 3 PM.
Wm H Burn, Rg 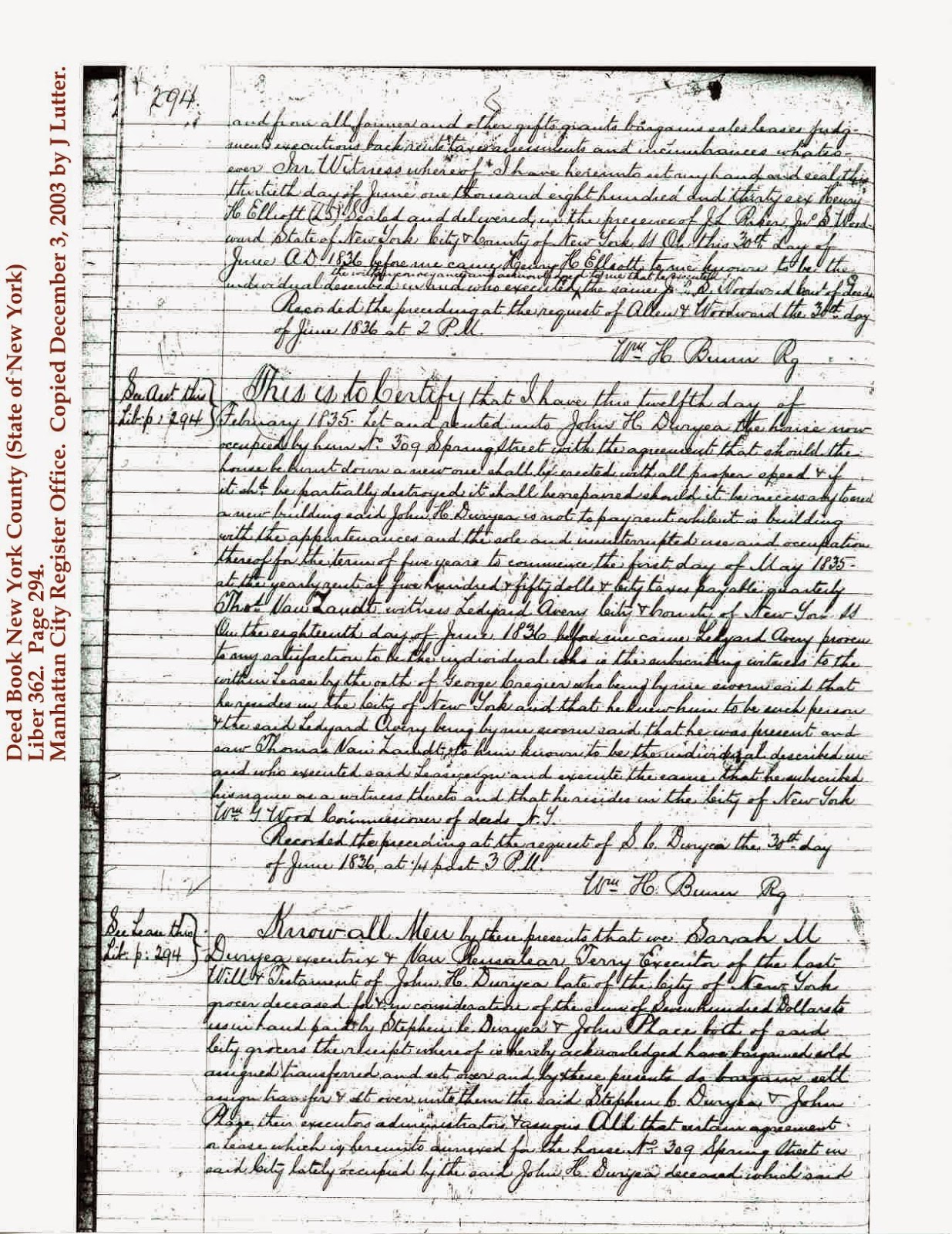 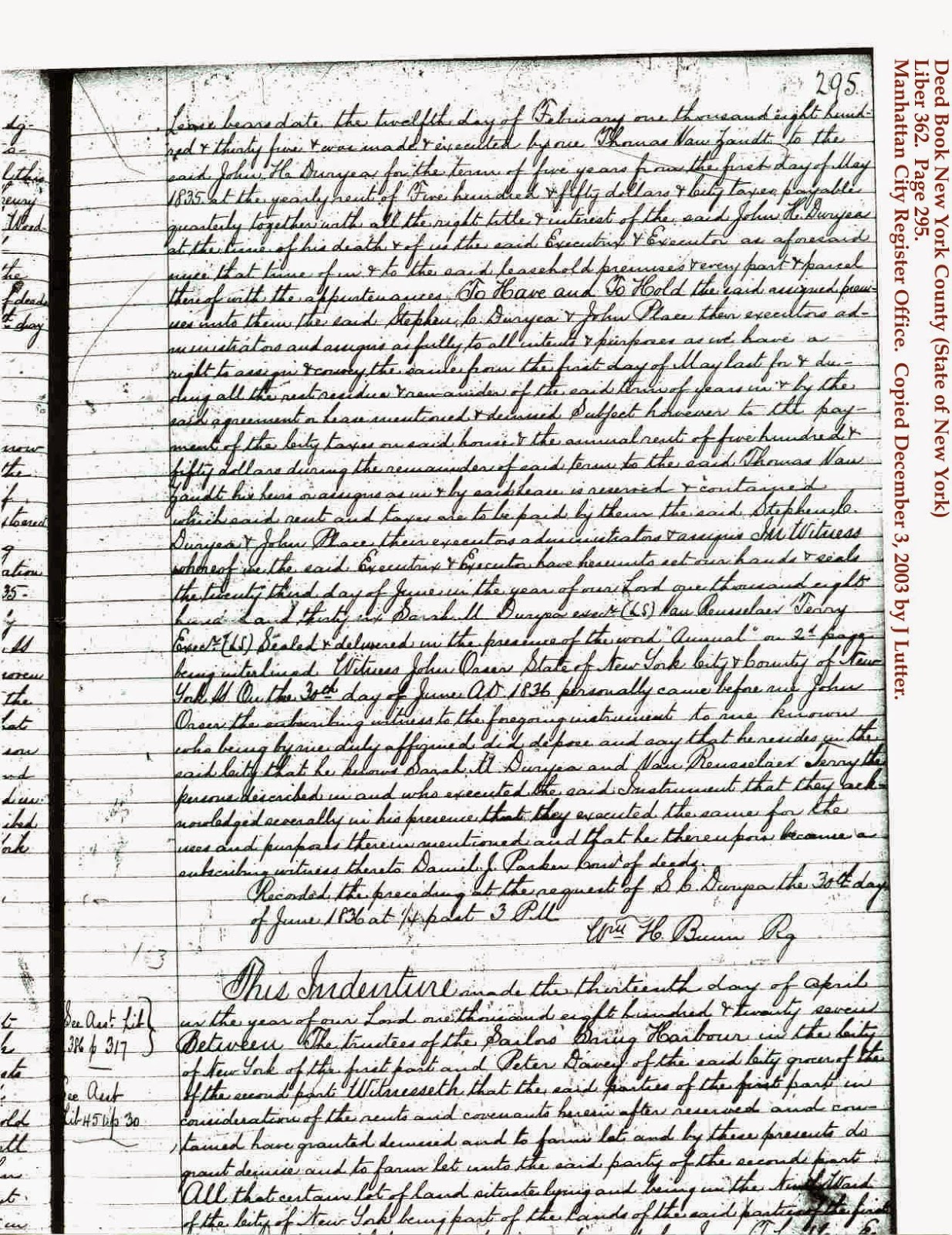