Amanuensis Monday: 1782 Will of Jacob Duryee of New York City

His Excellency James Roberston Esquire, Captain General and Governor in Chief in and over the Province of New York and the Territories depending thereon in America, Chancellor, and Vice Admiral of the same, and Lieutenant General of his Majestys Forces.

To All to whom these Presents shall come or may in any wise concern.  Sendeth Greeting.

Know ye that at the City of New York on the day of the date hereof, before Gary Ludlow Esquire thereunto Delegated and appointed, the last Will and Testament of Jacob Durye, Deceased, (a Copy whereof is hereunto annexed), was proved and is now approved and allowed of by me; and the said Deceased, having whilst he lived and at the time of his Death, Goods Chattels and Credits within this Province, by means whereof the proving and Registring the said Will, and the granting Administration of all and singular the said Goods Chattels and Credits, and also the Auditting allowing and final discharging the account thereof doth belong unto me; The administration of all and singular the Goods Chattels and Credits of the said Deceased, and any way Concerning his will, is granted unto Thomas Stagg and Harry Peters, two of the Executors in the said will named, who are duly sworn well and faithfully to administer the same, and to make and Exhibit a true and perfect Inventory of all and Singular the said Goods Chattels and Credits, and also to tender a Just and true account thereof when thereunto Required.  In Testimony whereof I have Caused the Prorogative Seal of the Province of New York to be hereunto affixed at Fort George in the City of New York the Twelfth day of August One thousand seven hundred and Eighty two. --- Jam Bayard Jun

In the Name of God, Amen.  I, Jacob Duryee, of the City of New York, being of sound disposing mind and memory, blessed be God therefore, Calling to mind the Mortality of my Body and that it is appointed for all men once to die, do make and ordain this my last will and Testament in manner and form following.

Principally and first of all, I give and recommend my immortal Soul into the hands of Almighty God that gave it me; and my Body to the Earth to a decent Christian Burial, nothing doubting but at the General resurrection, I shall receive the same again by the mighty Power of God; and as touching such worldly Estate wherewith it has pleased God to bless me with in this life, I give and Devise in the following manner and form.

Item.  I will that all my Just Debts and Funeral Charges be first of all duly paid and satisfied by my Executors herein named.

Item.  I give and bequeath unto my Dearly beloved wife, Sarah, the full and Sole use and benefit of my Estate, real and personal, to be by her enjoyed so long as she remains my widow, she maintaining and providing for my young and unmarried Children, and Committing no waste therein.

Item.  If my well beloved wife Sarah should compleat a second marriage in that case I give and bequeath unto my Dearly beloved wife Sarah, the full use of, that is to say, the full Interest of Two hundred pounds Currant money of New York, also the full use of one Compleat Bed and Furniture, one Silver milk pot, one Silver Sugar pot, one Teatable, one set of China, six Silver Teaspoons, four Silver Table Spoons, one large looking Glass, one Cubboard of Cloaths Press to hold to her during her natural life and this I give her in full Barr of all Claim and Demand she my said Wife may or can make to or on my Estate, Real or Personal, for her Right of Dower.

Item.  I give and bequeath unto my Son Jacob, for his Birth right, the sum of One hundred pounds Currant money of New York, also my Silver Tankard, silver watch and all my wearing apparel, also my Negro Boy Jack.

Item.  Whereas my Eldest Daughters Catherine and Mary have each had an Outset, of the Value of One hundred and thirty pounds Each outset, I will and Order that every one of my Children that are unmarried at my Decease may have the Sum of one hundred and thirty pounds for their outset each paid to them out of my Estate by my Executors at their marriage or when they arrive at the age of Twenty one years.

Item.  I give an bequeath unto my Daughter Sarah, after the death of my beloved wife Sarah, my Negro wench Clarin, also one cloaths press, but if my Daughter Sarah dies without heir, I will that the said Negro wench and cloths press be sold, and the monies equally divided among my other Children or their Heirs.

Item.  If my son Jacob should want money to put himself into Business, I do order and desire my Executors to give him every prudent assistance out of my Estate.

Item.  I do will and order that after my Decease at some convenient time at the discretion of my Executors, all my Estate, Real and personal, be sold by my Executors and the monies arising from the sale thereof be by my Executors divided into seven equal parts.

Item.  I give an bequeath unto my Daughter Sarah a double portion, or two seventh equal parts of all my Estate, real and personal, and this double portion I give her in consideration of her helpless Condition.  Also I give and bequeath unto my beloved Children, Catherine, Mary, Magdalena, Jacob and Jain, each one Equal seventh part of my Estate, real and personal, to them, my said Children, Sarah, Catherine, Mary, Magdelena, Jacob, & Jain, in the parts proportions before Expressed, to their Heirs and assigns for ever; Nevertheless if any of my said Children should die before the marry and under the age of Twenty One years without heirs, I direct that their share part or parts be equally divided among my Surviving Children or their Heirs.

Item.  I do hereby authorize my Executors hereafter named to sell and dispose of all my Estate, real and Personal, and to give Good and Sufficient Deed or Deeds of Conveyance for the same and the Monies arising from Such Sale to be divided and disposed of among my said Dearly beloved Children, Sarah, Catherine, Mary, Magdalena, Jacob and Jain, in the manner and form before mentioned, and if in Case any of my said Children shold at the Time of Such Sale, be under the age of Twenty one years and unmarried, I will and Order that in that case the part or portion of such Child or Children coming to him or them by this my Will and Testament, be by my Executor hereafter named out to Interest on Good Sufficient Land Security for the benefit of such Child or Children untill such Child or Children shall marry or attain the age of Twenty One years.

Lastly I ordain constitute and appoint my Dearly Beloved Wife Sarah, and my Son in Law Thomas Stagg, my beloved Son Jacob Duryee and my Nephew Johannis Norestrant and Harry Peters, Executors of this my last Will and Testament, and I do hereby disanul and revoke all and Every other Will, Testaments Legacies and Executors by me at any time below named willed and bequeathed, ratifying and Confirming this my last Will and Testament.

In Witness whereof I have hereunto set my hand and affixed my Seal, this the Twenty Eight Day of January in the year of Our Lord one thousand and seven hundred and Eighty two.
Jacob Durye LS  Signed Sealed published and declared by the said Jacob Duryee, as his last Will and Testament, in the presence of us, who in his presence and in the presence of each other have hereunto subscribed our names.
The word (Sarah) between Fifth and sixth line of second page, being first interlined and the word (and) in third page being first obliterated, and (Johannis Norestrant) first Interlined.
Abrm Polhemus, Danl Van Vlack, Richd Fletcher.

City and County of New York
Be it Remembered that on the Twelfth day of August one thousand seven hundred and Eighty two, personally appeared before me Gary Ludlow, Surrogate for the City and Province aforesaid, Daniel Van Vlack of the City of New York, Cordwainer, who being duly sworn on his oath declared that he saw Jacob Durye sign and Seal the before Written Instrument, purporting to be the will of the said Jacob Durye, bearing date the Twenty Eighth day of January last, and heard him publish and declare the same as and for his last Will and Testament.  That at the Time thereof he the said Jacob Durye, was of sound disposing mind and memory to the best of the Knowledge and belief of him the deponent, and that his name subscribed to the said Will, is of his own proper handwriting which he subscribed as a witness thereto in the Testators presence.  And that he the Deponent likewise saw Abraham Polhemus and Richard Fletcher the other Witnesses to the said Will subscribe their names as witnesses thereto in the Testators presence.
Gary Ludlow, Surr 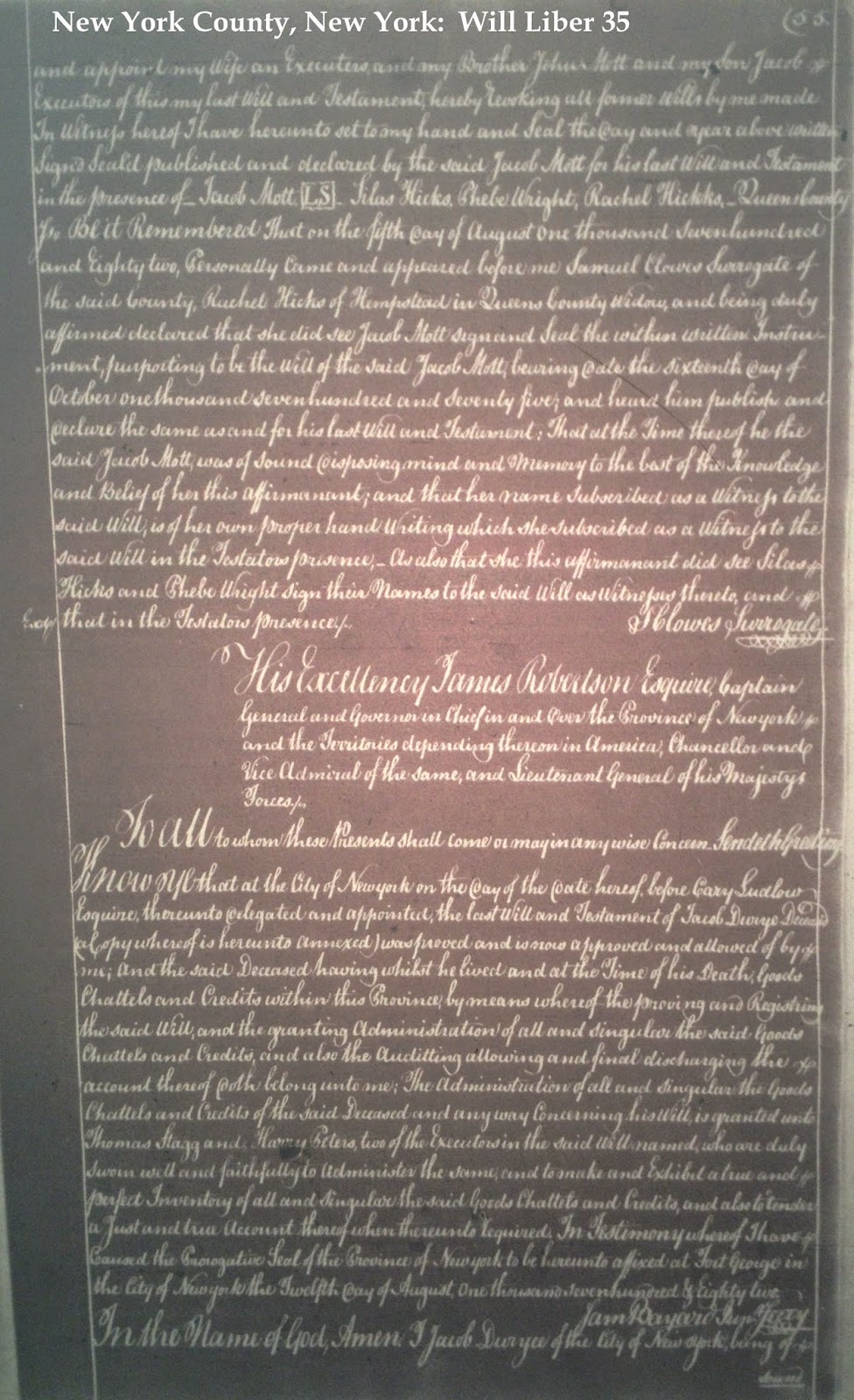 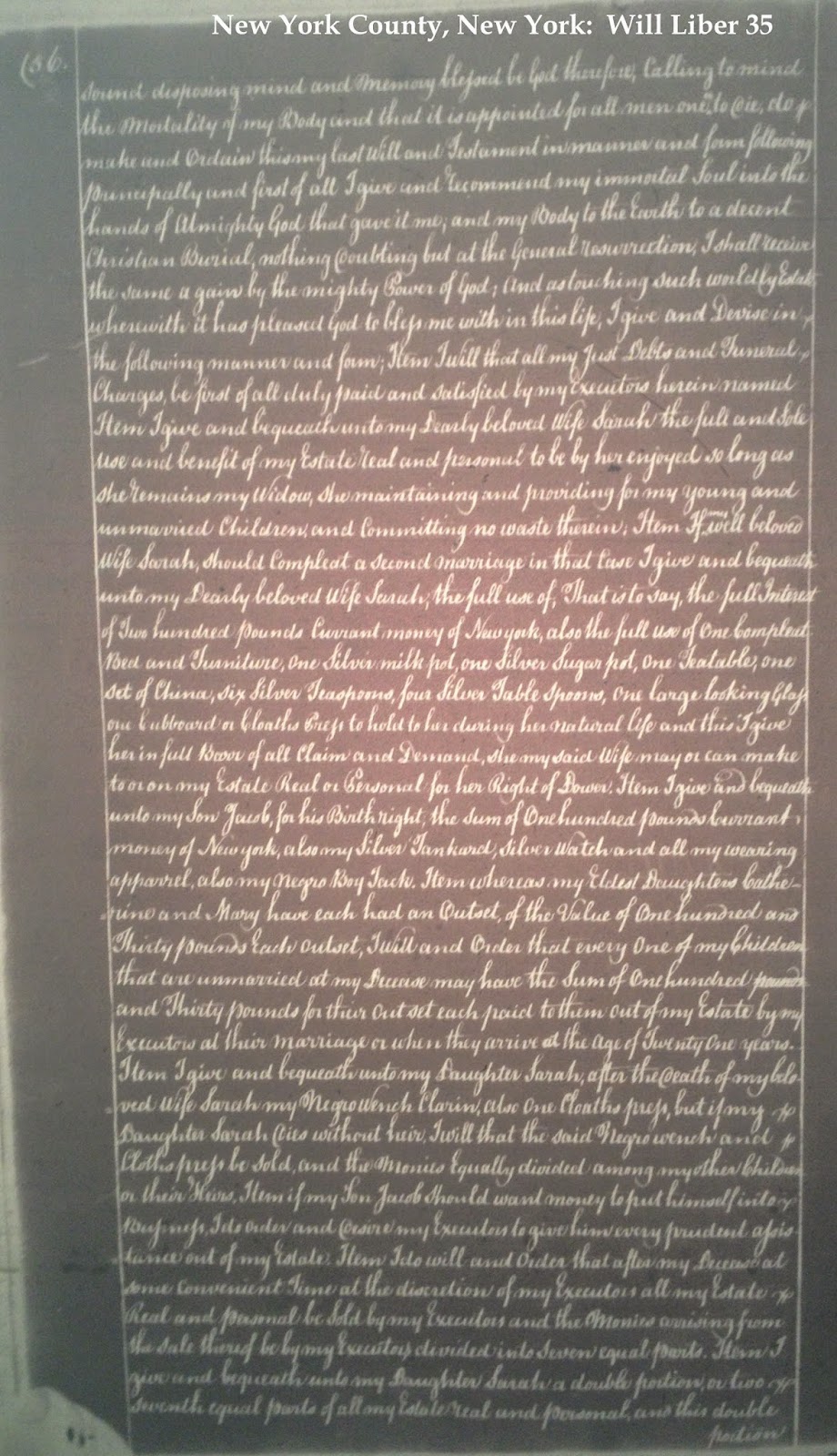 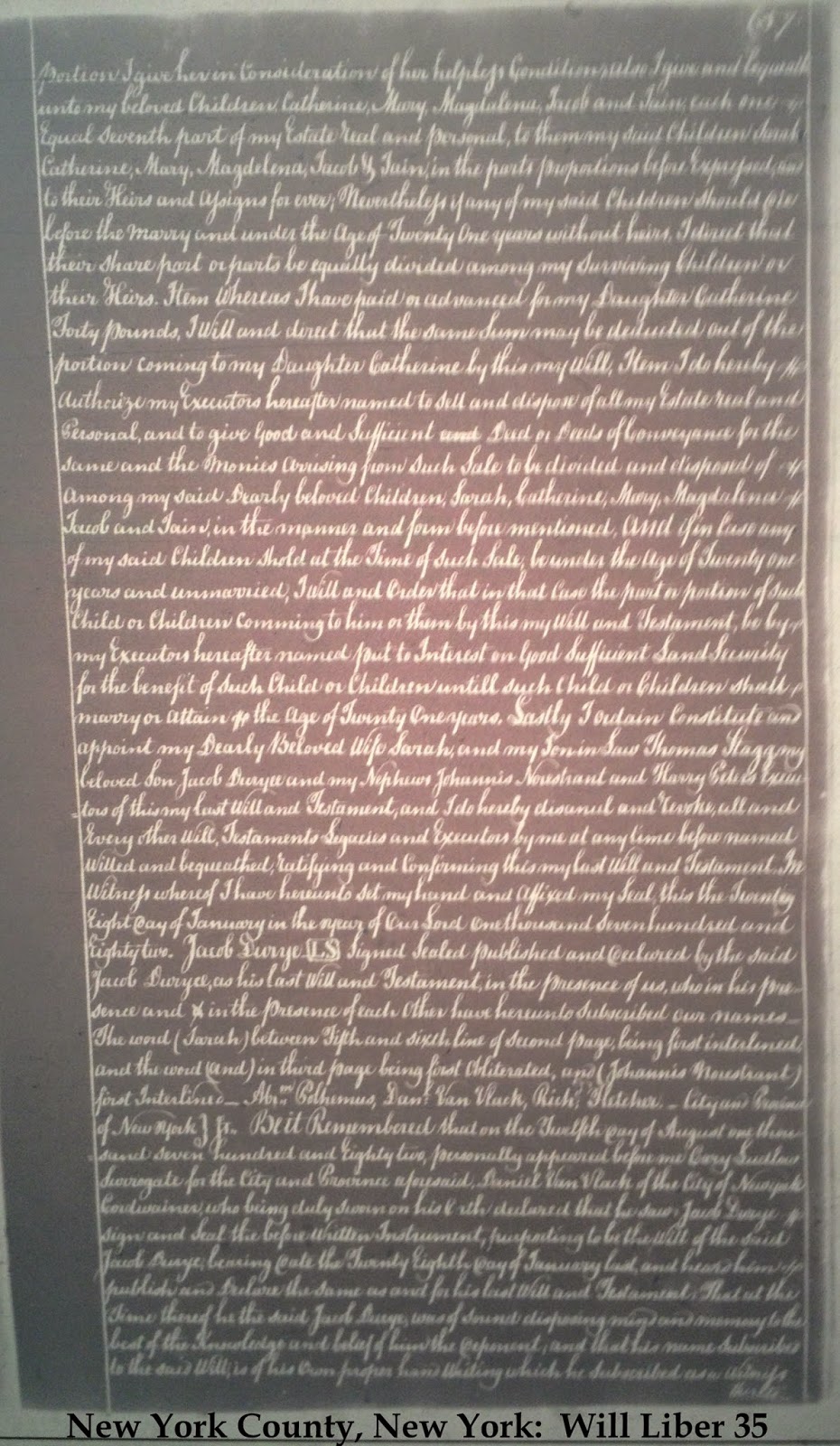 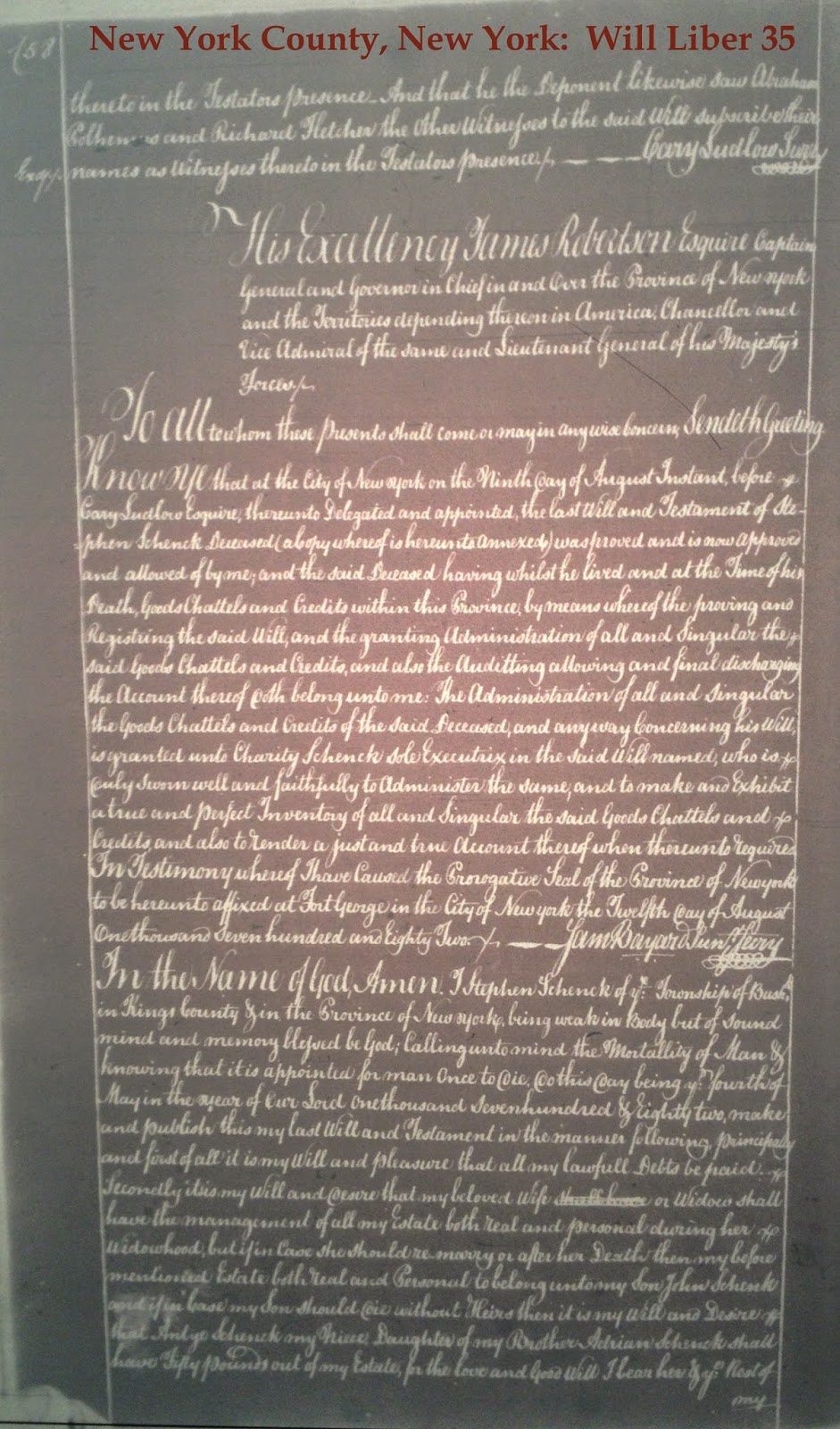 Email ThisBlogThis!Share to TwitterShare to FacebookShare to Pinterest
Labels: Duryea, transcription, will