His Excellency James Roberston Esquire Captain General and Governor in Chief in and over the Province of New York and the Territories depending thereon in America, Chancellor, and Vice Admiral of the same, and Lieutenant General of his Majestys Forces.

To All to whom these Presents shall come or may in any wise concern.  Sendeth Greeting.

Know ye that at Queens County on the Twenty Eight day of July last past before Samuel Clowes Esquire thereunto Delegated and appointed, the last Will and Testament of Cornell Smith, Deceased, (a Copy whereof is hereunto annexed), was proved and is now approved, and allowed of by me; and the said Deceased, having whilst he lived and at the time of his Death, Goods Chattels and Credits within this Province, by means whereof the proving and registring the said Will, and the granting Administration of all and singular the said Goods Chattels and Credits, and also the Auditting allowing and final discharging the Account thereof doth belong unto me; The administration of all and Singular the Goods Chattels and Credits of the said Deceased, and any way Concerning his will, is granted unto Marsey Smith, Uriah Bedel and Richard Matthews, the Executrix and Executors in the said Will Named who are duly sworn well and faithfully to Administer the same, and to make and Exhibit a true and perfect Inventory of all and Singular the said Goods Chattels and Credits, and also to Render a Just and true account thereof when thereunto Required.  In Testimony whereof I have Caused the Prorogative Seal of the Province of New York to be hereunto affixed at Fort George in the City of New York the First day of August One thousand seven hundred and Eighty one. --- Jam Bayard Jun

Know all men by these presents that I, Cornel Smith, of the Township of Hempstead in Queens County and Province of New York, Yeoman, being this twenty Eight day of May in the year of Our Lord one thousand seven hundred and Eighty One, weak in Body but of sound mind and memory for which I bless Almighty God, and not knowing how soon it may please the Lord to take me away by Death thefore I do make and Ordain this present writing and no other to be my last Will and Testament as followeth.

First I do Recomend my Soul to God who gave it and my Body I Committ to the Earth to be Buried with a Desient Burial at the Discretion of my Executors herein after named, and as touching my worldly Estate wherewith it hath pleased the Lord to bless me with.  I will devise and dispose of in the following manner.

Item.  I will and bequeath unto my loveing and well beloved Wife, Mercy Smith, my best feather Bed and furniture, two Cows and Calves, two horses and Farming Utensils, ten sheep and Thirty pounds in Money all at her Own disposall in Lue of her Right of Dower; and my Will is and I do Order and direct that my said Wife shall have the use of all my household Goods and four Cows, and the use and profits of my Dwelling house and Land that is to say, all the Land belonging to my homstead that Derived unto me from my Deceased Father, and also the Lott of Salt meadow and upland that I Bought of Abijah Bedel so long as she shall remain my Widdow towards the Education and bringing up of my Children, untill my younger Sons shall be twenty one years of age.

Item.  I will and Bequeath unto my Daughter, Susannah Smith, one Feather Bed, Beding, and appurtenances thereunto belonging to her own disposall.

Item.  I will and bequeath unto my Son, Amos, my Gun and Cuttash and the sword that was my Son Elijah’s.  I give unto my Son John to their Disposall.

Item.  My will is and I do order and Direct my Executors to sell all the Remainder of my moveable Estate not above disposed of, and the Money arising therefrom to be disposed of in the following manner.

First the above said sum of Thirty pounds to my said Wife as aforesaid and to my said Daughter Susannah the sum of sixty pounds in money to be at her own disposall, and my will is and I do order that all my Just Debts together with my funirall Charges be fully paid out of the money arising from my moveable Estate as aforesaid.  It is to be understood that my Negro Slaves is to be sold as my moveable Estate.

Item.  I will and bequest unto my Son, Jacob Smith, all the Remainder of the Farm and Land that I Bought of Nehomiah Sammis only Excepting the south part that I have already Conveyed unto my Son, Cornell Smith Juner, and to the Remain unto the said Jacob Smith and to his Heirs and assigns for ever.

Item.  I will and bequeath unto my two youngest sons, namely John Smith and David Smith, my Homestead whereon I now live and appurtenances, that is to say, my Dwelling House and Land near and adjoining that Derived unto me from my Father, Jonathan Smith, Deceased, which my Wife is to have the use of as aforesaid together with my Salt of Salt meadow and upland sittuate on Coes Neck that I bought of Abijah Bedel and a small Hay House on said neck to be Removed thereon, and also five acres of wood land, part of the land that I purchased of Samuel Clowes and James Wood, adjoining to the west side of the path that leads to Samuel Motts mill, all which I do give unto my said Sons, John Smith and David Smith, to be Divided Equill between them and Remain unto them and to Each of their Heirs and assigns for ever.  But my Will is that if either of them should Dye before theay shall arive to be twenty one years of age not then having Lawfull Issue that the Deceased sons part shall Remain unto the survivor of them and to his Heirs and assigns forever, but in Case both of my last named Sons should dye under the age of twenty one years not then having Lawful Issue, that then all the Land and meadow that is herein given unto them shall be equilly Divided amongst my surviving Sons and amongst their Heirs and assigns for ever.

Item.  I will and bequeath unto my Sons, Cornell Smith, Jacob Smith, and Amos Smith, my lott of Salt meadow and upland lying on Coes Neck that I purchased of Elijha Bedel, excepting a Small House thereon, to be equally Divided amongst to them shear and shear alike, and Remain unto them in severalty, and to their Heirs and assigns for ever, but if either of them should Dye under the age of twenty one years, not then haveing Lawfull Issue, that then the Deceased Sons part shall be Equilly Divided between the survivors of them and between their Heirs and assigns for ever.

Item.  I will and bequeath unto my Sons, Cornell Smith and Amos Smith, all the Remainder of the wood Land not above disposed of that I bought of Samuel Clowes and James Wood as aforesaid, equilly to be Divided between them and Between their Heirs and assigns forever and my will is that if my said Daughter, Susannah, should dye before she shall come to be Eighteen years of Age or Day of marridge, that then the said sixty pounds in money given unto her shall be divided between my said wife and my Daughter, Mary Rainer, to their own Disposall, and whereas I have given to my wife the sum of Thirty pounds and money as is above mentioned, thereofore my will is that she shall have the Sum of Thirty pounds more in Money out of my Moveable Estate and to be at her Own Disposall, and further my Will is that all the Remainder of my moveable Estate not above disposed of shall be Divided Equill amongst my said wife and my two Daughters, Mary Rainer and Susannah Smith, shear and shear alike and to their own Disposall.

Lastly, I do hereby ordain, Constitute, and appoint my loveing Wife, Mercy Smith, and my trusty Friends, Uriah Bedel and Richard Mathews, both of the Township of Hempstead, to be the Executors of this, my last Will and Testament, giveing them or the Survivors or Survivor of them full power and authority to Execute the same and every Article herein Contained.

In Witness hereunto the said Cornel Smith hath sett to his hand and fixed his Seal the year and Day above written.  --- Cornel Smith X his mark

Signed, Sealed, pronounced, and Declared by the said Cornel Smith to be his last Will and Testament in the presence of us who submitted to the same as Witnesses in his presence and in the presence of Each other.
Hannah Whaley X her mark
Moses Cornelius
Richard Ellison


Be it Remembered that on the Twenty Eight Day of July One thousand and seven hundred and Eighty One, personally came and appeared before me Samuel Clowes, Surrogate of the said County, Richard Ellison of Hempstead in said County, yeoman, and being duly affirmed, Declared that he did see Cornell Smith Sign and Seal the within Written Instrument, purporting to be the Will of the said Cornell Smith, bearing date the Twenty Eight Day of May one thousand seven hundred and Eighty One, and heard him publish and Declare the same as and for his last Will and Testament; That at the time thereof he the said Cornell Smith was of sound Disposing mind and memory, to the best of the Knowledge and Belief of this Deponent; and that his name subscribed to the said Will is of his own proper hand Writing which he subscribed as a Wittness to the said Will in the Testators Presence.  And that he, this affirmanant, did see Hannah Whaley make her mark, and Moses Cornelius the other wittnesses to the said Will subscribe their names as wittnesses thereto in the Testators Presence.  --- S Clowes Surrogate 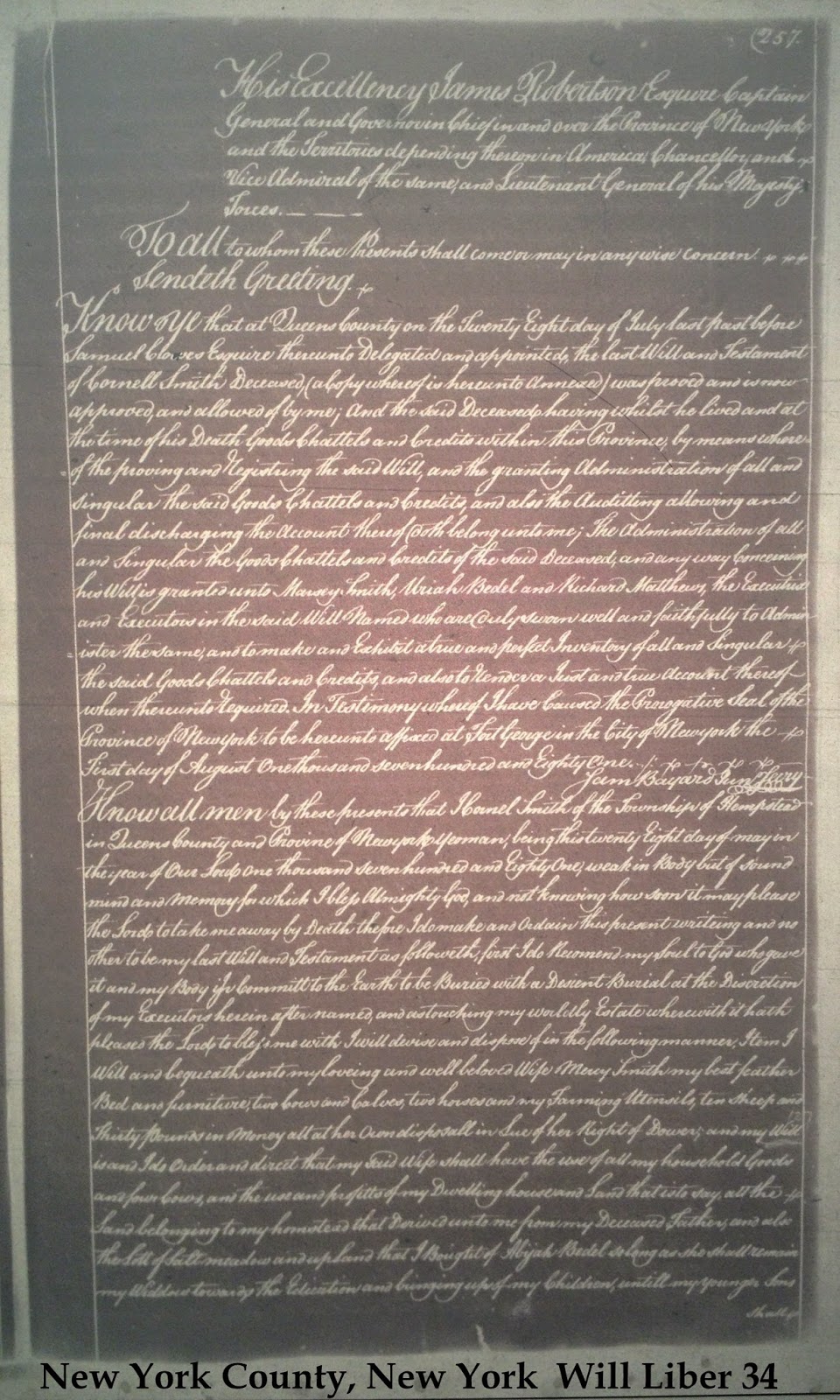 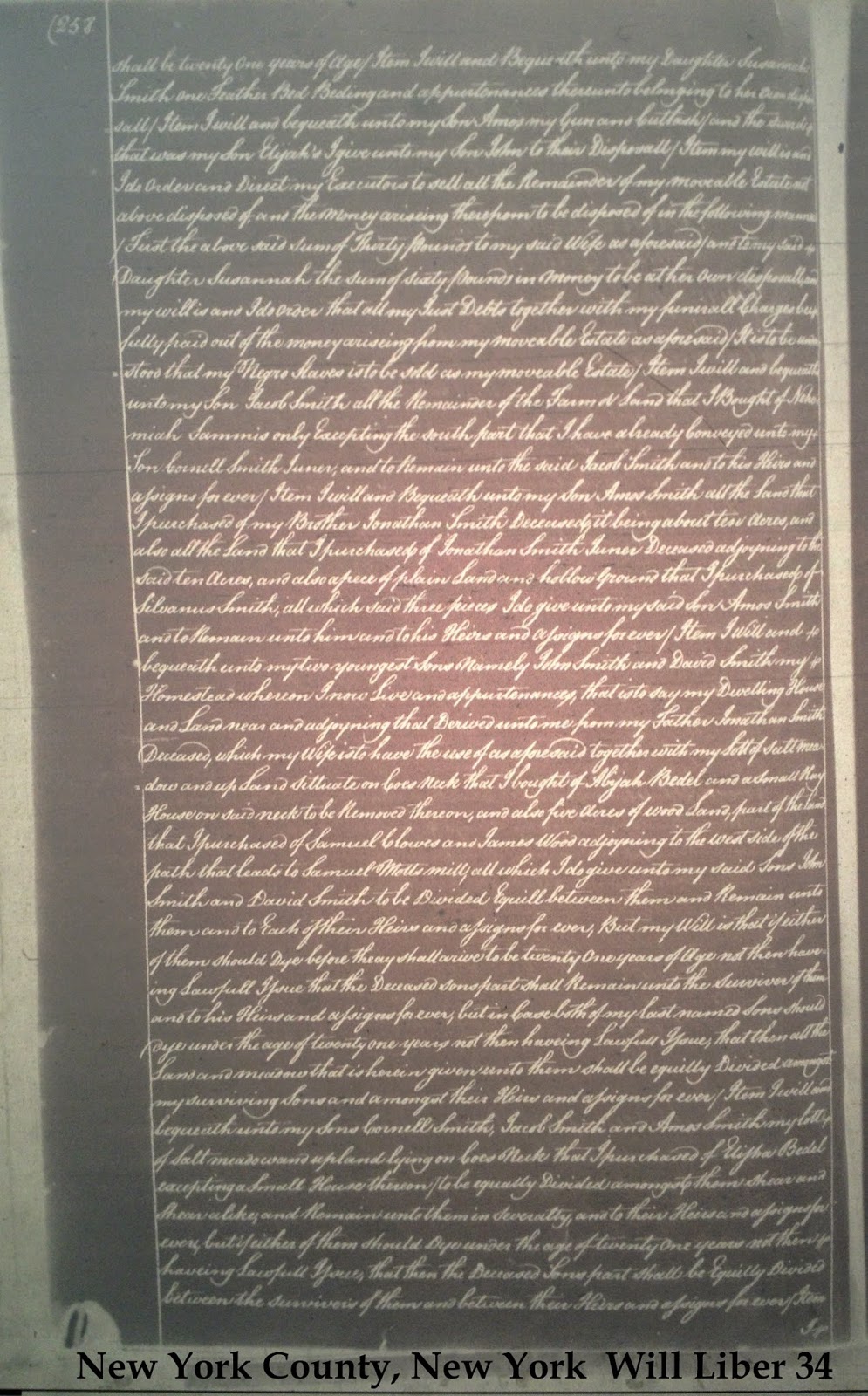 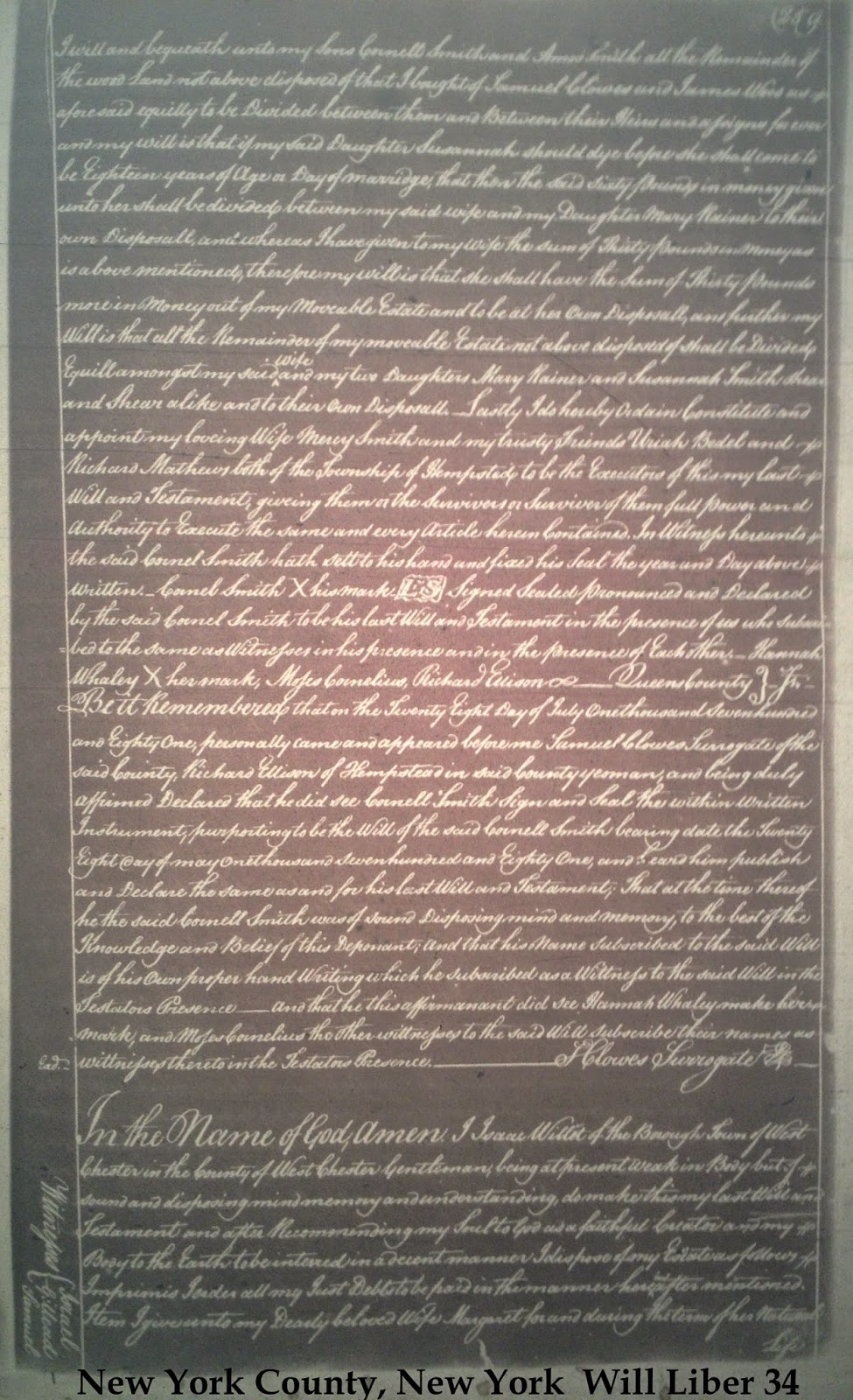 Email ThisBlogThis!Share to TwitterShare to FacebookShare to Pinterest
Labels: transcription, will