After reinstating its health interpretations of DNA and doubling the price, 23andMe announced changes to its genealogy offerings.  The screen shot below may be difficult to read, so here it is:

"As of November 11th [2015], some aspects of DNA Relatives have been modified in preparation for the transition to the new 23andMe experience.  Pending introductions have been canceled, and anonymous participants may no longer receive introductions or messages in DNA Relatives.  If you are anonymous you can message any Public Match, but this message will include your profile name."

DNA helps genealogy pursuits by comparing your DNA against other people who also submit DNA.  You will share tiny fragments of your DNA with other people, your "DNA cousins," handed down through the generations from an ancestor in common.

The problem with these genetic genealogy databases is that most people do not respond to inquiries.  Of the few who do answer, most lack an understanding of the meaning of the DNA test and are unable to participate in an analysis to figure out where the common ancestral lines may be.  Few people have a comprehensive family tree going back many generations on every line, which is prohibitive when the common ancestors are predicted to have lived in the 1700s.  This scenario is not unique to 23andMe.  I experience it daily at FamilyTreeDNA and AncestryDNA as well.

The problem of unresponsive, anonymous DNA donors was perhaps more noticeable at 23andMe because its main competitor, FamilyTreeDNA, required a visible name or username of its participants.  (AncestryDNA more recently joined the autosomal DNA pool, but it too is plagued with people using pseudonyms instead of names and a high non-response rate.)

Most of my tested family members have at least 2,000 DNA Relatives listed at 23andMe.  This list of matches is not exhaustive, but is dominated by anonymous cousins who ignore requests to exchange genealogical information. 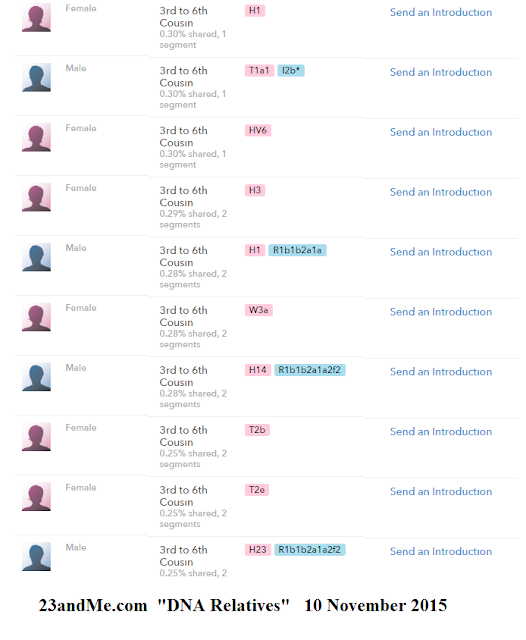 [On a related note:  The letters and numbers in pink and blue are maternal and paternal haplogroup predictions.  They have nothing to do with figuring out how distant cousins connect.  If 23andMe could add these to the list of things to disappear, that would be great.]

This list shows distant cousins who have submitted their DNA to 23andMe, clicked the box to participate in the genealogy section of the website, yet never chose to reveal any genealogy information or take any further genealogy steps.  They bump out other matches who may be willing to work on genealogy, as the site limits the number of matches a person can see.

There are lots of reasons why someone (actually tens of thousands of people) may do this.  But the system at 23andMe needs to stop supporting this.  Send anonymous matches notice of their inactive status.  If they do not respond, then boot them out of the genealogy section so that genealogy-minded testers have room to appear.

The change I see today is that the anonymous matches are still present, but the ability to "send an introduction" has disappeared. 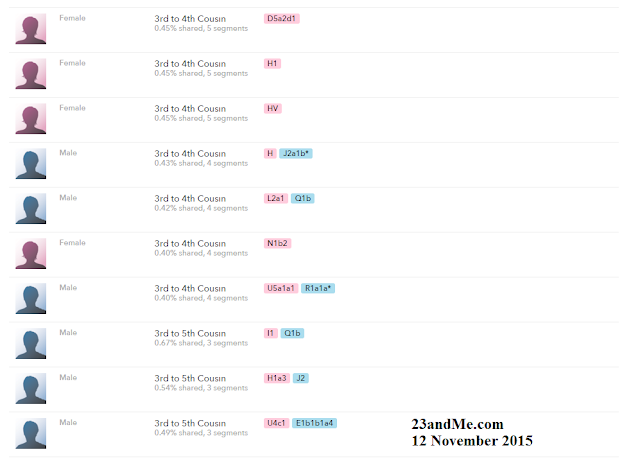 This could be the prelude to ousting these anonymous matches entirely.

The downside to anonymous matches vanishing is that you will not know if a very close anonymous match is in the system.  All of my profiles have matches in the second cousin range who are anonymous and have not responded to messages within 23andMe's mail system.  Now, with no ability to reach out to these people, we may never connect, which is a shame, because they already tested their DNA and could greatly help uncover more of the family's story.