Locations of My DNA Family at 23andMe 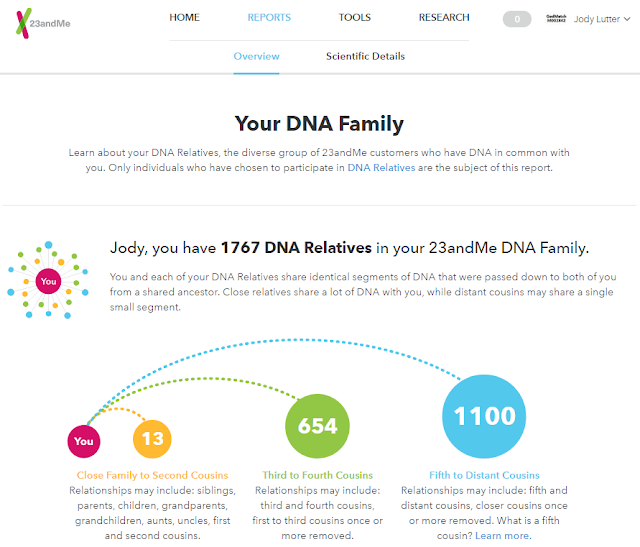 Part of this feature displays the locations of the people who share your DNA.

This is a different concept from "ethnicity."  The three major testing companies offer ethnicity estimates with different labels.

My Heritage is attempting to join the genetic genealogy market.  It offers Ethnicity Estimate (beta).

Ethinic estimates will differ from company to company and over time because the reference populations will change based on new information and increased people who test.  For the latest take on my ancestors, see my post about Living DNA's interpretation of me.


Based on my exchanges with DNA matches at 23andMe, they live across the globe, but mainly in the United States.  The other countries I see most often are Canada, Ireland, Australia, New Zealand, Germany, France, and Hungary. 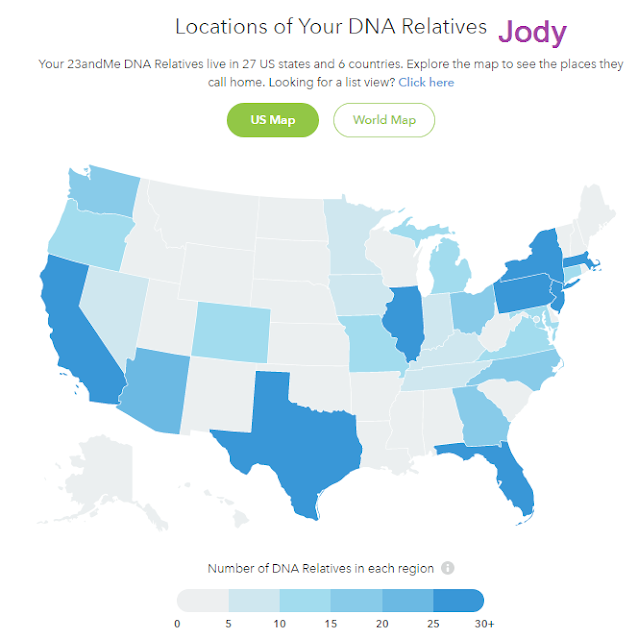 I was not surprised to see that a lot of my DNA relatives live in New Jersey, New York, and Pennsylvania because this area is where my ancestors settled after leaving Europe.  Florida and California are popular destinations for New Jersey natives to relocate.


Next I compared my United States map to my parents.  My father has more relations spread across the United States, while my mother does not. 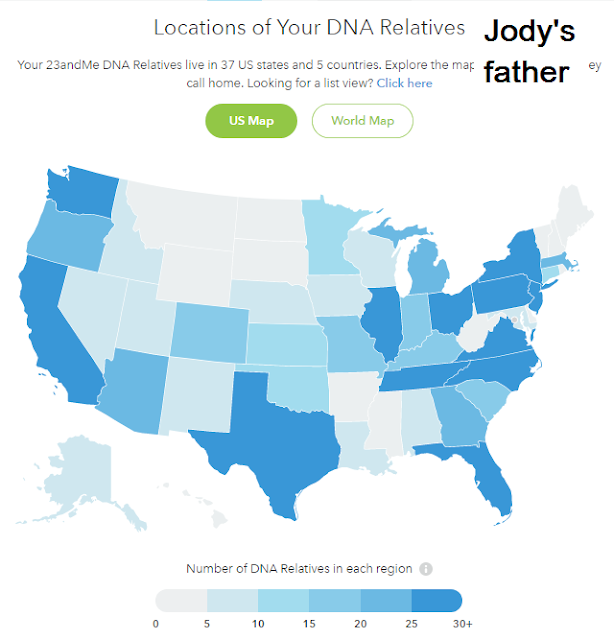 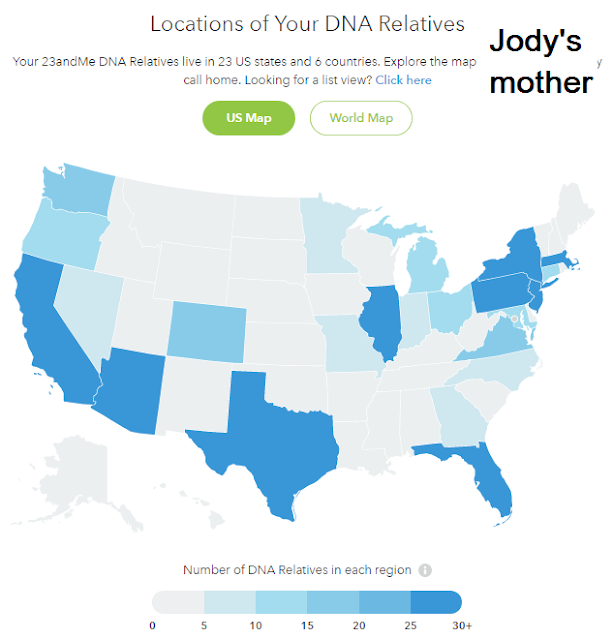 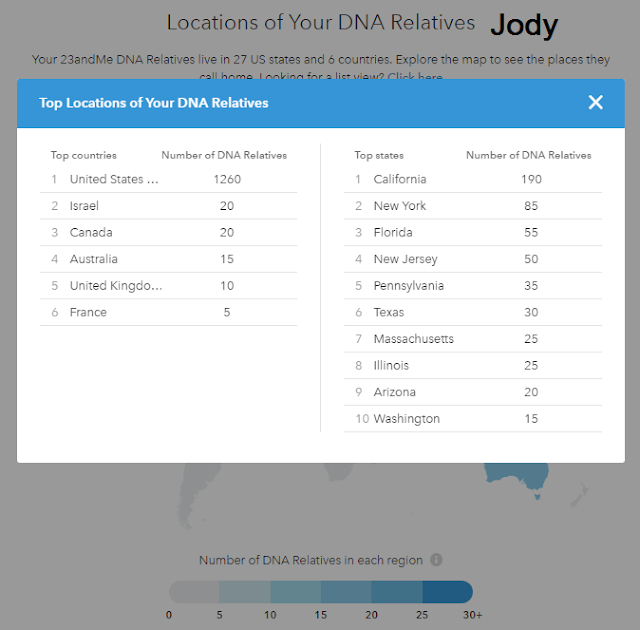 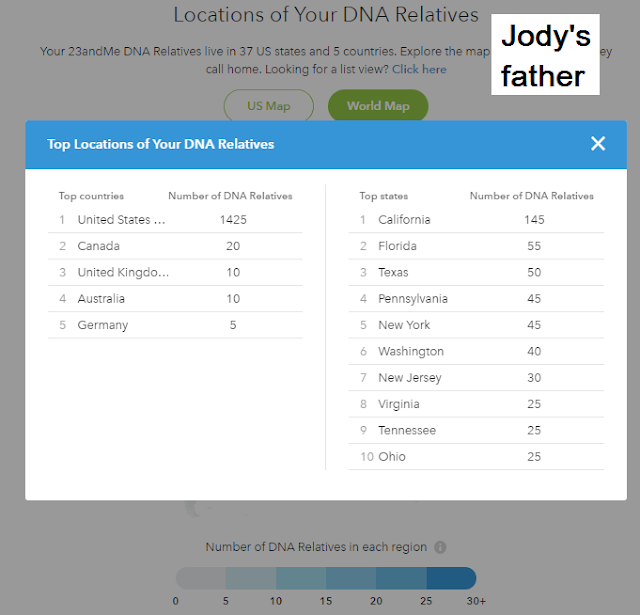 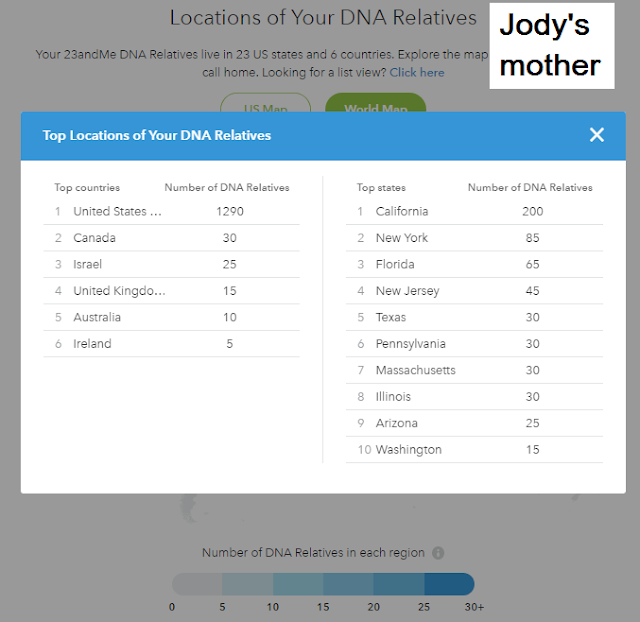 I'm not sure where 23andMe is getting the numbers.  A tester answers (or doesn't) questions about themselves, including their current residence.  With the worldwide totals, hundreds of my DNA relatives are unnacounted for.  Maybe people did not answer this question and are not tallied in this breakdown.

Another important factor is that 23andMe (and direct-to-consumer DNA testing) is not available in every country in the world.  According to its website, 23andMe ships to over fifty countries; health reports are not available in most of them.  So if your DNA relatives live in a country that 23andMe cannot ship to, or does not offer the health information interpretation, you have diminished chances of finding these relatives in your matches.

If 23andMe wanted to be more useful for genealogy, it would bring back the profile pages of participants and allow searching and sharing of genomes with people not on your list of matches, currently called "DNA Relatives."