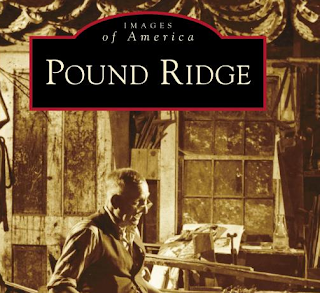 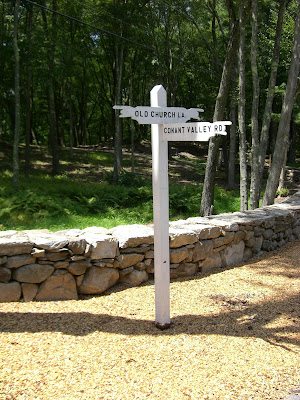 Following up on my excursion to Pound Ridge, New York, I ordered the book, “Images of America, Pound Ridge” by Richard Major and Vincent Manna.  Two items in the book are of particular help for clarifying my findings from my summer trip to Pound Ridge.
A map from 1906 was reprinted from “God’s Country” by Jay Harris, showing a plot owned by Mrs. Eyre.  Relaxing on my couch, instead of navigating the almost dirt roads straddling the New York and Connecticut border, I was able to study this map and the modern-day map of Pound Ridge and figure out where the property is.  I think I was in the correct place.  It appears that Conant Valley Road is either a newly made road or was just not codified on early maps.  That is what was throwing me off.  I was mistaking Conant Valley Road for the nearest cross street, when actually Eastwoods Road was the cross street, at least back around 1900.
The second useful item was an explanation of Southwestern Farms.  Mrs. Eyre sold the property to this entity in 1910.  According to Images of America, Southwestern Farms was owned by Artemus Ward for expansion of the reservoir, and “most of the land is underwater . . . .”  I don’t think that the area owned by Mrs. Eyre is underwater.  There are small ponds on the property, but it’s not underwater.  I find little online about this man and his Southwestern Farms, so I am glad to have found the explanation in this book.