In researching John Frazee's death, I come across a little discrepancy.  His obituary appeared in the New York Times on 5 March 1852.  His wife sued to collect moneys owed to him for his designs, as detailed in this post, and a date of death of 26 February 1852 was given in the case, Lydia Frazee v. United States.  Some of his papers, now available online through the Smithsonian, provide a beautiful and unusual record of death and burial at Greenwood Cemetery in Brooklyn.  (I don't know who drew the picture.  Obviously not John Frazee himself.) The burial records for Green-wood Cemetery are online.  A search for John Frazee turns up some family members in the plot given in the drawing, 19577.  According to this online index, John Frazee was not buried here until 1870. 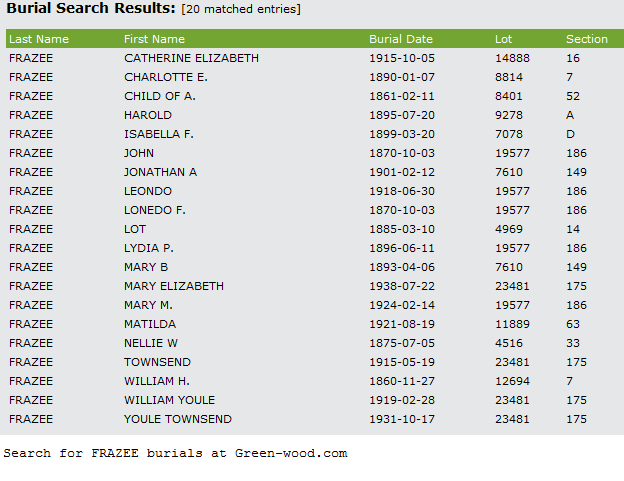 I found a picture of the grave at findagrave.com.  Always check here for graves, even if your person of interest was not famous.  I expected to find John Frazee at findagrave because he is a little famous, though not as famous as the buildings he designed.
So now more questions:  is the John Frazee buried at Green-wood Cemetery in 1870 the same John Frazee who died in 1852?  If so, where was John originally buried, and why was he moved?  More researching needed.
Posted by Jody Lutter at 4:48 PM