War of 1812 Pension Application for a Widow

Fold3 is making available for free digitized pension claims for the War of 1812.  The digitization project is proceeding in alphabetical order and Cook files for New Jersey have recently become available.

My 3x great grandmother, Elizabeth Vanderhoof, applied for a widow's pension for service of her deceased husband, Stephen H Cook.  For quite some time, I have been holding out for this file after locating an index card.


Elizabeth Vanderhoof was born in 1799 and died in 1878, according to her gravestone.  I do not know her parents.  As you can see from the marriage record below, her parents are not listed.  I cannot find a record of her death with any parentage.  She might be characterized as a "brick wall," meaning that I cannot get to the generation behind her.

Elizabeth is more like a glass wall than a brick wall.  She likely comes from one of the nearby Vanderhoof families.

Stephen Cook was born in 1797 and died in 1853, according to his gravestone, making him just old enough to have participated in the War of 1812.  He and Elizabeth were married in 1819 and was recorded at the county level.

A nod to the DNA studies:  The first couple at the top of the page of marriages, Peter Vandroof and Rachel Peer, are ancestors of a man who shares a segment of DNA with my third cousin from the Stephen Cook/Elizabeth Vanderhoof line.  Could the common ancestor be a Vanderhoof?


In order to claim a pension as a widow of a veteran, the marriage must be proved.  I was hoping that the pension application would provide me with Elizabeth's family of origin.  No such luck.  Elizabeth claimed to be unable to provide documentation of her marriage to Stephen Cook.

Elizabeth applied for a widow's pension under an 1871 act that entitled a widow to a pension if married to the soldier before the end of the War in 1815.  Note that Elizabeth wrote the day and month of her marriage but not the year.  Had she written the actual year of marriage, 1819, and included proof, her pension would have been denied.  She was denied anyway.

The 1878 Act, however, entitled Elizabeth to a widow's pension.  She died on May 4, just two months after the passage of this Act.  Viewing the actual application shows us that she filed under the 1871 Act and not the 1878 Act as I originally speculated.  See the The Legal Genealogist's article for a concise summary of entitlements for pensions for the War of 1812.

Elizabeth attempted to bootstrap her application for a widow's pension by mentioning the Land Warrant.  Her reliance upon this bounty is misplaced.  (You can search and view land patents for free at the non-genealogy site of the United States Bureau of Land Management.)  Under the 1850 Scrip Warrant Act, Stephen Cook was granted 40 acres in Wisconsin for his service in the War of 1812.  Stephen was alive at this time, so when he married Elizabeth is not relevant for receiving the land bounty.  The number of acres, forty, tells us that Stephen was able to prove at least one month of service, but not more than four months.


The only possible Vanderhoof family tie I can garner from Elizabeth's pension application is in her selection of witnesses to her signature:  Chilion Cook and Charlotte Cook. 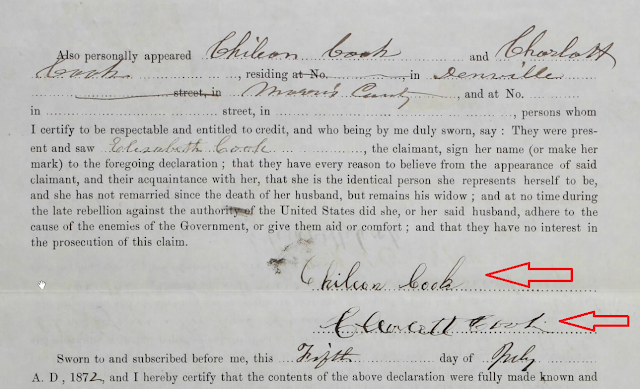 Charlotte died in 1886.  Her death certificate lists parents as Jacob Vanderhoof and Ann.  We need more documentation to connect these two woman to the larger Vanderhoof family in Morris County, New Jersey, but I think we are on the right trail.