When I can't find discover someone's parents in my family tree, I call this a "tail."  Someone gave me this term to use instead of "brick wall."

A DNA connection turned up at 23andMe with Imlay of Monmouth County, New Jersey in his family.  I needed more on my Imlay line because mine stopped in the 1800s.  I need to travel back into the 1700s to make the DNA connection.

Ellen (or Eleanor) Euphamy Imlay was the Imlay tail.  She was one of my 4X great grandmothers.  She was married to William Walling (1804-1870) and lived her life in Monmouth County, New Jersey.  She died in 1895 in Keyport/Raritan Township in Monmouth County at age 87.  Her parents were listed as Elisha Imlay and Ellen Imlay. 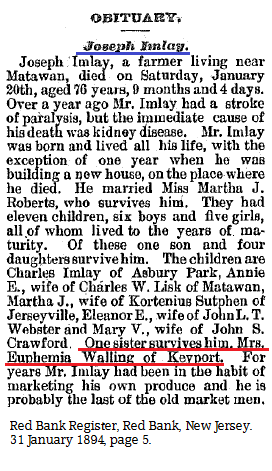 FamilySearch has many (free) New Jersey resources, such as marriages recorded at the county level.  There is a marriage in Monmouth County for Elisha Imlay to Eleanor Taylor, 25 April 1802.  They fit as parents of Ellen and Joseph Imlay. 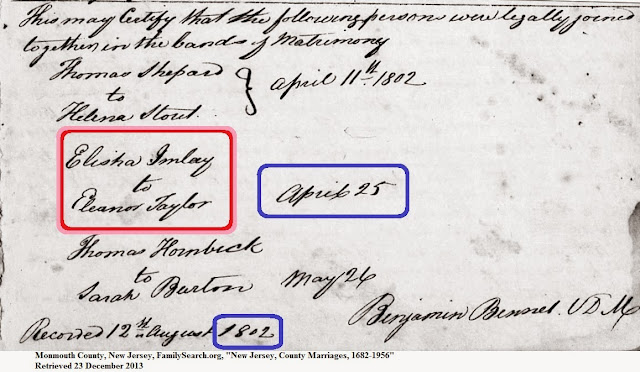 Of special interest was a blurb about two wills:
---George Taylor Senior, probated in 1835, mentioning that the children of his daughter, Eleanor Embly, would receive her share.

Although this transcription of a transcription seemed to have the information to help me trace back two more Taylor generations, I could not rely on it as a source.  I could use it to get closer to the original source- the wills.  Again, FamilySearch makes available (for free) New Jersey surrogate records (except Morris County).  The wills (actually first transcriptions of the wills) and related court documents contain far more information and names than the book summaries, which is another reason to always get as close to the original record as possible.


George Taylor named a daughter, Eleanor Embly, in his will, but left her share of his estate to her children, who are not named.  Embly could be Imlay, but I need more to make a firmer connection.  This pattern of inheritance suggests that Eleanor Embly/Imlay was dead at the time the will was written.  Fortunately for research purposes 180 years later, George Taylor had many more children and he named them in his will.  This makes James G Taylor, whose will was probated one year later, likely to be a son of George Taylor.


The will of James G. Taylor was probated in Monmouth County in 1836, one year after George Taylor Senior's will.  James' siblings are the children of George Taylor in the previous will.  Eleanor Embly became Elenor Imley, which is closer to Imlay.  But more importantly, her children were named, and they match what I already traced, that Eleanor's son was Joseph Imlay and her daughter was Eleanor Euphamy, who married William Walling.

So I now have parents for Eleanor Euphamy Imlay:  John Elisha Imlay and Eleanor Taylor.  TAYLOR is a new ancestral surname for me!

And I have to get back to John Elisha Imlay, for he is my new Imlay tail.