Some people have written to me, asking how you know to look for someone twice in the same census year.  The short answer is that you don't know, so don't stop with one census entry.  The longer answer is that you need to look for hints or situations that may have given rise to getting counted twice.  In my prior post on double enumerations, my hint was the Adelia Joyce's occupation was "out at service" in her listing at her father's home in 1880.  I looked for her again and found her also listed at the home of her employer.

In this post and in upcoming posts I will feature some more double enumerations in the census and explain the hints pointing to a double count and the ramifications to that family's history.

We'll look at the Bossert family of Newark, Essex County, New Jersey in the year 1900.  Newark was a major city then, as it is now, and its city directories survive. Years ago, I sat in the Newark Public Library to view the directories on microfilm, but you can view them (up to 1923) from home at Fold3.  The city directories provide a year-to-year snapshot of a family, where they moved, their occupations, when women were widowed, and much more.  I am quite fortunate that so many of my lines lived in major cities, appearing in city directories for almost two centuries.


We have two men (or do we?) with the same name, Peter Bossert, living in the same neighborhood in the 1900 city directory.  No other information is available, such as their age or spouse.  In 1900, I know of two living men bearing this name:  Peter Bossert, born about 1845, and his son Peter, born about 1880.  An unmarried twenty year old would likely not have his own entry in the city directory.  So are these the same person?  Broome and Prince Streets run parallel to each other, one block apart.  The Broome Street residence is about three blocks south of the Prince street address. 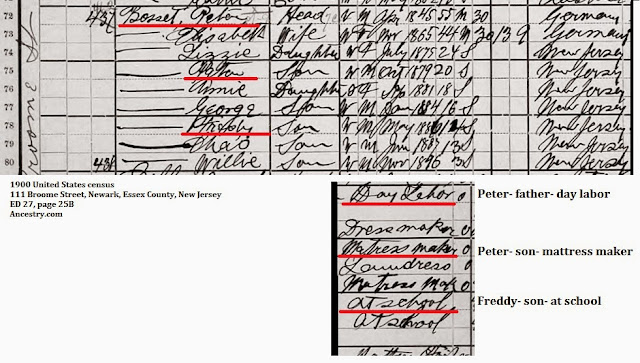 Above is the census entry at 111 Broome Street for the entire family: Peter Bossert, father; Elisabeth [Beck], mother; and seven children.  Peter is 55 years old, working in "day labor."  Peter, the son, is 20, a mattress maker.  Son Freddy is 14 years old and "at school."

Above is the census entry for a few blocks away at 17 Prince Street.  Peter Bossett (not Bossert) is 51 years old, a "fireman stationary."  Only one person is listed with him:  a son, Frederick, age 14, "at school."

I would say that these are the same people, counted twice in the same census year, blocks apart.  I don't know why Peter was counted separate from his family and just with one son.  (The family did shift the spelling of their name from Bossert to Bosset and then Bossett.)  Both of these residences are rentals.  It is possible that the family was in the process of moving when the census was taken.  As a fireman, Peter may have slept apart from the family when on duty; perhaps son Frederick was training with him at this point in time.  In the few birth certificates that I have found for Peter's numerous children, Peter's occupation and address change often.  This double enumeration, in both the city directory and the census, could reflect Peter's multiple occupations and constant relocation.  Fortunately for research purposes, he stayed in the same neighborhood in Newark every time.