One of the alluring features of Ancestry's DNA testing is the Shared Ancestor Hints derived from family tree comparisons.  (The other feature is finding missing close relatives.)  My test produced over 15,000 matches.  (Can that be?  306 pages of 50 matches per page.)

With my test attached to my mother's tree, only one DNA cousin produced a shared ancestor hint.  This is my mother's second cousin in the Preston/Sheehey branch.  We had already made contact before the tests results were in.

Attaching my father's tree to my test profile produced five people with shared ancestor hints.  (When my father's results are ready, these five people should also match him.  If not, then the shared DNA likely is from my mother and these family tree hints are misleading.)  One of the DNA cousins has a private tree, so I could not review the hint.

Of the remaining four shared ancestor hints, two were for the same set of 5th great grandparents:  Jacob vander Hoof (1772-1847) and Ann Hopler (1772-1841) of Morris County, New Jersey.  These folks are buried in the deMouth Family Burial Ground in Boonton.  I have also met other descendants in my DNA travels.  Based on our family trees, one DNA match is a fourth cousin, twice removed and the other is a sixth cousin. 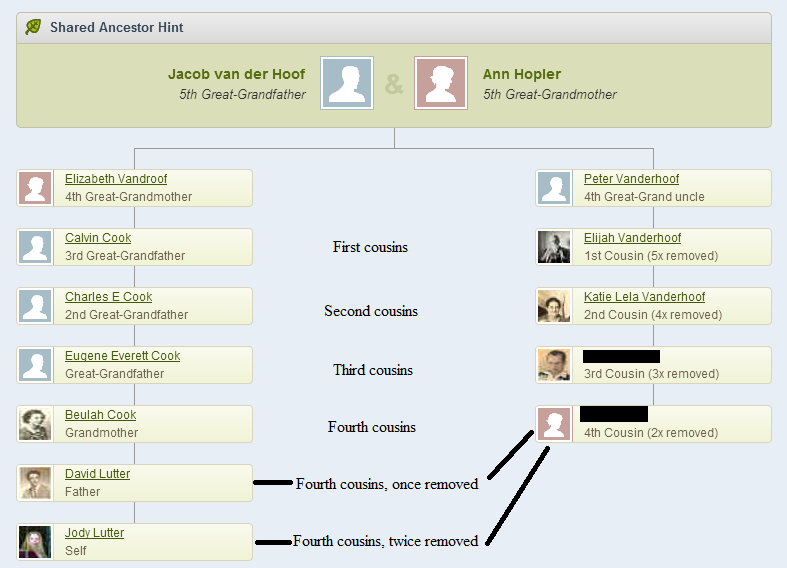 The other two matches are from the New York Hyser branch of my tree.


Although on paper I am a cousin to these matches, the shared DNA could easily come from another ancestral line that is not documented in at least one of our family trees.  That is how I have over 15,000 matches but only 6 matching family trees.  Someone has not documented back far enough, or someone has a non-parental event.  I could have easily found any of these DNA matches by comparing trees- no DNA testing required.

When my father's results are available, I expect him to have far fewer matches.  I am trying to use the AncestryDNA Chrome Extension to reveal which segments of DNA are shared by the matches in order to triangulate.  AncestryDNA provides no chromosome browser function to do this directly, unlike 23andMe and FamilyTreeDNA.  The high number of my matches is causing the Chrome Extension to freeze.