In December I tested my mitochondrial DNA ("mtDNA") with FamilyTreeDNA.  My first mtDNA test was over five years ago with Ancestry.com and is now essentially defunct.

Well, I have four matches to work with. 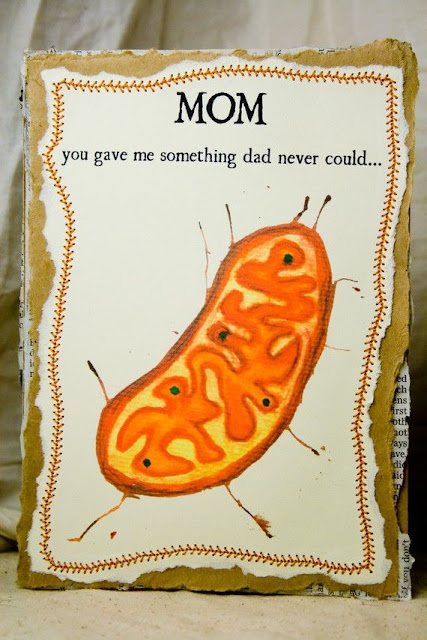 My direct maternal line is not long on paper.  I can trace back to my great great grandmother, Bridget Sheehy.  She was born in Ireland about1857.  She married John Preston (1857-1928) around 1877 in Dutchess County, New York.  The mitochondria in my cells are identical to the mitochondria that powered Bridget's cells.

Bridget died almost one hundred years ago on 5 April 1916 in Bayonne, Hudson County, New Jersey and is buried at Holy Name Cemetery in Jersey City.  Her death certificate listed the names of both of her parents, Edmond [or Edward?] Sheehy and Bridget Frawley. 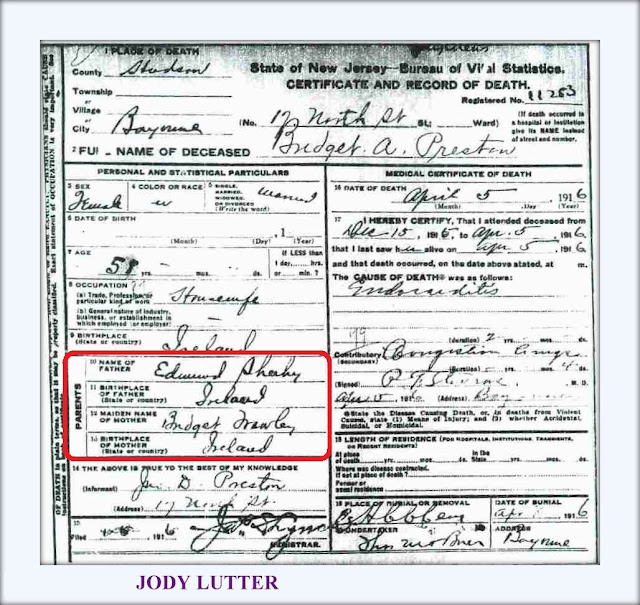 There was a couple by this name living in Dutchess County, Edmond Sheehy (1825-1893) and Bridget Frawley (1826-1905).  Bridget's death certificate lists her parents as John Frawley and Mary Shea of Ireland.  I lucked out again.  The death certificate for every ancestor on my direct maternal line includes the full names of both parents up through this possible fourth great grandmother.

A wonderful clue was in a newspaper article from 1936 in The Harlem Valley Times from Amenia, Dutchess County.  [Free access through FultonHistory.com.]  The article detailed the 50th wedding anniversary of a couple, Thomas Culligan (1863-1937) and Ellen Sheehy (1866-1938).  Ellen's parents were "Edward" Sheehy and Bridget Frawley of Limerick, Ireland.

Was Ellen a sister of my Bridget? 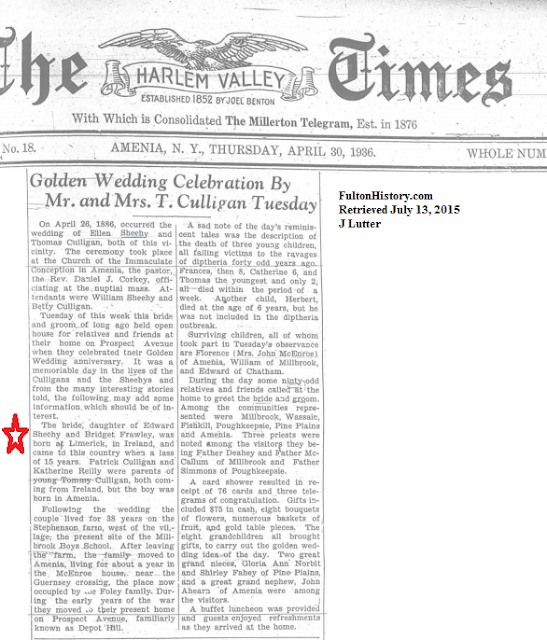 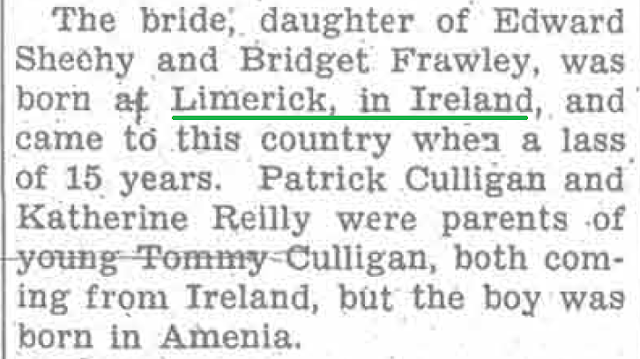 I want to assign my Bridget Sheehy to this family from Amenia.  But there is no connection in any of the documents I found so far.  In the anniversary article above, no relatives named Preston or from Bayonne are mentioned.  The only child mentioned in the 1905 obituary of Bridget Frawley Sheehy, possible mother of my Bridget, is her daughter from the newspaper article, Ellen Sheehy Culligan. 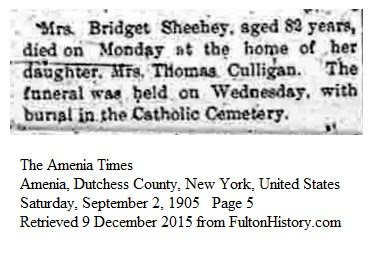 My Bridget's first definite appearance is in the 1880 federal census in Stanford, Dutchess County, when she is already married to John D Preston and has children.  But in the 1875 New York state census is a Bridget Shehea, age 22, born in Ireland, a servant to the Bertine family in Amenia.  The next family is James Shea of Ireland, his wife, Catherine [Ahearn], and their children, Thomas, Nora, Catherine, and Margaret.

The seven year old Thomas Shea in the 1875 census is Thomas James Shehea (1867-1885) at FindAGrave and linked to parents James T Sheely (1828-1902) and Catherine Ahern (1838-1925).  This tells me that the surname underwent spelling modifications.  This family, as well as the Sheehy and Culligan families, are buried at Immaculate Conception Cemetery in Amenia, Dutchess County, New York.  Is my Bridget related to James Shehea/Sheely/Sheehy? 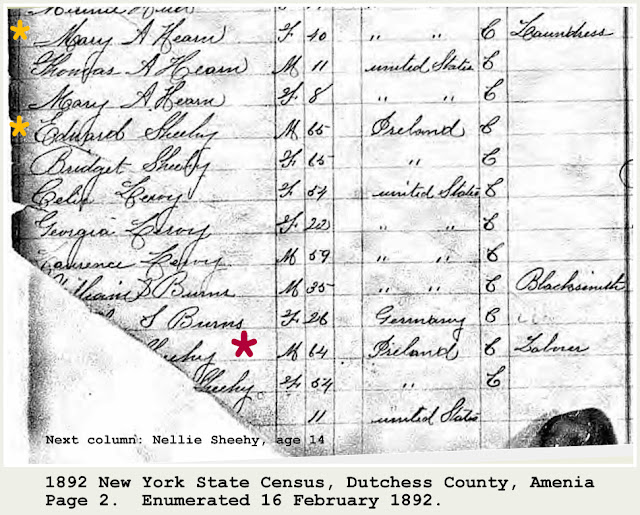 Consider the 1892 New York State Census.  "Edward" Sheehy and Bridget Sheehy are enumerated in Amenia.  The prior family is Mary Ahearn, age 40; she is a daughter of Edmond/Edward Sheehy and Bridget.  At the bottom of the page is a Sheehy family, unfortunately cut-off.  The male head of household is 64 years old, just one year shy of Edward Sheehy.  Could this be James Sheely/Sheehy and his wife, Catherine Ahearn?  The eleven year old child is also unviewable, but the next page has Nellie Sheehy, age 14.  Nellie was a daughter of James Sheehy and Catherine.

Were Edmond/Edward Sheehy and James Shehea/Sheely/Sheehy brothers?  Or is James a relative of Mary Shea, the possible maternal grandmother of Bridget?  Or were the names of Bridget's parents wrong on the death certificate?

To utilize my mtDNA test, if Ellen Sheehy, wife of Thomas Culligan, was a sister of my Bridget, and we could possibly find a living direct maternal line descendant of Ellen, that person's mtDNA would be identical to mine.  Ellen had one daughter, Florence (1898-1979), who had children with John McEnroe (1923-2005).  If any of those children are still alive, they could test; otherwise, the eligible candidates would be children of Florence's daughter, Eileen McEnroe (1932-2011), wife of Guenther Hans Strauss (1927-1999).