I am trying to discover where in Ireland Patrick Joyce (1830-1905) and Margaret Campbell (1835-1870) were from.  They were my maternal grandmother's great grandparents.  Their first appearance in the United States was in the 1860 Federal Census in Patterson, Putnam County, New York.


We start with Patrick and Margaret themselves.  I do not know if they married in New York or Ireland.  I have found no church records for the Patterson, Putnam County area circa 1860 and no mention in a newspaper, which is not unusual.  Patrick's death certificate from 1905 in Pawling, Dutchess County, lists his birthplace as "Ireland" and names one parent, his father, Richard, of Ireland.  Margaret's death in 1870 was recorded on the federal census mortality schedule and in newspapers without mention of her town of origin or her parents.  Deaths were infrequently reported to the state at this time.

So next we turn to the records of their children.  My direct line is through Patrick and Margaret's daughter, Delia Joyce (1862-1929), who married Patrick ODonnell (1856-1931) in Bayonne, Hudson County, New Jersey in 1887.  I cannot find a record of this marriage filed with the states of New Jersey or New York.  Saint Mary's Church in Bayonne, New Jersey has a record of this marriage.  Delia's parents are listed without a place of birth.

Even if a marriage record surfaces for this couple in the New Jersey State Archives from 1887, the certificates in this time period asked for the country of birth of the parent, so the answer could be merely "Ireland."

Delia died in 1929 in Bayonne.  Her parents were listed as Patrick Joyce of Ireland and Cannot Learn of Ireland.  (Sixty years after Delia's mother's tragic death, her name had been forgotten.)

So next we turn to Delia's siblings, the other children of Patrick Joyce and Margaret Campbell.  There were three:
Mary, born about 1861, last seen in the 1870 census
John, born about 1867, married Mary Delaney
James, born about 1869, married Ellen [-]

After Margaret died in 1870, Patrick Joyce remarried to Bridget Cortney (1850-1910) and had several more children.

The problem with finding records for the siblings of Delia Joyce is that they are in New York.  For New Jersey records, I can go to the Archives in Trenton and retrieve the records myself and copy what I need.  For New York records, you need to place an order via postal mail and pay at least $22 (US Dollars) and then wait.

The more time that passed, the less likely Patrick Joyce's children and grandchildren would remember the ancestral Irish hometowns, if this information was even requested.

Obituaries for these siblings were not difficult to track down thanks to FultonHistory.com.  (This site is a free resource of digitized newspapers, mostly from New York.)  Still no Irish hometowns.

I ordered the marriage certificate for John Joyce (1867-1934) and Mary Delaney (1866-1941).  They were married in Pawling, Dutchess County, New York on October 28, 1888 by Reverend Daniel J McCormick of Saint John's Church.  Only the names of the parents were requested; not the birth place. 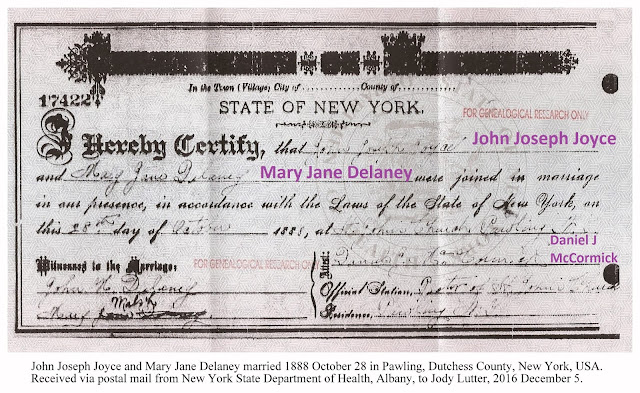 The witnesses were John Delaney and Mary Ann Walsh.  Delaney was likely for the bride.  I don't know who Mary Ann Walsh could be.  Maybe the lost older sister of John Joyce?  More research needed!  Always investigate the witnesses.


The records kept by Saint John's Church in Pawling may be a great help.  This family was also buried in the church cemetery.  If anyone has a way for me to look at these records, please reach out to me.  Thank you.