Family Tree DNA has reworked its Population Finder into a new service called MyOrigins.  Some people test their DNA in order to find out their ethnic makeup, so this would be a feature of interest to such people.  Please note that you need to take an autosomal DNA test (called Family Finder at FamilyTreeDNA) in order to obtain such results.

As you view ethnic origins, remember that the DNA you inherit from your ancestors is passed down to you in an unequal ratio- you carry more DNA of some ancestors to the detriment of others.  Plus, MyOrigins and any of the other available tools (such as 23andMe's Ancestry Composition) that estimate your ethnic makeup are based on the program's unique formula and estimates.

My father's results paint him as 100% European. 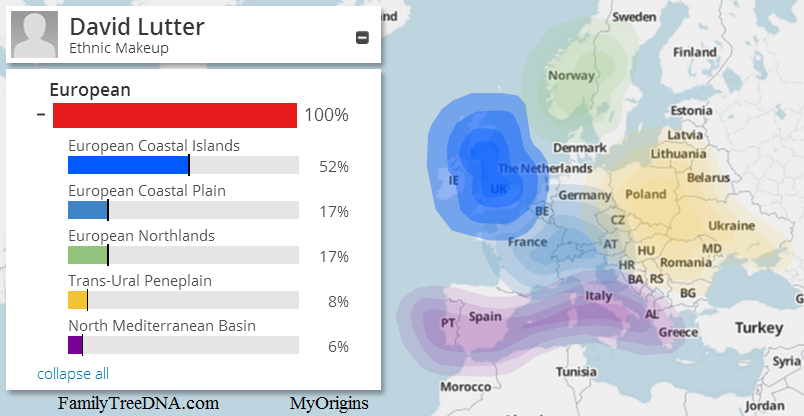 The European designation can be further broken down into areas.  The result is that his ancestry hails from all of Europe, with half from the Coastal Islands- Britain and Ireland.

My mother's results paint her as three quarters Coastal Islands and one quarter "Jewish Diaspora," centralized in Poland.

I expected that my ethnic makeup would be an average of my parents.  Not so with MyOrigins.  My father's inheritance from all of Europe is not reflected in my MyOrigins analysis.  I inherited half of my mother's Jewish Diaspora and the rest of me is Coastal Islands.

Looks like some refinement is necessary to capture the missing heritage.