This is part two of my exploration of the Genographic Project's Geno 2.0 kit submitted by my paternal uncle.  (Prior post:  Regional Ancestry.)

In this post, I discuss Deep Ancestry, the term used by the Genographic Project to describe the information gleaned from haplogroups, which are determined by the Y chromosome ("Y-DNA") and the mitochondrial DNA ("mtDNA").

These types of DNA are useful for both anthropology and genealogy because they pass from generation to generation almost unchanged along prescribed paths of inheritance (father to son for Y-DNA and mother to children for mtDNA).  From an anthropological viewpoint, haplogroups based on Y-DNA and mtDNA reveal the migratory paths of humans across the globe from the beginning of civilization, hence the squiggly arrows on the world map below.  For us genealogists, Y-DNA and mtDNA testing can prove or disprove a genetic relation on a particular ancestral line. 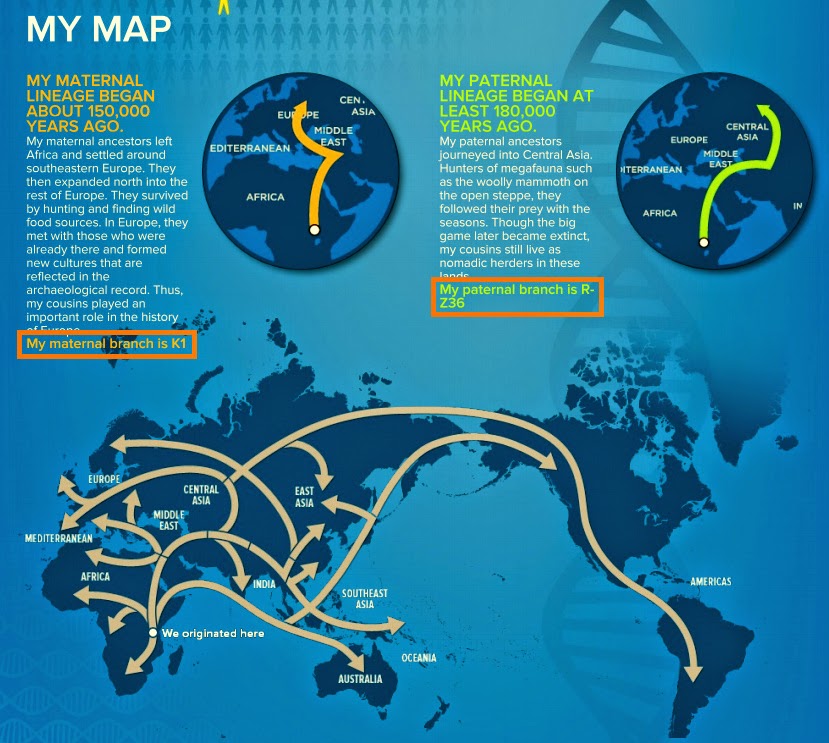 My uncle's haplogroup designations through Geno 2.0 were R-Z36 for his paternal line (Y-DNA) and K1 for his maternal line (mtDNA).  These are common European haplogroups.

These haplogroup designations were interesting because they were already measured in some manner by prior DNA testing of the family.  We'll look at the paternal haplogroup first.

23andMe offers autosomal DNA ("atDNA") testing, not Y-DNA; however, you will receive predictions about your haplogroups.  (Women do not have a Y chromosome, so they will not receive a paternal haplogroup prediction.  A woman's DNA matches at 23andMe are based on autosomal DNA, which comes from both of her parents.)  My father tested at 23andMe four years ago.  His siblings tested two years ago.  My father's predicted paternal haplogroup is R1b1b2a1a2d*.  His brothers tested as R1b1b2a1a2d.  The difference is with the *asterisk*.  All three brothers should have had the same exact result.  According to a customer care page at 23andMe, the *asterisk* indicates that the haplogroup does not fit into any further subgroups.  It is possible that a brother has a mutation and the other does not.  Another factor may be that the testing process slightly differed two years later, when the brothers submitted their samples.  (This is one of the reasons why I caution people to disregard haplogroups when analyzing their matches at 23andMe.)

The best way to determine a Y-DNA match for genealogy is through testing at FamilyTreeDNA.  On the webpage of the Genographic Project was a link to upload results from Geno 2.0 to FamilyTreeDNA- for free!  So I did.  My father and his maternal cousin have already tested their Y-DNA at FamilyTreeDNA. 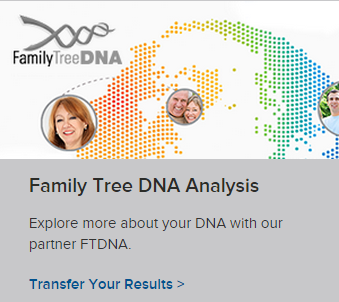 (Haplogroup designations at FamilyTreeDNA and the Genographic Project are abbreviated.)


FamilyTreeDNA shows a deeper subgroup for my father's brother than for my father.  I do not know the scope of the Y-DNA test of Geno 2.0.  The website reads, "The genetic technology we use for our testing is a custom-designed genotyping chip optimized for the study of ancestry, with far more Y-chromosome and mtDNA markers than are available with any other test."  I don't know, at this point, if the difference in haplogroups is because of testing variation or if one brother has a mutation that the other does not.


To illustrate the contrast of the 23andMe haplogroup designation with FamilyTreeDNA, note that 23andMe placed my father's maternal cousins in the same haplogroup as my father's brothers.  Y-DNA testing of one of these cousins places him into a different subgroup from both my father and his brother.

Uploading to FamilyTreeDNA from Geno 2.0 did not allow for matching with others.  (My father's test allows for matching to others, but there are none.  To see men with a common ancestor on their direct paternal line, go to my post about my cousin's matches.)

Next is the mtDNA haplogroup.  Geno 2.0 assigned haplogroup K1 to my uncle.  23andMe assigned my uncle and all of his siblings to a subgroup, K1c2. 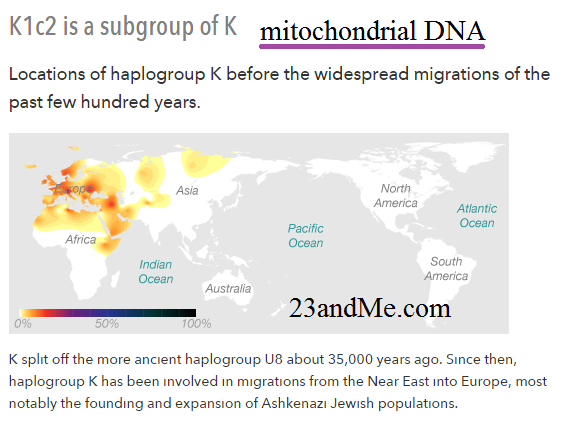 Reflecting back on earlier testing, in the year 2010, my paternal aunt tested simply as haplogroup K at Ancestry.com.  Ancestry no longer offers mtDNA and Y-DNA testing. 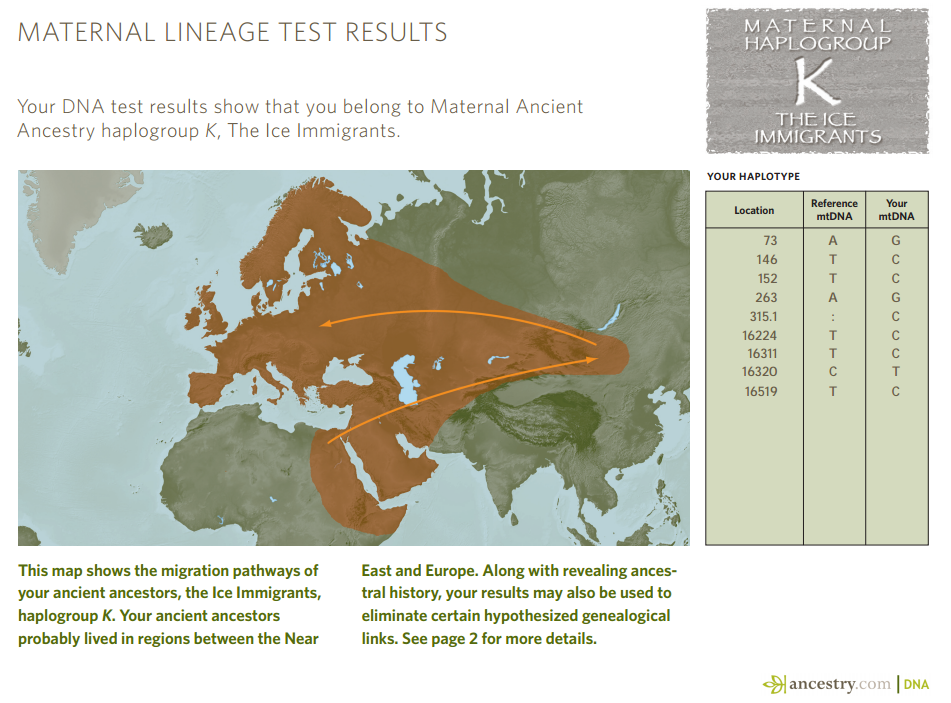 I have not tested anyone's mtDNA at FamilyTreeDNA because the results are likely not genealogically relevant.  Mitochondrial DNA mutates at a much slower rate than Y-DNA.  A "match" in mtDNA may go back thousands of years, before written records.