The Claims Index is an excellent tool for figuring out what happened to someone when other trails run cold.  I'll use Grace Catherine Joyce to illustrate how to use the Claims Index to trace someone.

Grace Catherine Joyce was born January 9, 1917 in California to James William Joyce and Margaret Catherine Mason.  Grace was a second cousin to my maternal grandmother, Jeannette ODonnell (1920-1993).  Their common ancestors were their great grandparents, Peter ODonnell and Margaret Gallagher, who were probably born around 1820 in County Donegal, Ireland.  Jeannette descended from their son, Patrick Francis ODonnell (1856-1931).  Grace descended from their daughter, Kathryn.  I did not know about Kathryn until I read about her in Patrick's obituary in the Bayonne Times newspaper.

This obituary was printed in 1931, so I looked in the 1930 federal census for Kathryn Mason Kennedy in Stockton, California.

In 1930, Katherine Kennedy was residing in Stockton, California with her daughter, Margaret C; son-in-law, James W Joyce; and granddaughter, Grace.

Katherine was not easy to trace.  She moved a lot.  In the 1900 census, she was living in Brooklyn, New York, as the widowed Katie Mason.  Her children, Margarite and John, used the last name Mason.

I did not find Katherine in 1910.  In 1920, she was living in Bridgeport, Fairfield County, Connecticut, with her son, John Mason.  Between the 1920 and 1930 census, Katherine married a man by the name of Kennedy, was widowed, and moved to California to live with her daughter.

In the 1940 census, Katherine is not living with her daughter, Margaret; perhaps she has passed.  This is the end of the trail for Katherine's granddaughter, Grace C Joyce.  What became of her? 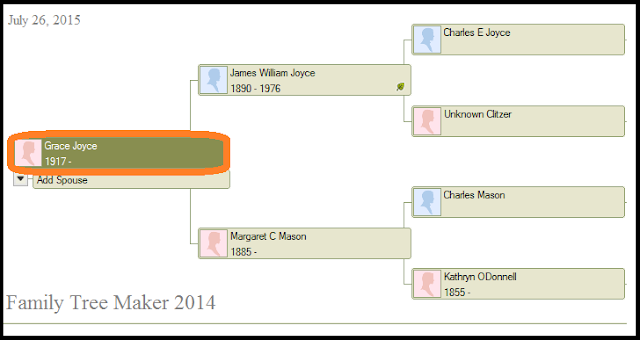 I tried the Claims Index for Grace Joyce.  I searched for someone whose father was James Joyce and mother was Margaret Mason.  Found her. 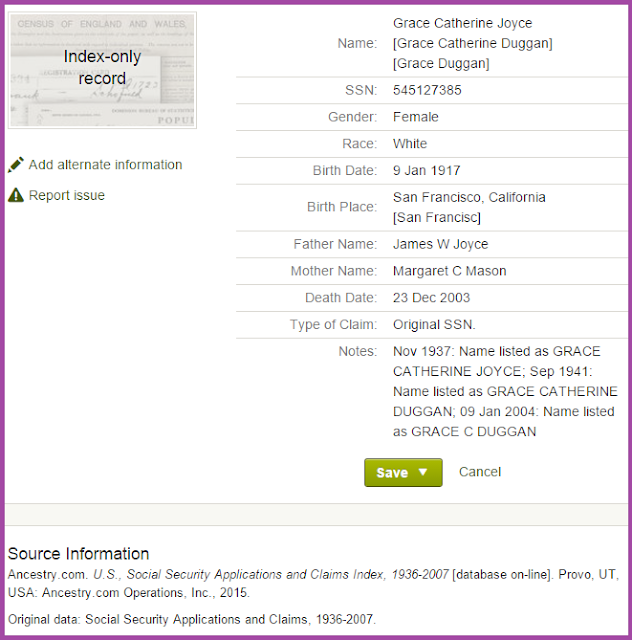 Grace Joyce married Robert Duggan and changed her last name, making it more difficult for me to find her.  But I did.  She died December 23, 2003 in California. 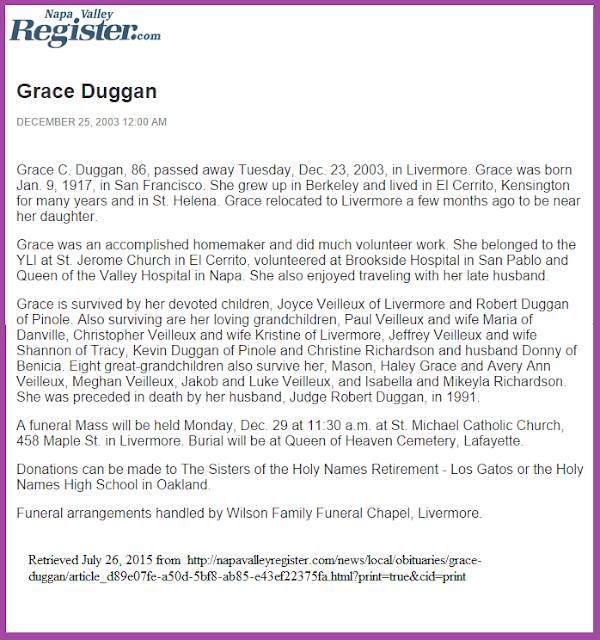