If you have not heard, you can now access digital images of Catholic records on the website of the National Library of Ireland.

A lot of these images are not (currently) indexed.  Some parish pages have links to potential indexes.  You need to know where in Ireland you want to search.  The map is great. 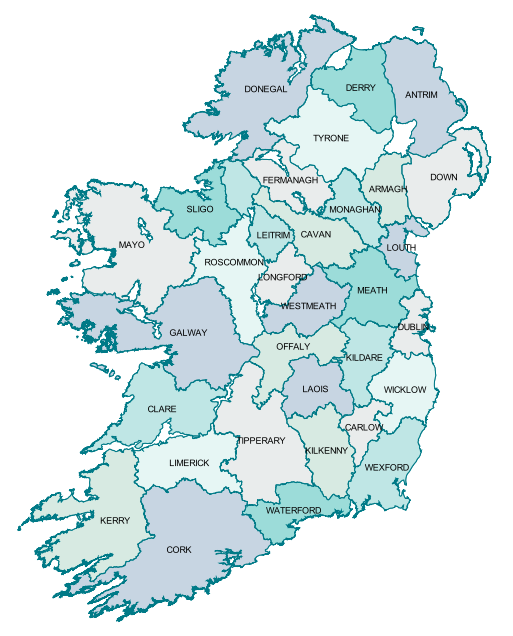 For my maternal grandmother's Irish lines, I only know the origins of her paternal grandfather, Patrick Francis ODonnell:  County Donegal.

I clicked on Donegal and the parishes appeared.  I had to make a further selection.

I chose Ardara based on a poem written by a cousin.  In the poem, Father Charles Leo ODonnell (1884-1934) wrote that his father (Cornelius ODonnell, a brother of Patrick Francis) was from Ardara and his mother (Mary Gallagher) was from Killybegs.  I hoped that Margaret Gallagher, the mother of Cornelius and Patrick ODonnell, was from the same area.

Before you jump into a batch of records without an index, you should map out what it is you are looking for.

Over the years and through many research efforts, this is the little family cluster so far discovered.

Parents:  Peter ODonnell and Margaret Gallagher.  Born suppose about 1820.  (No direct records of them.)

All of the children, except Charles, were probably in the United States by 1880.  I do not know if Peter and Margaret left Ireland.

The records for review for Ardara were:  Marriages 1867-1875 and Baptisms 1869-1880.  These were not years conducive to my little group, but I looked through all the images anyway.  Nothing jumped out at me.  There were lots of entries for ODonnells and Gallaghers, but little information beyond names of the parties and sponsors.

Neighboring Killybegs was my next choice.  These records were for Baptisms 1850-1881.  I was more excited for this collection because these years would contain the five children of Peter and Margaret.  Yet I found no children baptized with parents named Peter ODonnell and Margaret Gallagher.  Again, plenty of people with these surnames.

I found two baptism entries for the year 1855, listing Peter ODonnell as a sponsor.  Margaret ODonnell was also a sponsor for one; Margaret Byam for the other.  "Peter" is not a common name in this collection. 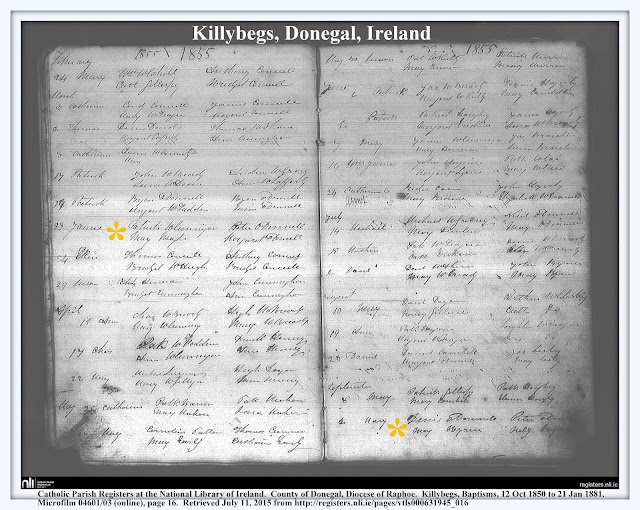 From this information, we don't know if we have the correct Peter ODonnell and Margaret Gallagher.  These records may place the couple in the area.  Perhaps their marriage record and their children's baptismal records are in a neighboring parish, if those years are available.

Of note is that these records from Donegal did not contain any entries for some of the other Irish surnames in my lines:  Preston, Joyce, Sheehey, reflecting Ireland's areas of surname concentrations.