Figuring out another DNA Cousin

I finally figured out the relationship for one of my cousin's closest DNA matches at 23andMe. 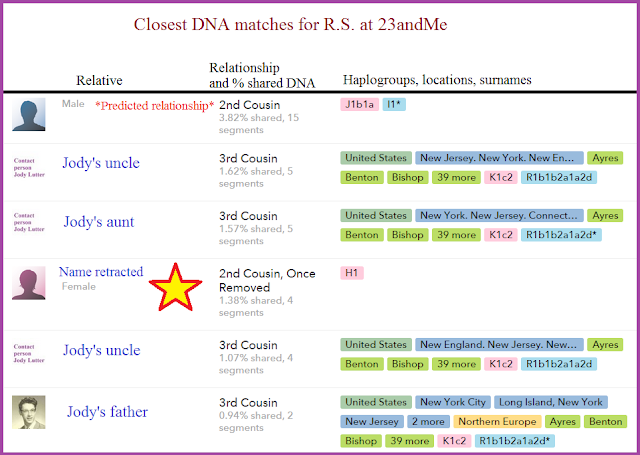 This person falls neatly into line among my father and his siblings, who are third cousins of R.S.  Their common ancestors were Calvin Cook (1826-1889) and Mary Neil (1830-1898) of Morris County, New Jersey.  So this person is around a third cousin to R.S., based on the amount of shared DNA.  I figured that this person was not from the Cook/Neil line because she did not match my father or his siblings.

(The person at the top of the DNA Relatives is a male cousin from the Cook/Neil branch.  I know this, even though this person has not responded to my inquiries, because he also appears in the DNA Relatives of my father and his siblings.)


R.S. and this female cousin share four segments of identical DNA.  (There may be smaller segments, but 23andMe does not report them.)

I reached out to this person and a year later, she gave me some information, thank goodness, because this is what her tree looks like.  (Family trees can be moved from 23andMe to MyHeritage, but I don't like MyHeritage, so my trees stayed at 23andMe.)  She provided me with the surnames of her parents and the location of Bayonne, New Jersey.  No grandparents.  Nope, not adopted.  The only unusual thing here is that she responded.  Most matches never answer.

Based on the amount of shared DNA, I did not need to go back far in either cousin's tree to find ancestors in common.  Her parent's surnames do not match any known ancestors for R.S., so all I had to go on was a location.  Bayonne is in Hudson County, New Jersey, which is a great place to be to look for a match.  Surnames can and will change without rhyme or reason, so look for the same place.

To find commonality in a DNA cousin's tree, look for the same geographic area. 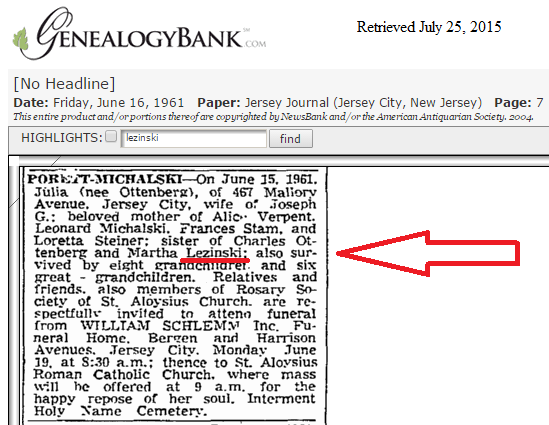 I started with one of the offered surnames, Lezinski, and looked in Jersey City, which is next to Bayonne, and where R.S's ancestors lived two and three generations ago.  Jersey City's newspapers are online at Genealogy Bank (fee-based site).

And here is a connection:  Martha Lezinski mentioned in the 1961 obituary of her sister, Julia Ottenberg- the maternal grandmother of R.S.  Martha and Julia were Catholic, so I found more records online at FamilySearch and the burial search for the Archdiocese of Newark (both free resources).

After some more searching, I discovered that Martha Ottenberg married Vincent Lezinski.  They were the great grandparents of this DNA cousin of R.S., making R.S. her second cousin, once removed.

Martha and Julia were daughters of Simon Ottenberg and Johanna Wolowski.  Julia was born around 1887 and Martha in 1892 in Germany.  I first found Julia in the United States in the 1910 census in Jersey City, when she was already married to Joseph Michalski.  Finding Julia's obituary confirmed other family members.

I hope this narrative provides guidance and inspiration for tackling your DNA matches.