One in a Million

The drawback to AncestryDNA is that you cannot see how much DNA you share with a match, where the identical segments are located, and if your match shares this segment with anyone else.  Maybe if I keep writing this, AncestryDNA will implement this service? 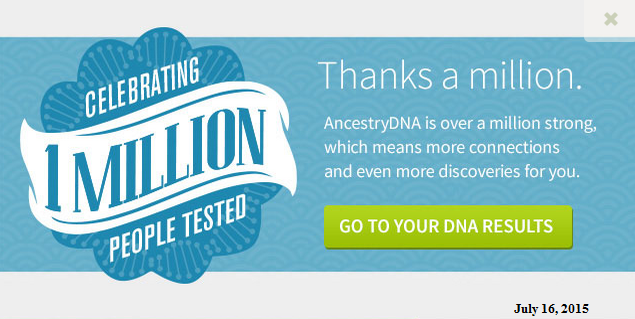 The other part of AncestryDNA's announcement is that it will be offering health information based on DNA, called AncestryHealth.  I immediately thought of 23andMe's difficulties in offering health analysis based on DNA.  Today into my inbox popped an email from 23andMe, asking me for additional saliva samples "to help us affirm our laboratory processes" in a "validation study."  The email stated, "23andMe is working closely with the FDA to provide the next generation of health reports.  An important step toward re-introducing health content is by validating the accuracy and reproducibility of our testing processes for a wide range of customers." 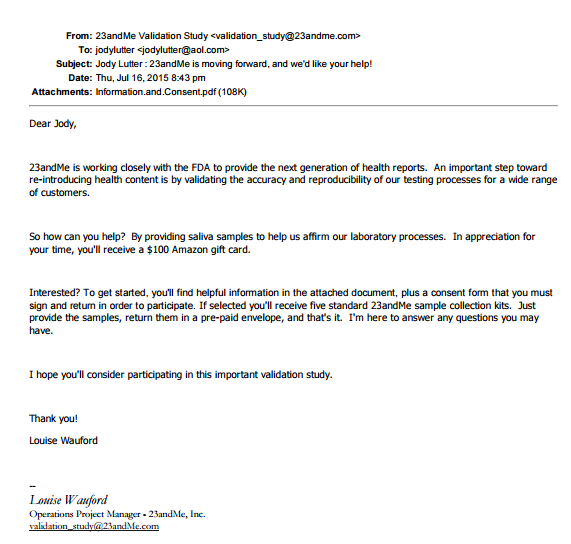 None of the other 23andMe accounts that I manage received this email.  I don't know if I was selected at random or because I am active on the site.  Everyone can't submit new saliva samples- one of the people I tested, my mother, has since passed.

The lure of testing DNA at Ancestry was that most of the customer base should test for genealogy, whereas 23andMe's customers tested for health, genealogy, or both.  I tested at 23andMe for genealogy purposes, but I reviewed the health results out of curiosity.  23andMe detected that some family members and I carried a hereditary gene mutation that corresponded with clinical symptoms we were experiencing, causing us to seek specific medical testing that confirmed a diagnosis.

My frustration at 23andMe is that people who tested for health reasons elect to place themselves in the genealogy database as well.  My DNA cousins are mostly anonymous and do not respond.  Sometimes someone will answer me, explaining that they are not interested in finding relatives.  "You can remove yourself from the database," I explain, to no avail.