The prior article concerned DNA cousins in common.  Finding DNA cousins who match you and some of your other DNA cousins is not uncommon.  You must be careful in drawing inferences in these situations.

Finding cousins in common is a tool at FamilyTreeDNA and GedMatch.  You can manually compare cousins at 23andMe to ascertain if someone matches your cousin- as long as everyone is sharing genomes.  The glitch arises when two of your cousins match each other, but not on the same segments of DNA where you match each of them.

The query:  If three people share different segments of DNA with one another, are they related through a common ancestral line?

Unless the match is very close, I don't pursue cousins in common.  Early on in my genetic genealogy pursuits, I was overwhelmed with my mother's DNA matches.  They matched her and her other DNA cousins, though not on the same segments.  To this day, I have no direction in this undocumented branch of her family tree.  These cousins either live in or have recently immigrated from Eastern Europe.

Two years ago, my maternal third cousin appeared among the matches at 23andMe.  We share a pair of great great grandparents, John Preston (1857-1928) and Bridget Sheehey (1857-1916).  John was born in Dutchess County, New York to Irish parents.  Bridget was born in Ireland.  (I have no idea where in Ireland they lived.)

Here is the graph of his shared DNA with my mother- three segments:

With this new close cousin's DNA, I compared him to my mother's distant DNA cousins to round up some people that we could place in the Preston/Sheehey branch.


Comparison of my mother's distant DNA cousins from Eastern Europe revealed that this Irish Preston/Sheehey cousin matched a lot of them on multiple segments.  Lots of cousins in common, but from different branches of their respective trees.  To date, no DNA cousin from Eastern Europe matches my mother and this Irish Preston/Sheehey cousin on the same segments. 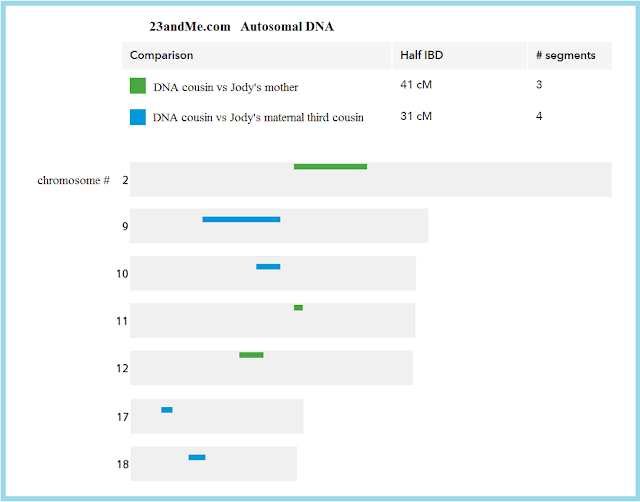 The point is to be cautious when looking at cousins in common who do not share the same DNA segments.