A Brady cousin has been found!  She came forward after discovering the match through DNA and then checking family trees.  H.M. and R.S. are third cousins.  The common ancestors are their second great grandparents, Patrick Brady and Eliza Duffy (1837-1918).

[R.S. is my father's third cousin, but through different ancestors, Calvin Cook (1826-1889) and Mary Neil (1830-1898).  R.S. is also my mother's cousin.  We do not know which ancestors they have in common.  Testing my mother's close cousins narrowed down the possibilities to the O'Donnell/Joyce branch in my mother's tree.  R.S.'s match with my mother will be in one of his Irish branches.  I was concentrating on Brady/Duffy.  We'll look at those DNA comparisons in future posts.]

Part One:  DNA
Although the DNA tests were done at different companies (23andMe and AncestryDNA), both were uploaded (for free) to GedMatch.com, which is where the connection was discovered.  (You can do this too!)

These third cousins share two segments of DNA.  They share less DNA than R.S. shares with my father and his siblings, even though they all have the same degree of relation.  This is because the amount of DNA shared among close relatives skews beyond the initial parent-child relationship.  At the third cousin level, you begin to see no shared DNA.

I have no dates for Patrick Brady because I have no records for him.  Brady and Duffy are common Irish surnames and there is no shortage of people with these names in New York City and Jersey City, the target areas of my search.


My strategy for reconstructing this family was to gather all of the children and follow them.  This is not easy in Irish families because they gravitated towards the same Irish names.  I came up with seven children for Patrick Brady and Eliza Duffy, all born in Ireland approximately between 1850 and 1871:

Figuring out the oldest child and youngest child is important for creating a timeline: when the couple married, when the father died, when the family immigrated to the United States.

Bernard appears to have been the oldest sibling.  His descendants provided details of his life.  Bernard married Mary Dineen.  In 1885, their first child, Lizzie, was born in New York City at 746 Greenwich Street.  Bernard later appears in the New York City directories at this address.  A marriage record for Bernard Brady and Mary Dineen has not yet been located.

Searching for Bernard's father, Patrick Brady, in New York City is no easy task.  Look at how many men are named Patrick Brady. 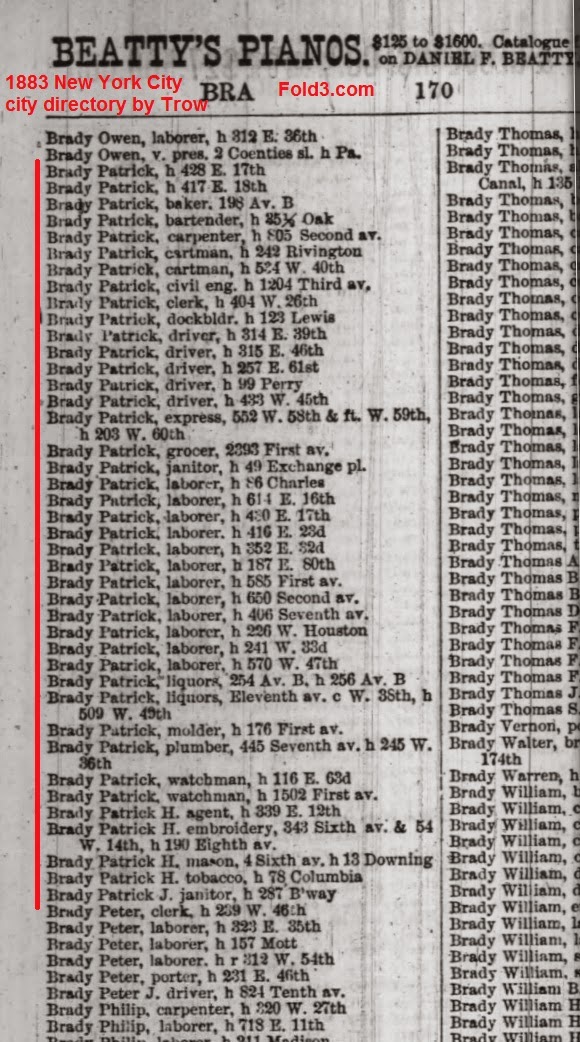 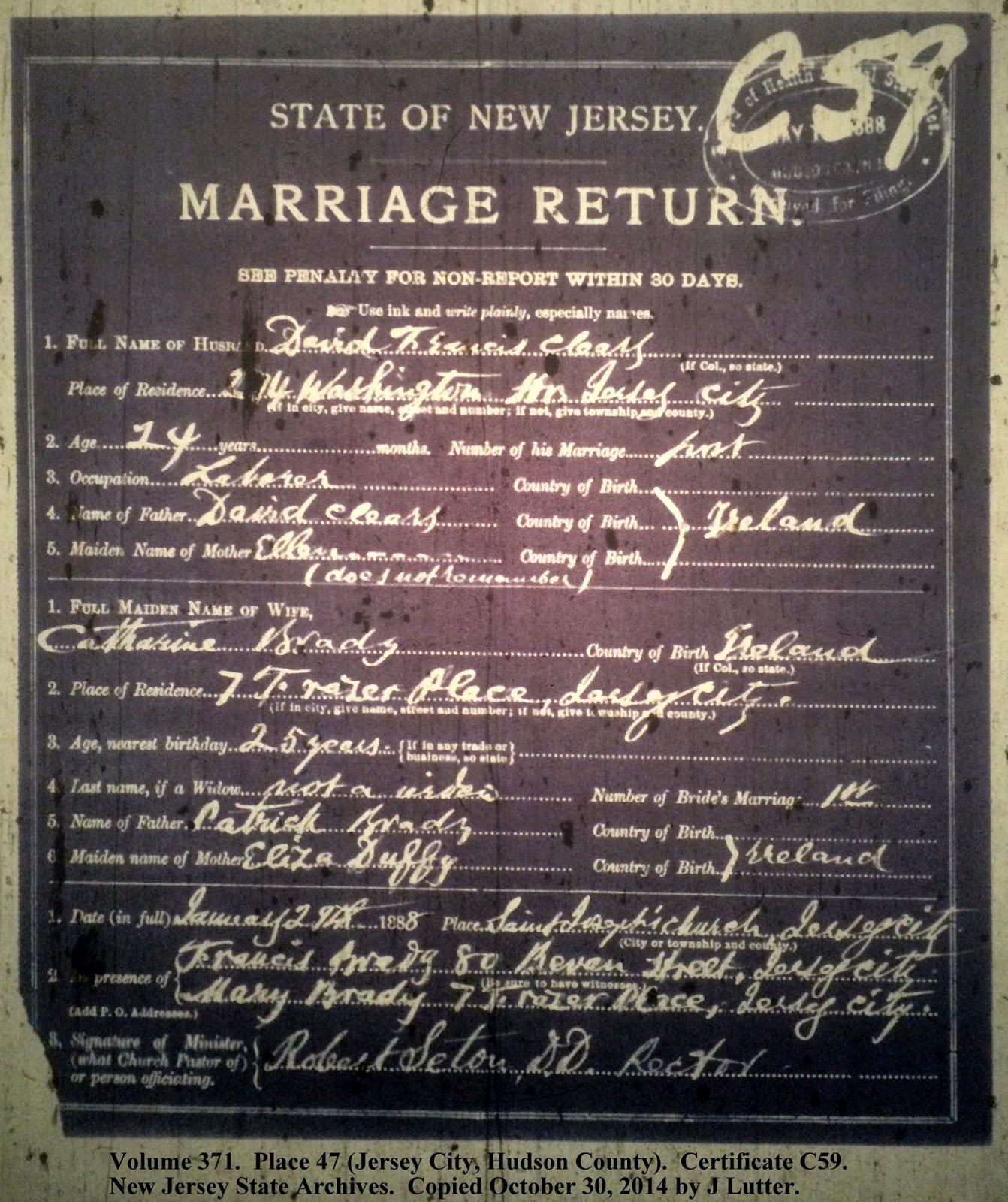 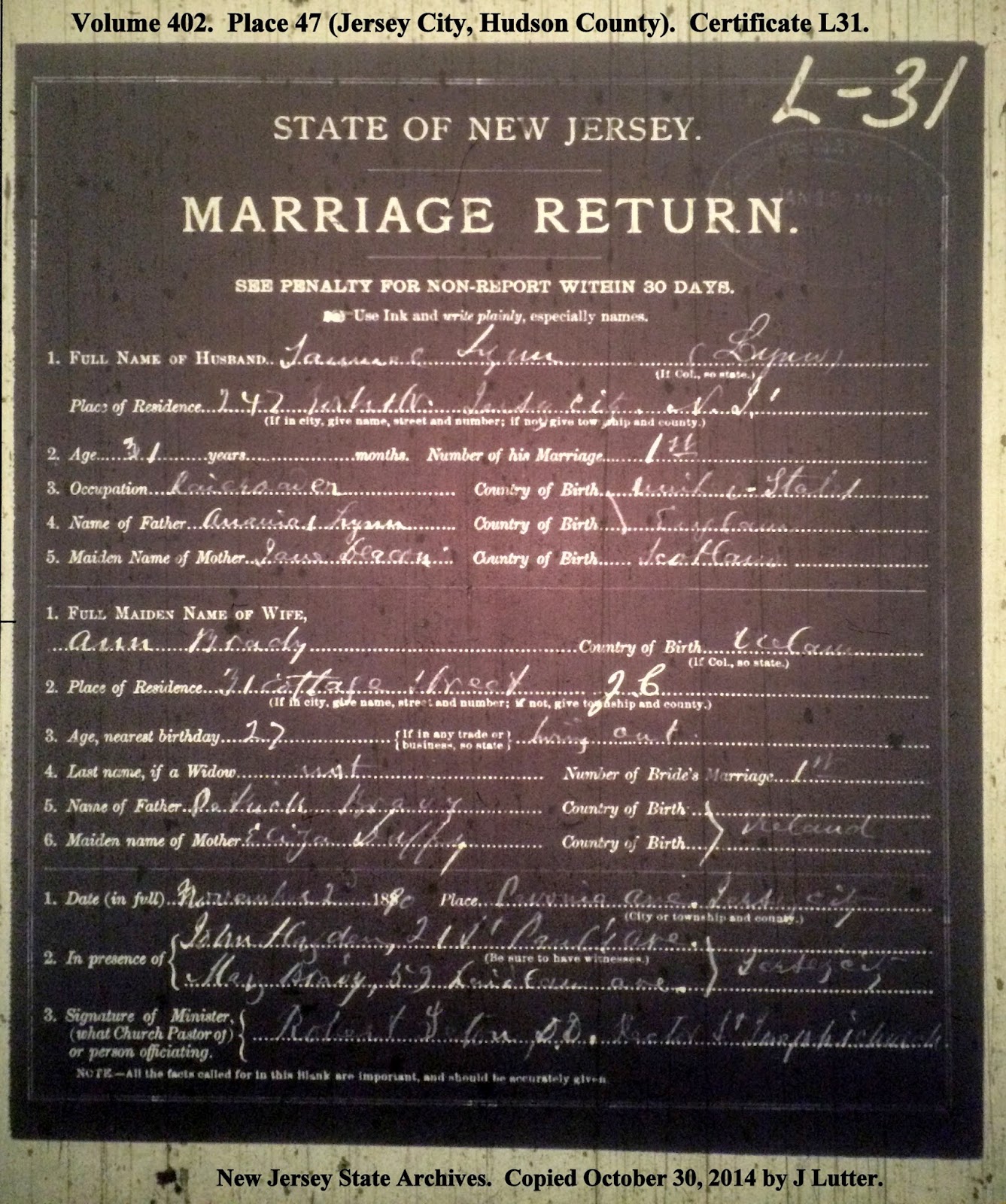 The 1885 New Jersey State census is indexed at FamilySearch.  I located a possible entry for this Brady family in Jersey City. This entry is for Eliza and her seven children.  Barney, or Bernard, is out of birth order.

Never one to rely on an index, I found the microfilm at the Jersey City Public Library. 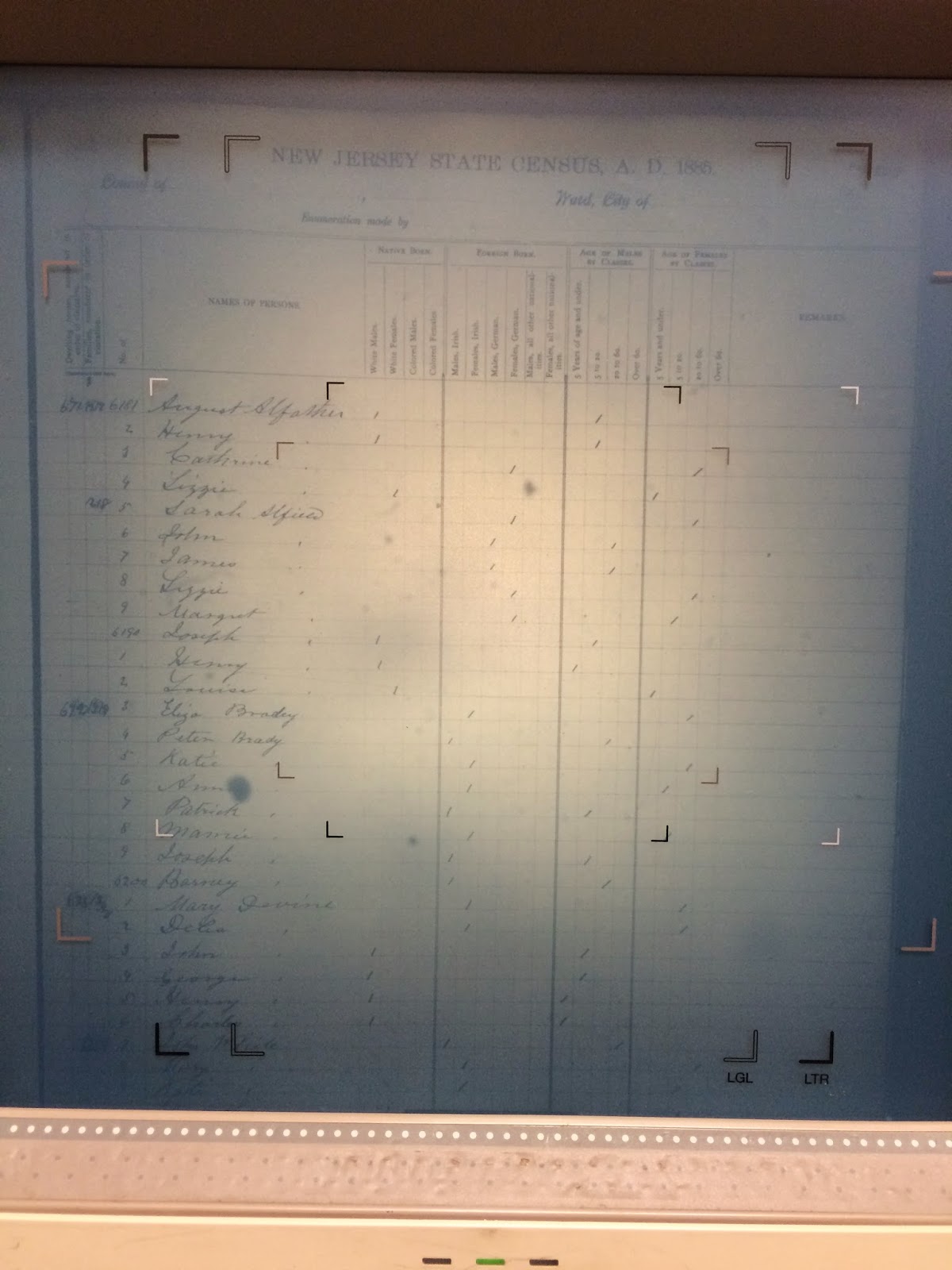 The numbers to locate this entry were accurate; this is page 207, family 1219, in District 4.  The only issue was that there are several precincts in the district.  This is Precinct 6.  Street addresses are not given. 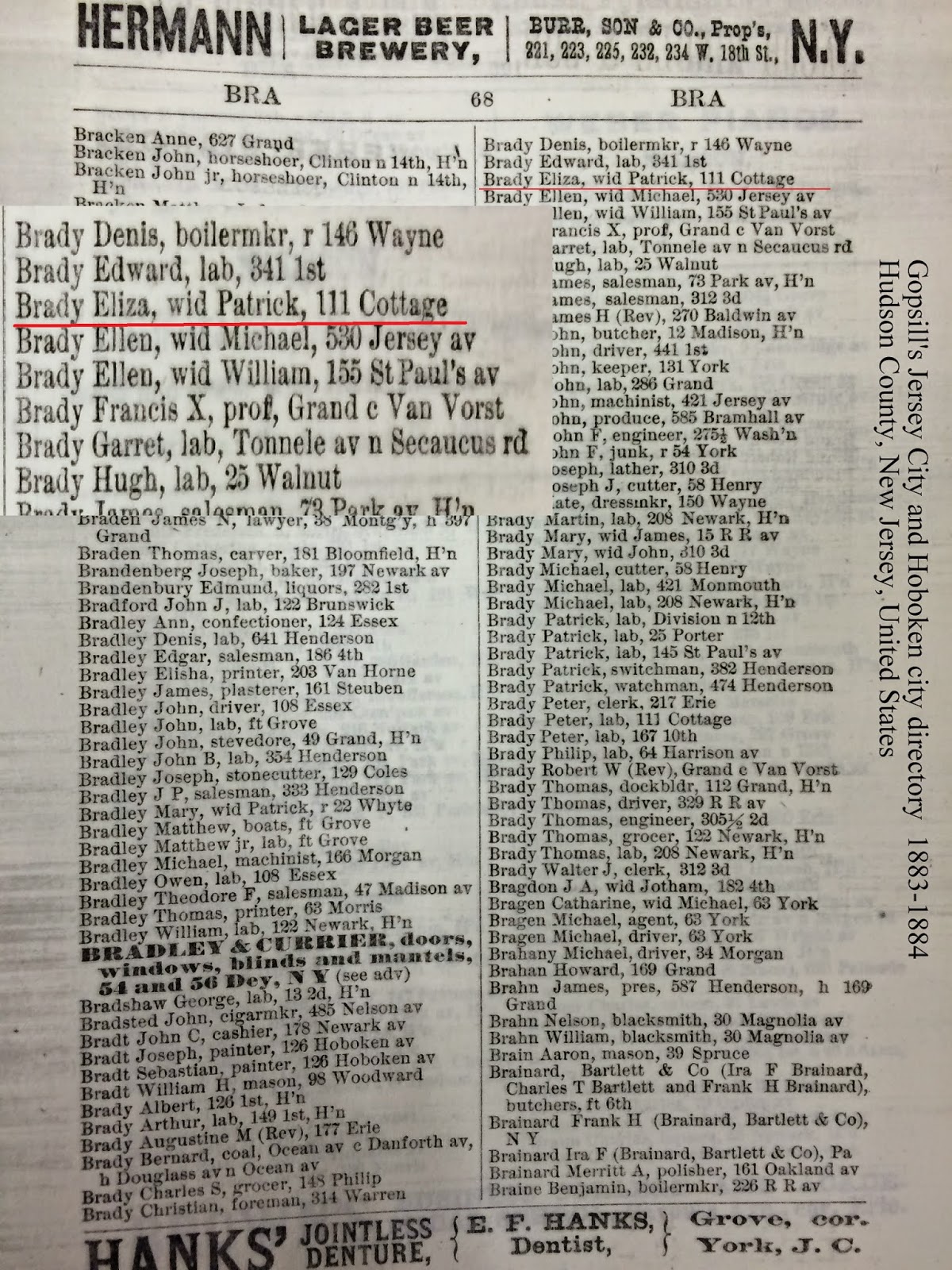 At this point, we can say that the family came to the United States sometime after the birth of the last child in Ireland, around 1871, and before 1883, when Eliza is listed as Patrick's widow in the city directory.

For further research:
--- Did Patrick Brady come to the United States with his wife and children, or did he die in Ireland?
--- Did the family live in New York City before settling in Jersey City in the early 1880s?  Were they in the United States for the 1880 federal census?  (I have not found a good match for them in 1880.)
--- Where was Bernard Brady's wife, Mary Dineen, living before the marriage?  Where is the marriage record?

Fast-forwarding to the 1895 New Jersey State Census, Eliza is living with only one child, Joseph Brady (died 1911).  Also living with them are two women with the surname Duffy:  Annie and Mamie.  These are potential relatives of Eliza who also need to be tracked down. 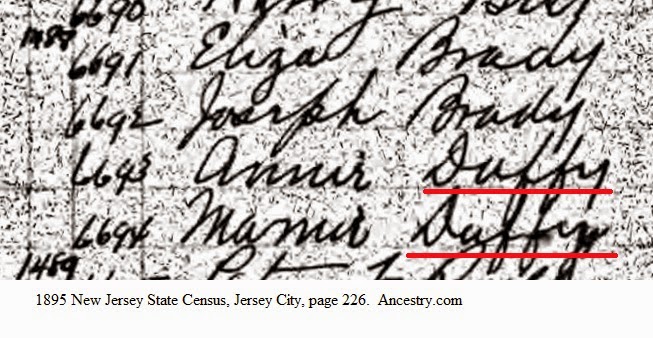