His Excellency James Roberston Esquire Captain General and Governor in Chief in and over the Province of New York and the Territories depending thereon in America, Chancellor and Vice Admiral of the same, and Lieutenant General of his Majesty's Forces.

To All to whom these presents shall come or may in any wise Concern.  Sendeth Greeting.

Know ye that at Queens County on the thirtieth day of July last past before Samuel Clowes Esquire thereunto Delegated and appointed, the last Will and Testament of Joost Duryea Deceased (a copy whereof is hereunto annexed) was proved, and is now approved and allowed of by me; and the said Deceased having whilst he lived and at the time of his death Goods Chattels and Credits within this Province, by means whereof the proving and registring the said Will and the granting administration of all and Singular the said Goods Chattels and Credits, and also the auditting allowing and final discharging the Account thereof doth belong unto me; The administration of all and singular the Goods Chattels and Credits of the said Deceased and any way Concerning his Will is granted unto John Wortman, Gabriel Duryea, Abraham Muntfort, and Willits Kirby the Executors in the said Will named, the three former being duly sworn and the latter being duly affirmed well and faithfully to administer the same, and to make and Exhibit a true and perfect Inventory of all and Singular the said Goods Chattels and Credits and also to render a Just and true account thereof when thereunto required.  In Testimony whereof I have Caused the Prorogative Seal of the Province of New York to be hereunto affixed at Fort George in the City of New York the thirty first day of August one thousand seven hundred and Eighty One. -------- Sam Bayard Jun Secr'y-----

To All Christian People to whome these presents shall come or any ways Consern.  Know yea that I Joost Deray, of the Township of Oysterbay in Queens County on Nesaw Island and Province of New York, yeoman, being this first day of April in the year of our Lord Christ one thousand seven hundred and eighty one, being in but a weakly state of Helth but mind and understanding quick and good and well knowing that it is appointed for all men once to Dye, I therefore am desirous to sett my outward house in order, before my final change doth Com, do therefore make my last Will and Testament in the following manner.

First I commend & Commett my Soul to God that gave it me and my Body to the Earth to be Buried with a Christian Buriel at the descresion of my Executors hearin after mentioned and named, and as Touching such Outward Estate wharewith it hath pleased God to bestow upon me.  I will and Devise and dispose off as is hereafter directed and expressed.

Item.  I will order and direct my Executors hearin named to fulley pay all my Just Debts and and funal Charges and all other Expences that arices in the Execution of this my Will.

Item.  I will and bequeath unto my Will beloved wife Willimpey Dereay two of my best Beds and full furneture and my best horse and and riding Chais, my Cubbord, two Tables, Looking Glass, and house hold furneture of all sorts and all Kinds that is in my house suffecent to furnish her for house keeping at the discresion of my Excetors with Suffientcey of meat and bread Com to last her one whole year after my Dcease with two of my best swine and the use and profit of all that of my Lands which my Son George Dereay leased to me and my wife, Referances thereunto being had to said lease.  I also Will and bequeath unto my said Wife the full and Just sum of two hundred pound good Currant Lawfull money paid her by my Exectors within three month after my Decass all which I give her at her one free Disposal.

Item.  I will and bequeath unto my Daughter, Willimpey Dereay, the next Choice of my Beds and full furneture, and the full and Just Sum of Thirty pounds of good Current money as above said to paid her within four month after my Decass.

Item.  I will and bequeath unto my Grandson, George Dereay, son of Jacob Dereay, the Sum of ten pound.

Item.  I will unto my Grandson Rulaf Dereay, son of John Dereay, the sum of ten pound all Currant money to be putt on Intrust untill they arrive to Lawfull age and then paid them with the Instrust.

Item.  I will unto Nealey Noostrand the sum of twety Pound paid her when my Excutors shall think proper for the use of her Lawfull Children or Lawfull Hars – Twenty.

Item.  I will and bequeath unto my Son, George Derea, and to his Hares and Assigns and to there free disposal all that of one Shilling Rite of Land in the Common in the Township of Hempsted which I Borgt of James Pearsall of Huntington in Seffas County.  I also give and bequeath unto my Son, George Dereay, twenty one Acres of plain Land which I bought of Jonathan Pratt, situated in Oysterbay Plain with all my ?ites of Land whatsoever that is not already given away and disposed of to him, the said George Dereay, and to his Hares for Ever and to there free disposal.

Item.  I will and bequeath unto my Son, Charles Derea, the sum of five Shillings paid him within One year after my Decass, which makes with what I have before given him his full Shear and Deviden of my Estate.

Item.  I will and bequeath unto my Sun in Law, Gareet Noostrand, the profit and Intrust of one Eleventh part of the neet prosad paid him so long as he liveth and Provided my Daughter, Cornelia, should have Lawfull Children, then the principal or one Eleventh part shall be equal divided between her Lawfull Children, but in Case my Daughter should live to be a widow, then I give and bequeath the one Eleventh part paid unto her and at her own free disposal.  I also give and bequeathto Nelas Lawfull Hars a Bond I have against her Husband, Garret Noostrand, Dated ye twenty first of March 1781.  Condition of one hundred pound fourteen Shilling three pence, to be paid them when they arrive to Lawfull age & the Instrust yearly paid to there Mother, Nealey Noostrand.  And in Cass that Nealy should not have Lawfull Isseu- and should Dceass before her Husband, Garret Noostrand, then it is my will and I do Order and direct that her Eleventh part and the Bond or money due on Noostrands Bond be equally divided between George Dereay John Dereay and Jacob Dereay Children and Mary Bennet and Willempy Dereay in this Preposan.  George Dereay to have as much as the Children of John & Jacob Dereay, Dceased, and Woman to have half as much and the true intent and meaning is that if Cornelia Noostrand shod Decass not having Lawfull Chldres or Decass before her Husband then her part or Devidan be Devided into six parts.  George Dereay to have two parts, John Dereay Children to have one part, Jacob Dereay children to have one part and Willimpy Derey to have One part and Mary Bennet One part.

Lastly I do hereby Ordain Constitute and appont my Friends and Neighbour John Wortmon, Willits Kirby, Gabiral Dereay and Abraham Monfoort all of the Township Oyterbay in Queens County my Excutors to this my last will and Testement disenwlling and Revoaking all other and former Wills in Wittness whereof I the said Joost Dereay have hear unto sett my hand and fixed my Seal the day and the Date above written ----------------- Joost Durya LS

Be it Remembered that on the Thirtyeth day of July One thousand Seven hundred and Eighty One personally came and appeared before me Samuel Clowes Surrogate of the Said County John Wright of the Township of Oysterbay of said County yeoman and being duly affirmed Declared that he did see Joost Duryea sign & seal the within written instrument, purporting to be the Will of the said Joost Duryea bearing date the first day of April One thousand seven hundred and Eighty one, and heard him publish and Declare the same as and for his last Will and Testament; that at the time thereof he the said Joost Duryea was of sound disposing mind and memory to the best of the Knowledge and Belief of him this affirmant; and that his name subscribed to the said Will, is of his own proper hand writing which he subscribed as a Witness to the said Will in the Testators presence – and that also that he this affirmant did see Isaac Wright and George Montfort the other witnesses to the said Will subscribe their names as Wittnesses thereto in the Testators Presence.  ----------------------  S Clowes Surrogate 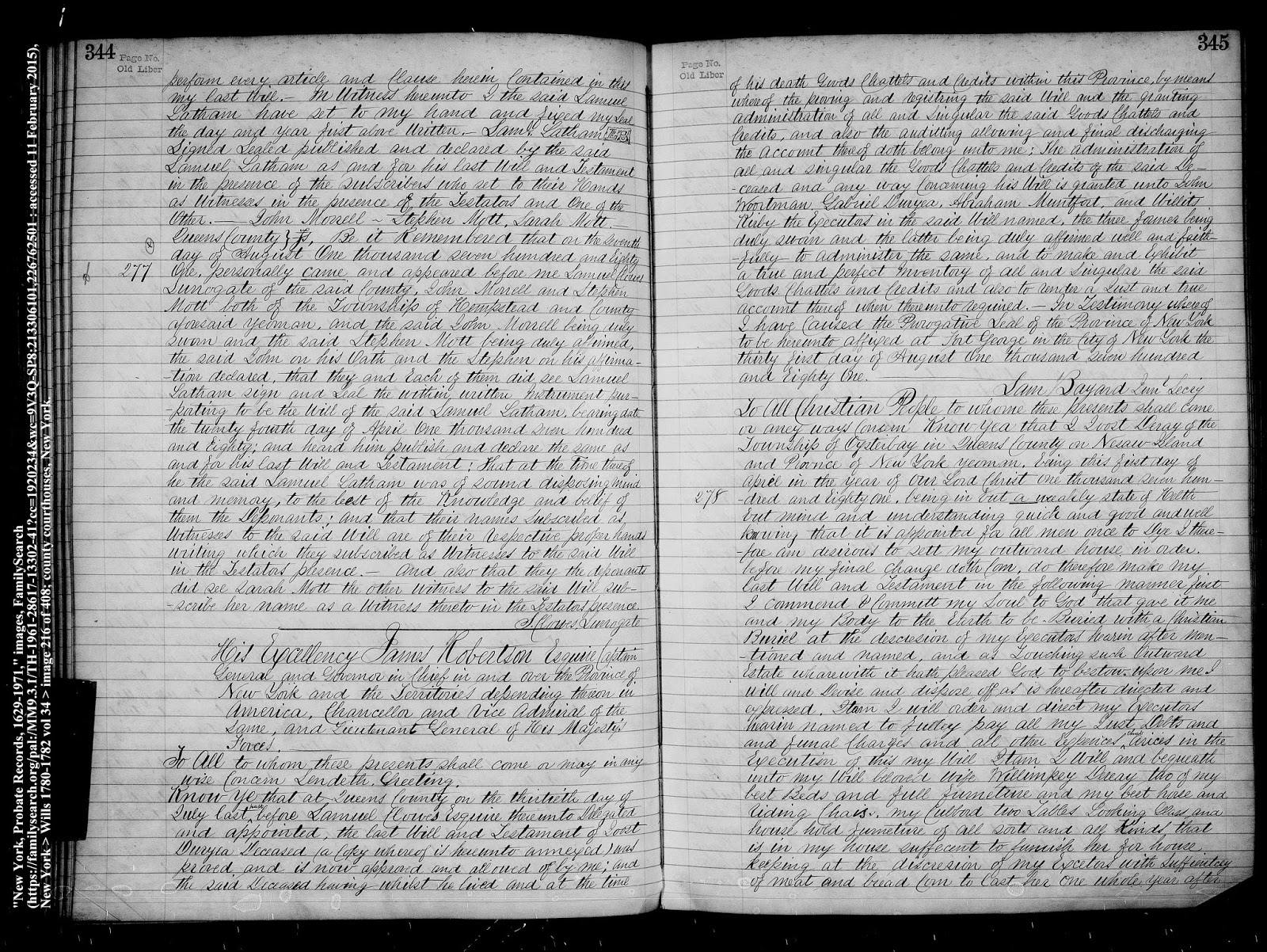 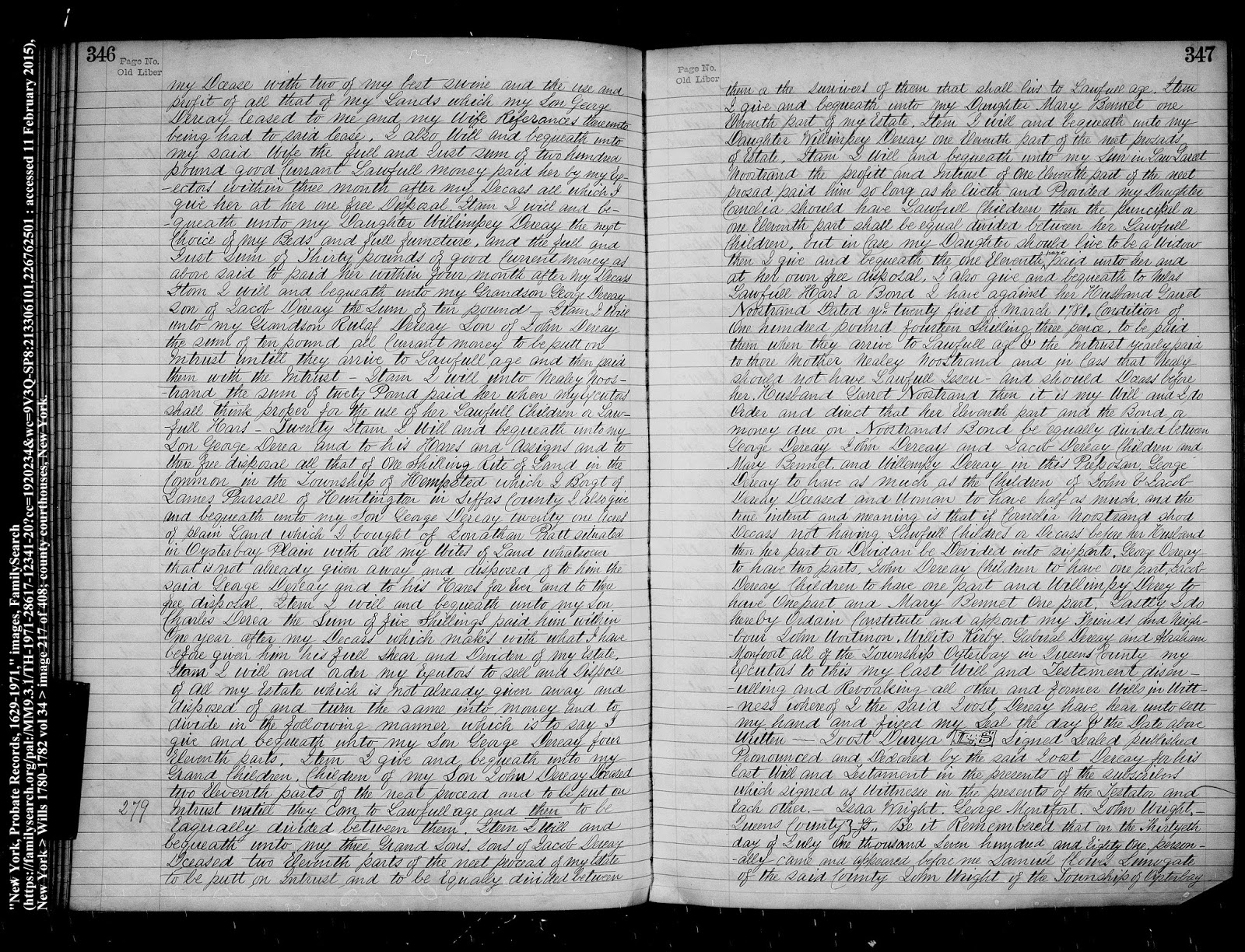 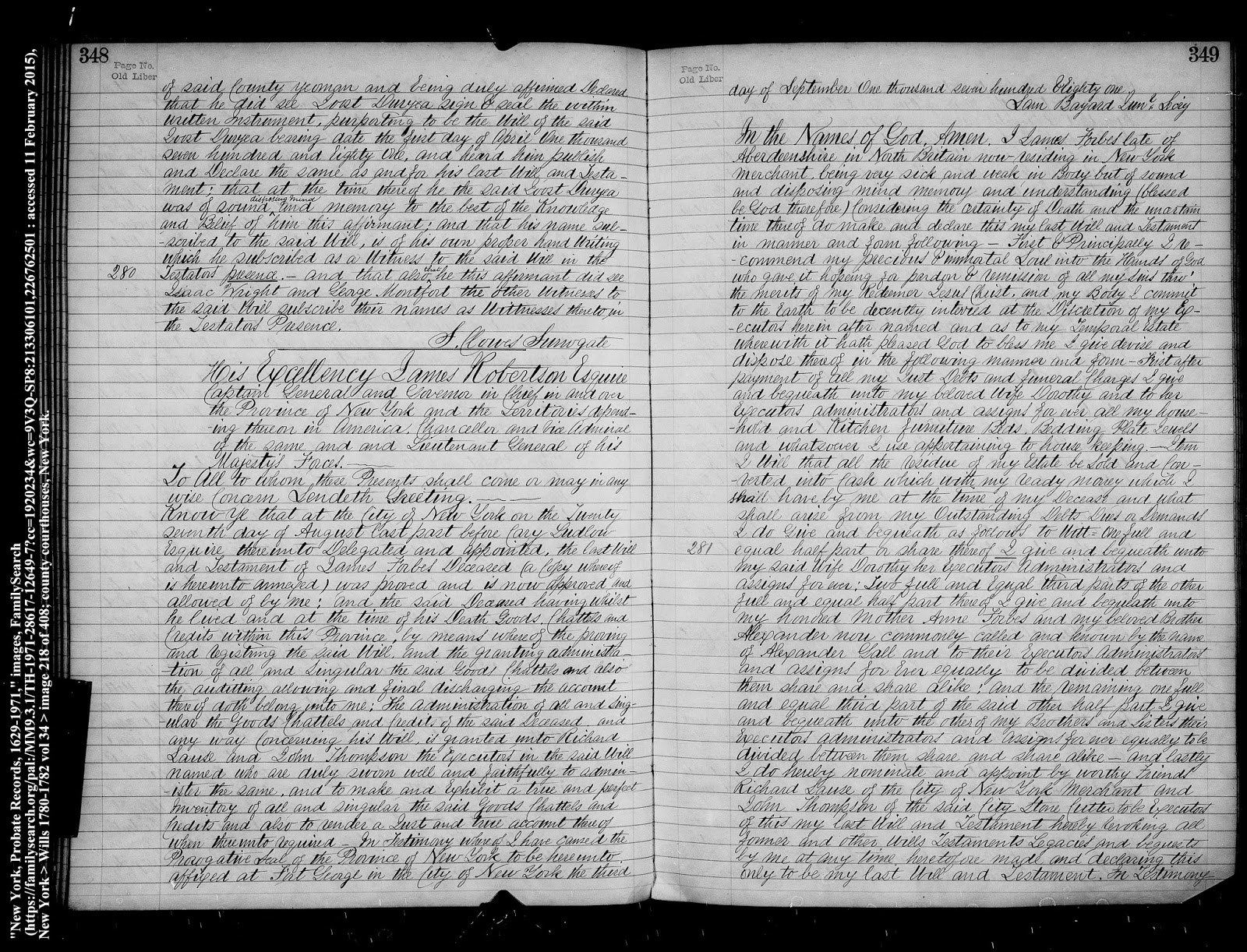