His Excellency James Roberston Esquire, Captain General and Governor in Chief in and over the Province of New York and the Territories depending thereon in America, Chancellor and Vice Admiral of the same, and Lieutenant General of his Majesty's Forces.

To All to whom these presents shall come or may in any wise Concern.

Know ye that at Queens County on the Twenty second day of July last past before Samuel Clowes Esquire, thereunto Delegated and appointed, the last Will and Testament of Williampee Duryee Deceased (a copy whereof is hereunto annexed) was proved, and is now approved and allowed of by me; and the said Deceased having whilst she lived and at the Time of her death Goods Chattels and Credits within this Province, by means whereof the proving and registring the said Will, and the granting Administration of all and singular the said Goods Chattels and Credits, and also the Auditting allowing and final discharging the Account thereof doth belong unto me; The administration of all and Singular the Goods Chattels and Credits of the said Deceased and any way Concerning her Will is granted unto Garret Nostrand, Nicholas Bennet, and Williampee Duryee, the Executors and Executrix in the said Will named, who are duly sworn well and faithfully to administer the same and to make and Exhibit a true and perfect Inventory of all and Singular the said Goods Chattels and Credits and also to render a just and true account thereof when thereunto required.

In Testimony whereof I have Caused the Prorogative Seal of the Province of New York to be hereunto affixed at Fort George in the City of New York the ninth day of August one thousand seven hundred and Eighty two. -------- Sam Bayard Jun Secr'y-----

To All Christian People to whome these presents shall come or any ways Consern.

Know yea that I Williampe Durye, Widow of Joost Durye, late Deceased, of the Township of Oyster bay in Queens County on Nesaw Island & Provens of New York, being this second day of August in the year of Our Lord Christ one thousand seven hundred and Eighty one, being in a good State of Health and mind and understanding quick and good and well knowing that it is appointed for all men once to die, I being therefore desirous to sett my outward house in Order before my final change doth Come, do therefore make my last Will and Testament in the following manner.

First I Commend & Committ my Soul to God that Gave it me and my Body to the Earth to be Buried with a Christial Burial at the discression of my Executors hearin after named and appointed and as Touching such Worldly and Outward Estate wharewith it hath pleased God to Bestow upon me.  I Will and devise and dispose of as is hereafter directed and expressed.

Item.  I will and Order all my just Debts and Funeral Charges and Expences all fully paid before any divid be made.

Item.  I Will and Bequeath unto my Son Charles Dereaye, son George Durye, the Lame Boy the just and full Sum of Ten pounds York Money to be put on Instrust for him until he arrives to Lawfull Age and then paid him with the growing Intrust and in Case he the said George Durye should not live to be of age then the said Ten Pounds and Instrust shall be divided equally between his Brothers and Sisters.

Item.  I Will and Bequeath unto my Daughter Willempey Durye, one the best of my Cows, six Puter Platts, three Platters, two Basons, Six knives and forks with all Tea Tacklin and Chaney Ware.

Itam.  I Will and bequeath unto Cornelia Noostrand my great Family Bible.

Item.  I Will and bequeath unto Mary Bennet one Large Pewter Platter marked M.R.T. which was my Mothers.

Itam.  I do give and bequeath all the Remainder of my Estate of all kinds and of all Nature whatsoever unto my three Daughters, namely Cornelia Noostrand, Mary Bennet, and Willimpey Durye and to be equally Devided between them as they shall think proper, and in Case that either of them should decease before they shall Reive ther third part, then my Will is that their part shall be equal Devided between there Lawfull Children or Haires.

Lastly I do hereby Ordain and appoint my two Sons in Law Garret Noostrand and Nicholas Bennet, both of the Township of Oysterbay, my Executors and my Daughter Willimpey Durye my Exectruk to this my last Will and Testament.

In Witness whareunto I the said Willimpey Durye have hear unto sett her hand and fixed my Seal the day and year above written, upon y second Consideration I give unto Willimpy Durye my side Sadel and Brass Kittell done before signed over and above, the above a fore mentioned things.  ----------------  Willime Durye LS

Be it Remembered that on the Twenty second day of July One thousand Seven hundred and Eighty two, Personally came and appeared before me Samuel Clowes Surrogate of the Said County John Wright of Oyster bay of said County yeoman and being duly affirmed, declared that he did see Williampee Duryee sign and Seal the within Written Instrument, purporting to be the Will of the said Williampee Durye; bearing date the second day of August One thousand seven hundred and Eighty one, and heard her publish and declare the same as and for her last Will and Testament.  That at the Time thereof she the said Williampee Durye was of Sound disposing mind and memory to the best of the Knowledge and belief of him this affirmanant; and that his name subscribed as a Witness to the said Will, is of his Own proper hand Writing which he subscribed as a Witness to the said Will in the Testators Presence – as also that he this affirmanant did see Isaac Wright and Jordan Wright sign their names to the said Will as Witnesses thereto, and that in the presence of the Testator.  ----------------------  S Clowes Surrogate 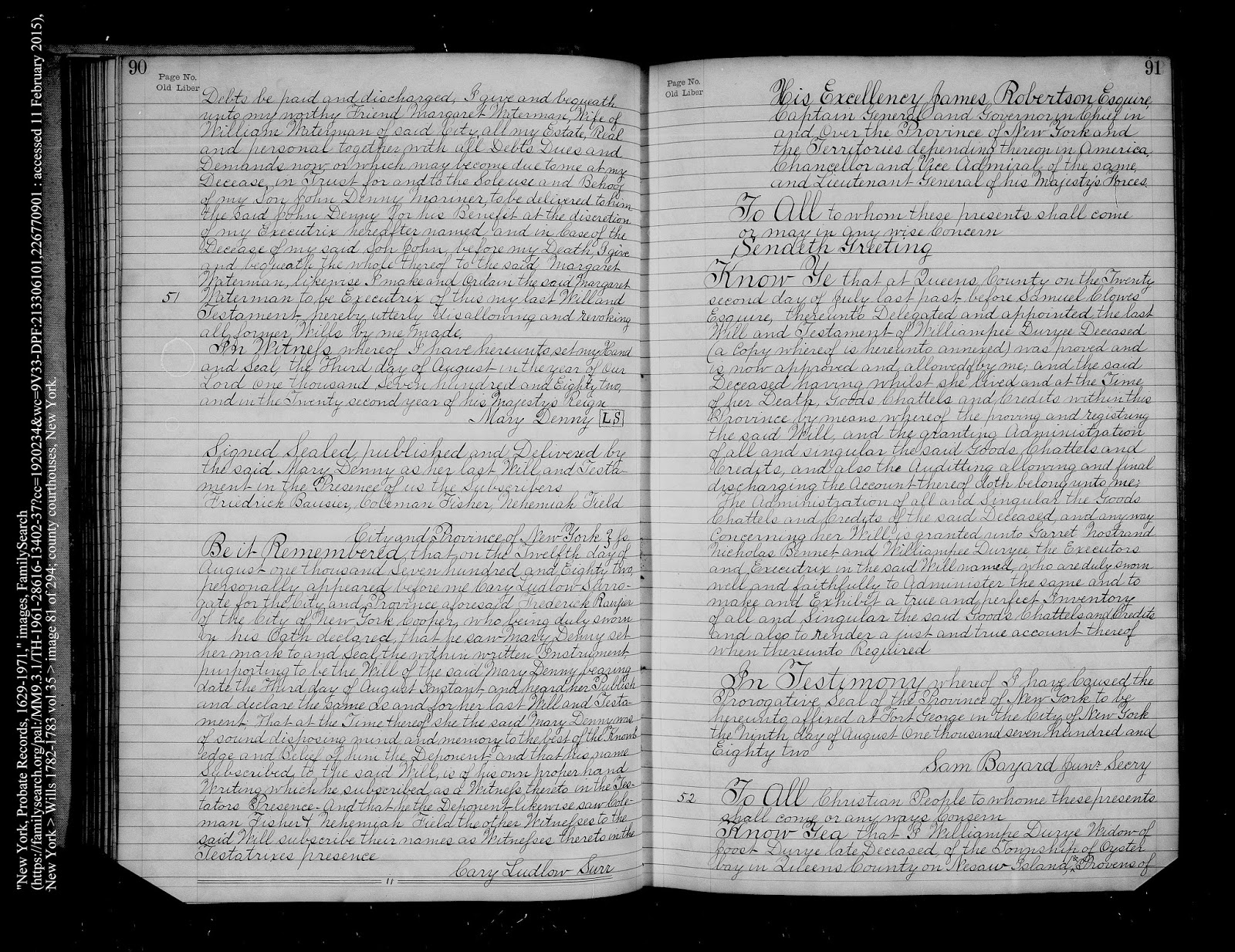 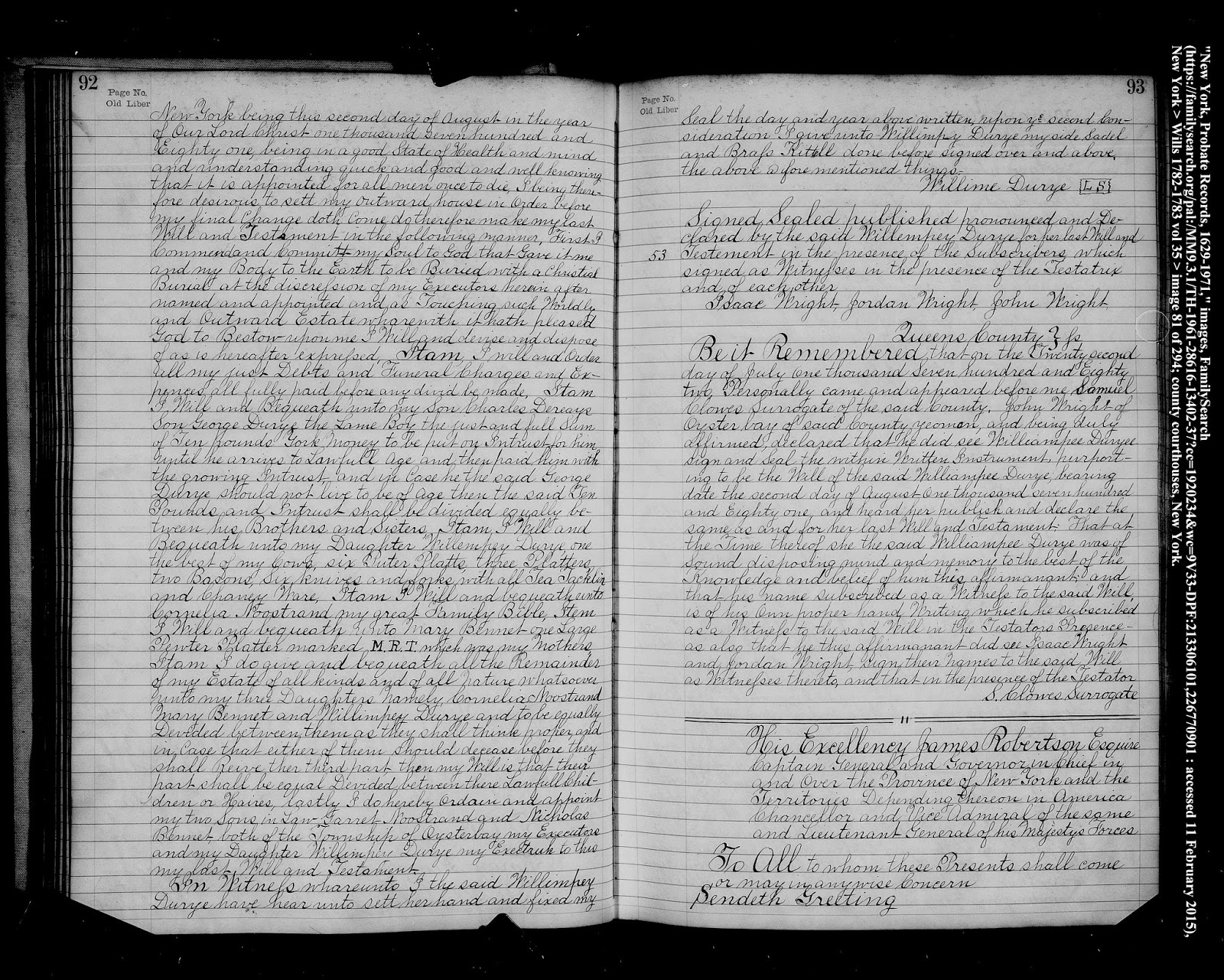 Email ThisBlogThis!Share to TwitterShare to FacebookShare to Pinterest
Labels: Duryea, probate, Terhune, will